Erdoğan-Putin meeting at G20 may overshadow talks with Merkel 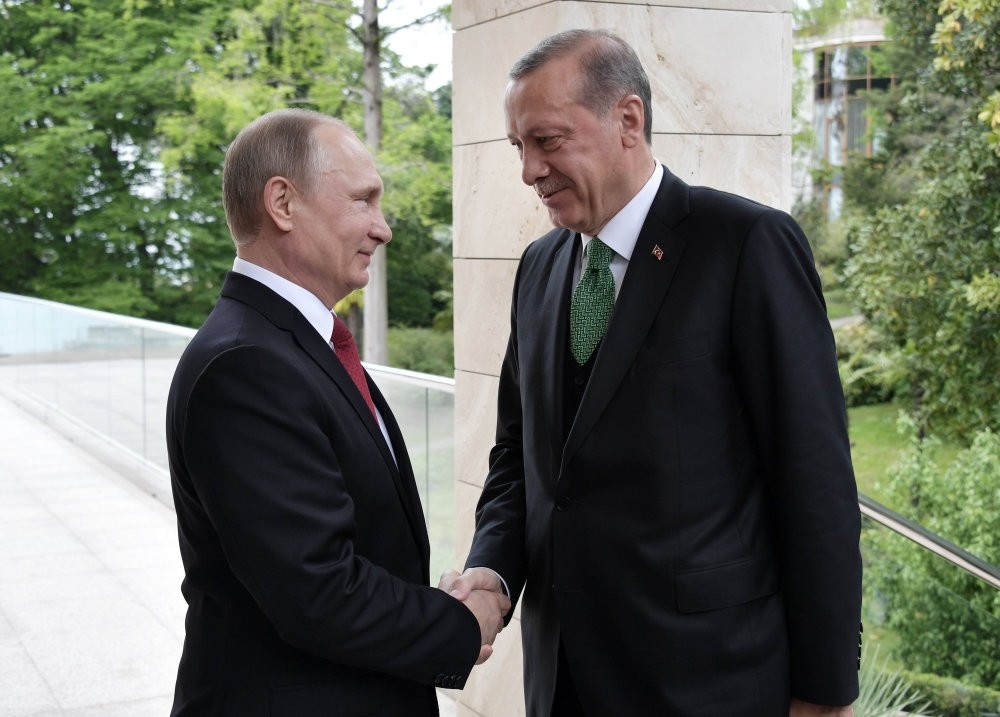 Russian President Vladimir Putin shakes hands with Turkish President Recep Tayyip Erdou011fan during their meeting at the Bocharov Ruchei residence in the Black sea resort of Sochi, Russia, May 3.
by Şeyma Nazlı Gürbüz Jul 07, 2017 12:00 am

Since relations between Turkey and Germany are worsened recently over issues such as the PKK presence in Germany and the withdrawal of German troops from İncirlik Base, it is likely that Erdoğan's G20 meeting with Merkel will be overshadowed by the Erdoğan-Putin meeting, which is expected to bear some crucial points that are related to the planned operation in Afrin, Syria

As world leaders convene in Hamburg for the G20 summit, President Recep Tayyip Erdoğan is expected to hold meetings with several world leaders, including Russian President Vladimir Putin and German Chancellor Angela Merkel, in which the president is likely to discuss bilateral issues regarding politics, trade and energy. While experts claim that the meeting between Erdoğan and Putin will be significant in regards to the Syrian crisis, his meeting with Chancellor Merkel could prove fruitless as tensions between Ankara and Berlin have persisted; particularly over security issues.

According to Russian news agency TASS, President Erdoğan is expected to hold a separate meeting on the sidelines of the G20 summit with his Russian counterpart. Emphasizing the importance of the Putin-Erdoğan meeting, an academic from the International Relations Department of Istanbul Kültür University, Bora Bayraktar, said that the main topic of the meeting is likely to be the Syria crisis. "I think these two countries which have been largely excluded from Europe may make an appearance during the summit," Bayraktar asserted. "The main issue during the meeting will likely be Syria - particularly the Afrin operation - since Turkey requires Russia's support for its success." Turkey and Russia have played a key role in the establishment of a nationwide cease-fire in the war-torn country, with the two countries agreeing on the evacuation of Aleppo in late December 2016.

After that, along with Iran, the three countries took the initiative to bring the Bashar Assad regime and the opposition to the table in Astana to sustain a cease-fire agreement and to negotiate a political transition in the country. During a meeting in the Kazakh capital on May 4, the three countries signed a deal for the establishment of de-escalation zones in Syria, without the U.S.'s blessing.

Meanwhile, Turkey is in detailed talks with Russia over the conflict in Syria, Deputy Prime Minister Numan Kurtulmuş said yesterday.

Two weeks ago, Turkey reinforced its border near Afrin in northern Syria and shelled the PKK and Democratic Union Party (PYD0 in retaliation for attacks on the Turkish-backed Free Syrian Army (FSA). It has been suggested that Russian and Turkish troops could cooperate in northern Syria to create buffer zones between Russian-backed regime forces to the south and opposition forces in the north.

"The Russians know our sensitivity and they know our disturbance, especially in relation to presence of the PYD/YPG [People's Protection Units] elements in the Afrin region," Kurtulmuş added.

On the other hand, Ankara and Moscow are currently in the final stages of signing a deal on the procurement of S-400 air defense systems. Turkey has also made energy deals with Russia, as seen with the so-called TurkStream pipeline that would bring Russian gas to Europe, bypassing Ukraine.

German Chancellor Merkel was also scheduled to meet with President Erdoğan last night, on the eve of the G20 summit, her spokesman said Wednesday as tensions simmer between Ankara and Berlin.

"I don't expect any major results from the Erdoğan-Merkel meeting, since the problems between the two countries cannot be easily solved," Bayraktar contended, referring to Ankara's disapproval regarding terror-related issues such as Germany's support for the PKK terrorist organization in the country as well as Berlin's failure in keeping its promises regarding the refugee crisis.

"Germany, on the other hand," he added, "has its own concerns such as the recent Incirlik Air Base crisis. These are all serious problems. I don't think that they can be solved."

Turkey strongly condemned Germany and issued a diplomatic note to the country on Tuesday over an anti-Erdoğan banner was displayed in front of the German Chancellery ahead of the G20 Summit in Hamburg.

A banner on a new car was put in front of the German Federal Chancellery reading, "Do you want to win this car? Then kill the dictatorship" ahead of the gathering of the world's 20 leading economic powers, including Turkey, in Hamburg on Friday and Saturday.

In a written statement, the Foreign Ministry "strongly condemned" the incident, saying that the banner, in question, openly called for violence.

Nurşin Güney, an international relations professor at Yıldız Technical University (YTÜ) says no steps have been taken to deal with the problem, saying Germany is trying not to break its relations with Turkey.

"The upcoming elections in Germany are also an important reason for this hardened rhetoric which is being embraced by the mainstream political parties to attract more people," Güney said, adding that the bonds that Turkey has with Germany are unbreakable especially as far as trade relations are concerned.

Last month, the Bundestag approved a plan to remove its troop reconnaissance aircraft from Incirlik Air Base in the southeastern Turkish province of Adana, opting instead to relocate their troops to an air base in Jordan.

German-Turkish relations have been strained in recent months, after German local authorities canceled the public appearances of Turkish ministers and government officials campaigning ahead of the April 16 referendum in several German towns and cities, based on poor excuses such as the inadequacy of parking and security concerns, while allowing pro-PKK events and Turkish opposition officials to rally for the "no" campaign.

Last week, Berlin refused to allow Erdoğan to address members of the large ethnic Turkish community in a rally in Germany ahead of the G20 summit.

Despite this, Güneş emphasized that, "Summits like the G20 are useful for providing a base for dialogue between the countries. It is important for both sides to meet and engage in dialogue," emphasizing the significance of the summit for Turkey, allowing the country to directly express its concerns as well as demands to other world powers.