Tillerson hopes to rebuild damaged trust between US and Turkey 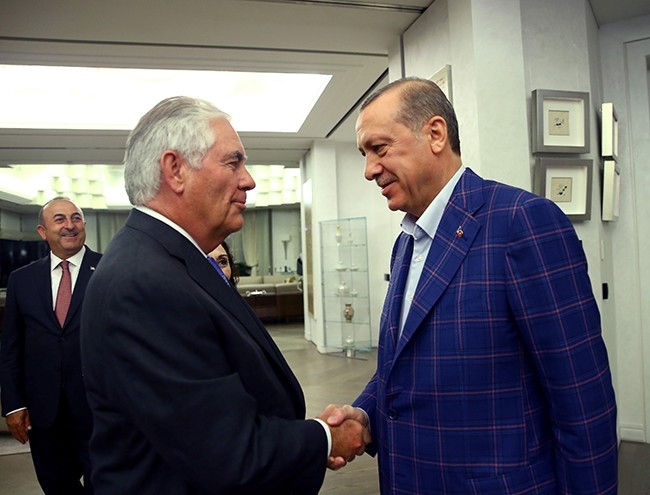 U.S. Secretary of State Rex Tillerson acknowledged severe strains in U.S.-Turkey relations Monday, but said that he's hopeful of mending ties with the NATO ally and partner in the anti-Daesh coalition.

"I think our relationship here in Turkey which has been under some stress for some time, I hope we are beginning to put it on the mend. We're beginning to rebuild some of that trust that we lost in one another: they lost our trust to a certain extent, we lost theirs, so I think we are working very hard to rebuild that level of trust and that is the basis for any relationship," Tillerson said.

Secretary of State said that since becoming secretary of state he had met three times with President Recep Tayyip Erdoğan and that each time the tone had improved. Tillerson said challenges remain but the first steps to re-establishing relations "on the proper basis" have been taken.

"This is an extraordinarily important relationship to the United States for many, many reasons that you would well understand from a security standpoint to the future economic opportunities as well and the important geography just by luck of Mother Nature that the citizens of Turkey occupy at this crossroads of the world," Tillerson said.

Washington's extended backing of the YPG remains a troubling issue marring U.S.-Turkish relations and caused tension in the relationship between Washington and Ankara as Turkey considers the YPG to be the Syrian affiliates of the PKK, a proscribed terrorist organization in the U.S., Turkey and the EU.

Back in May, the U.S. announced that it will equip the "Kurdish elements" of the U.S.-backed Syrian Democratic Forces (SDF), which are mainly formed by the YPG, with mortar shells, heat-seeking missiles, heavy machine guns, automatic weapons, heavy automatic weapons, armored vehicles and tanks.

The U.S. claims that it supports the SDF, despite the group being predominantly led by the YPG and says that supporting the SDF is the only option for defeating Daesh while Ankara says an alternative would be to work with local Arab tribes backed by countries in the region instead of supporting what it calls a "terrorist group." Turkey argues that the support given to the YPG in Syria is ultimately transferred to the PKK, and then used against its citizens.

In addition, the YPG's political wing the Democratic Union Party's (PYD) has also been accused of committing crimes against Arab and Turkmen locals in northern Syria as part of what is being called an attempt to implement demographic changes in the region. The PYD's policies of forced migration imposed on Arabs and Turkmens, as well as its arbitrary arrests of critical voices and the recruitment of child soldiers, have been widely covered by international human rights groups including Human Rights Watch (HRW), Amnesty International and KurdsWatch.