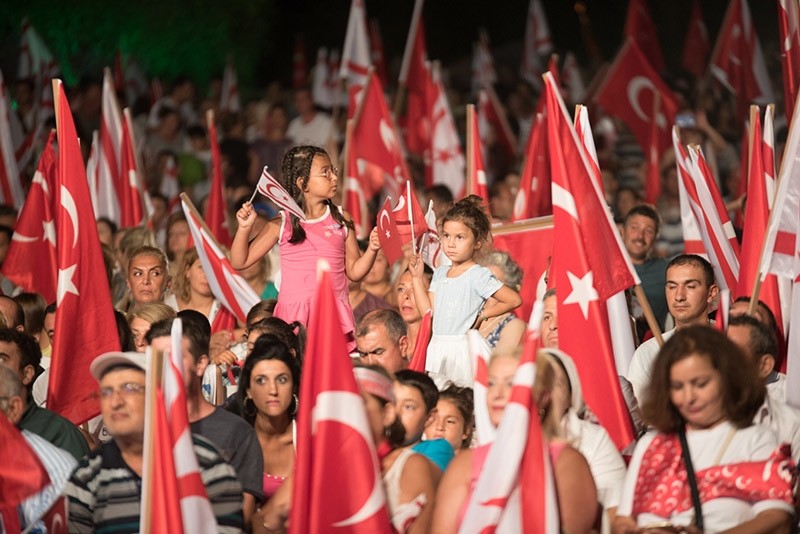 People gather with Turkish and TRNC flags to celebrate Peace and Freedom Day at Yavuz u00c7u0131karma (Five Mile) Beach, which was used by Turkish Army to launch their operation in 1974, Turkish Republic of Northern Cyprus, July 20, 2017. (AA Photo)
by Daily Sabah with AA Jul 20, 2017 12:00 am

Ankara has reiterated its support regarding both the rights of Turkish Cypriots on the ethnically divided island of Cyprus and in the Eastern Mediterranean during events marking the 43rd anniversary of Turkey's intervention for peace purposes on the island.

Prime Minister Binali Yıldırım said Thursday that Turkish Cypriots can depend on Ankara for support, reiterating that the Turkish government will "continue protecting the rights of Turkish Cypriots in the Eastern Mediterranean."

Speaking in Turkish Cyprus where he attended ceremonies marking the 43rd anniversary of Turkey's 1974 intervention in the Cyprus conflict as a guarantor power, Yıldırım commented on recent U.N.-backed reunification talks between Greek and Turkish Cyprus, saying: " Turkish Cypriots have paid the price for the uncompromising approach of the Greek side for years in what is a serious contradiction and a gross injustice."

"The rights and prosperity of Turkish Cypriots are a national concern for us," the prime minister said. Yıldırım also said that "unfair steps" taken by Greek Cyprus have only encouraged further deadlock in the talks. "It has been made clear that Greek Cypriots are not ready for a solution," he added.

President Recep Tayyip Erdoğan's office released a written statement regarding Ankara's support for Turkish Cyprus: "Turkey will continue as it has until today to side with Turkish Cypriots, continuing to support … while providing an assurance for peace, freedoms and stability both on the island and in the eastern Mediterranean Sea."

Presidential spokesman İbrahim Kalın yesterday commented on the failed negotiation talks, as well. Stressing that Ankara has always taken a positive approach to reunification talks, Kalın said: "The two sides could not reach the desired point because of obstacles from Greek Cypriots, despite our constructive approach to the issue."

Kalın called on the international community to lift sanctions and the isolation policy on Turkish Cyprus.

Yıldırım said the 1974 operation was "a turning point in the island's history," adding that Turkey has shown the world that it will not allow "enosis," a Greek takeover of Cyprus.

He also recalled how negotiations on Cyprus resumed after a failed 2004 deal put forward by former U.N. Secretary General Kofi Annan to reunify the Turkish Cypriot and Greek Cypriot communities.

The plan was rejected in a referendum by the Greek half of the island, whereas Turkish Cypriots voted in favor of the Annan plan.

Yıldırım said Turkish Cypriots had "passed the exam" by voting for the referendum. Greek Cypriot opposition to coexistence "continues today," he contended.

The Eastern Mediterranean island has been divided since 1974, when Turkish soldiers interceded under Ankara's guarantor status to protect the Turkish Cypriot community from unrest.

Violence broke out during a Greek Cypriot attempt to forcibly unite Cyprus with Greece, then ruled by a right-wing, military junta. In what became known as Operation Atilla, Turkey sent 40,000 troops to the island's north.

As a result of Greek Cypriot attacks, at least 30,000 Turkish Cypriots were displaced and forced to seek refuge elsewhere.