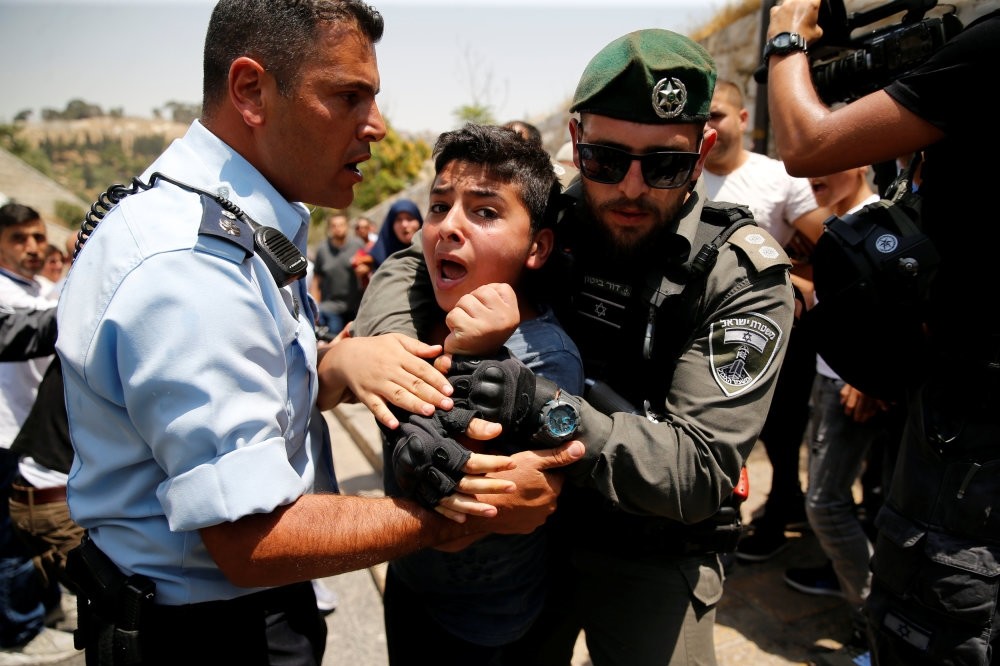 A Palestinian youth is detained by an Israeli border police officer during scuffles that erupted after Palestinians held prayers just outside Jerusalem's Old City
by Yunus Paksoy Jul 21, 2017 12:00 am

Ankara has voiced concern over Israel's new security measures on Al-Aqsa Mosque, which has been said to violate the rights of Palestineans. Turkey's head of Religious Affairs Mehmet Görmez urged all parties to employ a realistic perspective on the decades-long issue

Concerns in Ankara regarding Israel's alleged plans to change the status-quo at the Al-Aqsa Mosque are mounting amid heightened security measures against Muslims and the closure of the mosque for Friday prayers last week, for the first time in 50 years.

The head of Turkey's Presidency of Religious Affairs (DİB), Mehmet Görmez, told Daily Sabah that the developments serve as a wake up call to the Muslim world, urging Muslims not to let the Al-Aqsa Mosque fall to the same fate as that of the Al-Khalil Mosque, which was divided in 1994 following an attack by an Israeli that left more than 50 people dead.

"At a crucial time when Turkey is engaged in a fight against the [Gülenist Terror Group] FETÖ and there are escalated tensions in the Gulf, what they tried to do to Al-Khalil will also happen to Al-Aqsa. We are witnessing it," Görmez said, calling on all parties to adopt a realistic perspective on the issue.

Presidential spokesman İbrahim Kalın also voiced Ankara's deep concerns regarding the status quo at the Al-Aqsa Mosque. "It is unacceptable for the entry of Muslims and Palestinians to the mosque to be blocked. We interpret the move as a shift in the status-quo at the Al-Aqsa Mosque," Kalın said, stressing that the people of Palestine and the Al-Aqsa Mosque are not alone.Tensions recently escalated dangerously in and around the mosque after three Palestinians and two Israeli soldiers died in a shootout on July 14. In response, the Israeli government quickly shut down the mosque, blocking Friday prayers for the first time in decades.

Israel also set up X-ray machines and surveillance cameras around the mosque in response to last Friday's incident, in a move that has been likened by Muslims to the current situation at the Al-Khalil Mosque. Some Muslims fear that Al-Aqsa Mosque may see a similar fate.

"This is unjustified. There have been several crimes committed by the Israeli military there and even then they did not shut down Al-Aqsa. There should not be any connection between what happened in the morning and its closure for afternoon prayers," Al-Aqsa Mosque imam Ekrima Sabri recently said.

Kalın said that the entire world - especially the West and Arab Gulf states - should raise their voices in response. "We call on all sides, including the West, the Arab world and Europe, to raise their voices. It is saddening to see Muslim countries waste their energy on other things," he said.Görmez called on the international community to speak out regarding the issue, as well. He stressed that "those who are in support of peace, composure and common sense on the face of the earth, regardless of their personal beliefs, should take action." He underlined that setting up X-ray machines and tightening security measures are signs that "They now want to play the game that was played at Al-Khalil some 23 to 24 years ago."

Amid the unexpectedly high tensions at Al-Aqsa Mosque, Washington urged Israel to retain the status quo. "The U.S. is very concerned about tensions surrounding the Temple Mount/Haram Al-Sharif, a site that is considered sacred and holy according to Jews, Muslims and Christians," the White House said in a statement late Wednesday.

"The U.S. calls upon the state of Israel and the Hashemite Kingdom of Jordan to make efforts in good faith to reduce tensions and to find a solution that assures public safety and the security of the site while maintaining the status quo," the White House said.

Despite calls from Turkey's top religious authority and the White House to de-escalate tensions, protests and the reaction of the Israeli security forces around Al-Aqsa have been violent.

Sabri was discharged from the hospital on Wednesday after he was injured by a rubber bullet shot by Israeli forces a day earlier. The Palestinian Red Crescent said 34 people were injured in the ensuing clashes as the police forced worshippers away from the mosque.

While Israeli security forces lashed out in response to Muslim protests, tensions were further inflamed at the holy site when a large group of hard-liner Israelis reportedly stormed the Al-Aqsa compound on Thursday morning.

In an unauthorized move, some 182 Israeli settlers entered the mosque compound, guarded by Israeli police, according to a written statement from Firas al-Dibs, a media official in Jerusalem's Islamic Endowments Department.

Muslims fear that Al-Aqsa may become the new Al-Khalil, due to the tragedy that unfolded in 1994. Al-Khalil has always been revered as a holy site for Muslims and, on February 25, 1994, an Israeli stormed Al-Khalil during Ramadan, firing indiscriminately on people as they prayed inside the mosque. The initial death toll stood at 29 with more than 200 wounded. It is now estimated that 50 to 70 people were killed in the massacre.

Since the attack, the Al-Khalil Mosque has been divided between Muslims and Jews, and today's heightened security measures have been considered the norm there for more than 20 years.

Jerusalem Grand Mufti Mohammed Ahmed Hussein does not seem to approve of Israel's actions in and around Al-Aqsa, either. Hussein claimed that Israel is trying to change the status quo at Al-Aqsa by setting up metal detectors, surveillance cameras and turnstiles at the site's entrance, shuttering the site for a Friday prayer.