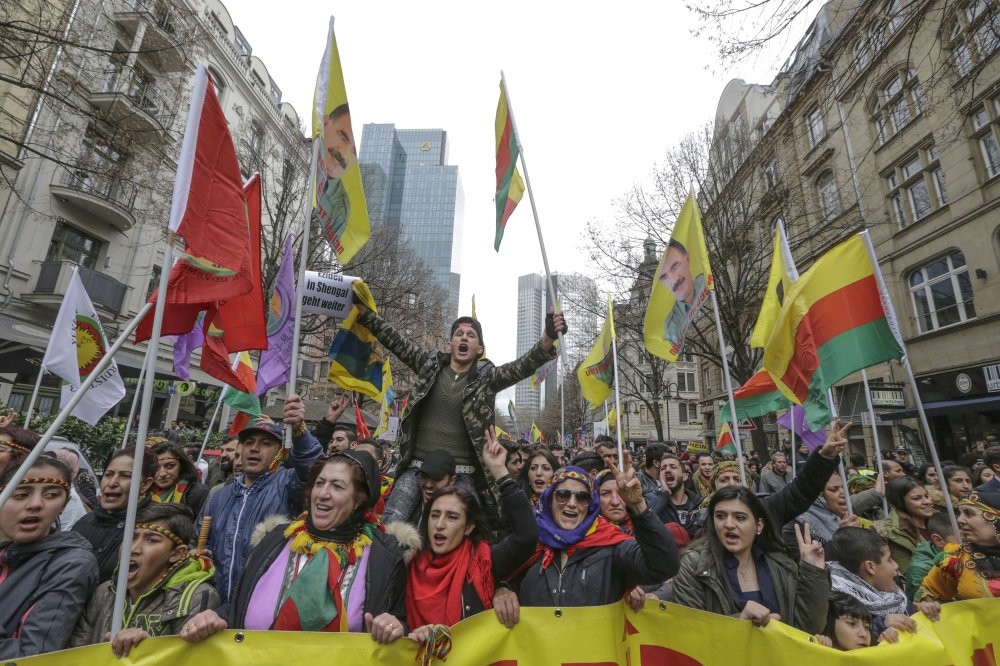 PKK sympathizers hold posters of Abdullah u00d6calan, the head of the outlawed PKK terrorist organization, during an event in Frankfurt, Germany, March 18.
by Daily Sabah Jul 22, 2017 12:00 am

As tensions between Turkey and Germany increase, Turkish authorities have criticized Germany as being a safe haven for terrorist organizations and also misleading companies by making remarks on possible economic sanctions on Turkey

Turkish politicians on Friday harshly criticized what they called Germany's tolerance and support for the PKK and the Gülenist Terror Group's (FETÖ) activities in its borders amid new tensions between the two NATO allies. Speaking at an event on Friday for a hospital that will be built in Istanbul, President Recep Tayyip Erdoğan criticized Germany for the PKK activities in its borders.

"The government that hides terrorists running away from Turkey should answer these first: Why do terrorists fleeing Turkey hide in Germany? How do they explain the financial support given to them? How does Germany explain the PKK, which has been banned in Europe, holding rallies in its streets under police protection? Germany should pull itself together, they cannot scare us with these threats," Erdoğan said.

Turkey has long criticized Germany for not taking serious measures against the PKK, which carryies out propaganda, recruitment and fundraising activities in the country. Germany outlawed the PKK in 1993, but German authorities have been reluctant to take strong measures against the activities of the group, despite repeated warnings from Turkey.

A recent report released by the German Interior Ministry revealed a sharp increase in offences committed last year by the terrorist group.

In 2016, crimes committed by PKK followers in Germany increased 97.6 percent to 1,597 cases, according to the report. Many of the incidents involved PKK followers violating demonstration and assembly laws, the report said.

In addition, while local German authorities also canceled public appearances by Turkish ministers and government officials campaigning ahead of the April 16 referendum in several German towns and cities based on reasons such as the inadequacy of parking lots and security concerns, they have allowed pro-PKK events, including senior PKK figures addressing crowds via video conference.

On Friday, Prime Minister Binali Yıldırım said that Turkey wants Germany to take serious measures against the terrorist groups. "My call is to act with deliberateness. No good can come from both countries worsening their relations. Our biggest dispute is over FETÖ's large presence in Germany and the acts against our country," Yıldırım said, emphasizing his concerns over the issue. Yıldırım added that the Turkish nation would be deeply hurt if terrorists were actually being protected, referring the large population of people of Turkish origin in Germany.

Germany has refused to extradite asylum seekers who were involved in the failed coup attempt led by FETÖ last year, leading Ankara to deny German lawmakers access to two NATO air bases in Turkey where German soldiers are stationed.

Germany has also granted political asylum to a number of former military personnel and their families who hold diplomatic passports and have suspected links to FETÖ, the German media reported in May.

A senior figure of FETÖ – the group accused of masterminding the bloody coup attempt in Turkey last year – reportedly told German media on Thursday that Germany will become "a new center" for the group. Ercan Karakoyun, who heads the prominent FETÖ-linked Foundation for Dialogue and Education in Germany, told German weekly Die Zeit in an interview that "[t]he [Gülen] movement cannot survive in Turkey."

German Foreign Minister Sigmar Gabriel announced Thursday a range of steps to be taken against Turkey in response to the detention of Peter Steudtner, who Turkish authorities have accused of terrorism but is described as a human rights activist by the German government.

Ten suspects, including Steudtner, Swedish national Ali Gharavi and Amnesty International Turkey director İdil Eser, were detained after Turkish police raided a meeting held at a hotel on the island of Büyükada, across the shore from Istanbul, for allegedly planning provocative events that would fuel unrest across Turkey. Six suspects were arrested on terrorism charges, while four suspects were released under judicial control.

Erdoğan also slammed remarks from German politicians on imposing economic sanctions: "I condemn the baseless remarks made by the German economy minister, which was an attempt to scare and make the companies that invest in Turkey uneasy. These [remarks] do no suit politics and those in a representational position in politics."

He added that the claims that Turkish intelligence was investigating Germany companies were not true and that he had confirmed this with both the Interior Ministry and Turkey's intelligence agency, the National Intelligence Organization (MİT).

"We need to stay away from statements that could worry investors. Turkey is a safe country. It is as safe as Germany," Yıldırım also said.