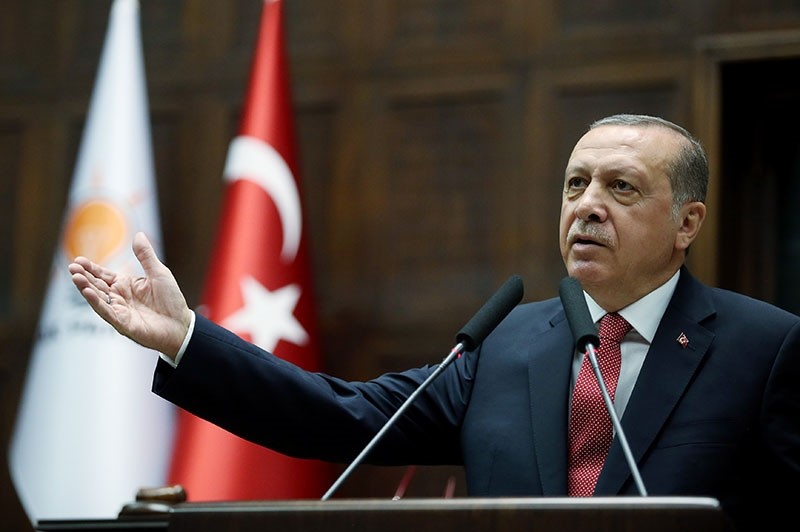 Erdoğan said Tuesday that Israel's recent security measures and violent attitude in and around the Al-Aqsa Mosque against Muslims are aimed at taking the holy site away from the Islamic community. Expressing Ankara's frustration over the recent incidents at Al-Aqsa at the AK Party parliamentary group meeting in Ankara, Erdogan said: "What Israel is doing at the moment is an attempt to take Al-Aqsa Mosque away from Muslim hands."

"Israel's legitimacy makes sense to the extent it respects the rights of itself, Palestine and Palestinians" Erdoğan said.

The president addressed the Islamic world, calling on every Muslim to do their part to protect Al-Aqsa. "When Israeli soldiers carelessly pollute the ground of Al-Aqsa with their combat boots, using simple issues as a pretext and then spilling blood there, the reason [they are able to do that] is we [Muslims] have not done enough to stake our claim over Jerusalem."

Addressing a press conference at the MHP headquarters in Ankara, Bahçeli said Israel's governance was no different from terrorism. "Israel has suppressed and even suspended the freedom of thought and faith [in Jerusalem]."

The CHP chairman said: "The Israeli government must recognize our sensitivities. There shall be no violence at the prayer site, those praying cannot be kicked, it is an essential duty as a human being to respect every faith," he added.

Erdoğan said protection of the Islamic holy site is not a just a matter about whether it is possible to do more to protect the site, but a matter of faith. "Those who are able to should visit Al-Aqsa. Those who cannot visit Al-Aqsa should send aid to our brothers there."

Prefacing that Israel would be harmed the most by not respecting the holiness of the site, Erdoğan said that "invading" the compound and preventing Muslims from entering the area is a sign that it might be the last straw. "Everyone that knows Israel and the region well will accept that the goal here is not about security worries but entirely isolating Muslims from Al-Aqsa Mosque."

The MHP leader said the Turkish nation is "aware of the plot" being staged in Jerusalem, urging Israeli authorities to respect the sanctity of Al-Aqsa and stop violating the rights of life and property of Palestinians. "The Zionist mentality, which has tried every dark way to do religious and ethnic cleansing in Jerusalem, will surely be embarrassed and defeated," Bahçeli said.

Bahçeli also condemned attacks targeting synagogues and the Jewish community in Turkey: "Any harm to our Jewish citizens or their religious preferences and beliefs is an ugliness that is incompatible with Turkey and the Turkish nation, and we can never approve of it."

As the term president of the Organization of Islamic Cooperation (OIC), Erdoğan previously said Al-Aqsa "not only belongs to the Palestinians, it is also honored and considered a sacred place by 1.7 billion Muslims worldwide."

"As the term president of the Organization of Islamic Cooperation, I call on Israel once more to act in line with the rule of law and basic human values. I would like to underline once again that [Israel] should avoid steps that would further escalate tensions," he added.

Israel took the controversial decision to close the Al-Aqsa Mosque compound for Friday prayers last week, leading to anger from Muslims and Jordan, the holy site's custodian. The mosque was closed and Friday prayers canceled for the first time since Israel occupied East Jerusalem in 1967, after a gunfight inside the compound on the morning of July 14 killed two Israeli police officers and the three Palestinian attackers.

Three Palestinians were killed on Friday in protests against the Israeli measures around the holy site. Three Israelis were also killed in an attack in a settlement in the West Bank.

The area referred to as the Temple Mount by Jews, which Al-Aqsa is built on top of, is central to the Israeli-Palestinian conflict, with Palestinians fearing Israel may one day seek to assert further control over it. It is located in East Jerusalem and was annexed in a move not recognized by the international community. It is the third holiest site in Islam and is the most sacred site in Judaism. Jews are allowed to visit but not pray there to avoid provoking tensions.

The head of Turkey's Presidency of Religious Affairs (DİB), Mehmet Görmez, recently told Daily Sabah that the developments should serve as a wakeup call to the Muslim world, urging Muslims not to let Al-Aqsa Mosque fall to the same fate as that of the Al-Khalil Mosque, which was divided in 1994 following an attack by an Israeli that left more than 50 people dead.

Al-Khalil has always been revered as a holy site for Muslims and, on Feb. 25, 1994, an Israeli stormed Al-Khalil during Ramadan, firing indiscriminately on people as they prayed inside the mosque. Since the attack, the Al-Khalil Mosque has been divided between Muslims and Jews, and today's heightened security measures have been considered the norm there for more than 20 years.

Israel occupied East Jerusalem during the 1967 Six-Day War. It later annexed the city in 1980, claiming all of Jerusalem as the Jewish state's "eternal" capital -- a move never recognized by the international community.