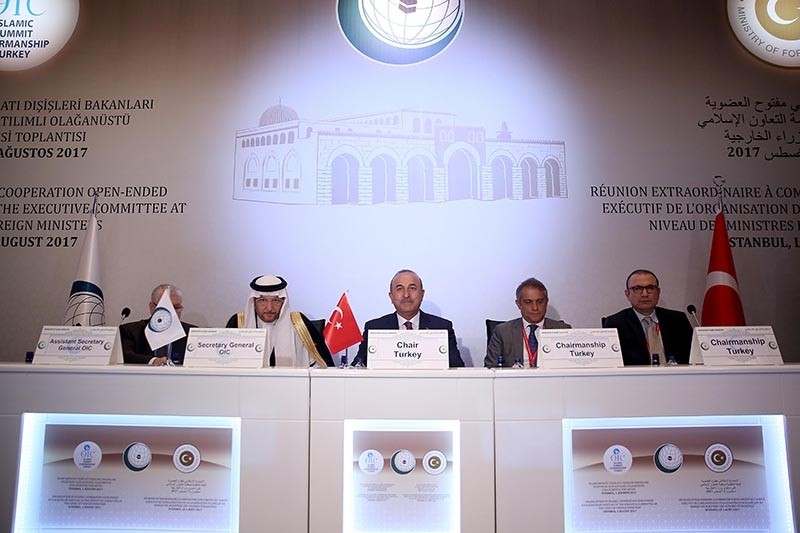 Foreign Minister Mevlüt Çavuşoğlu has stressed that a two-state solution is necessary to solve the Palestinian issue, urging all members of the Organization of Islamic Cooperation (OIC) to support the efforts for Palestinian statehood.

The OIC held an extraordinary meeting with the participation of the foreign ministers of OIC member states in Istanbul on Tuesday, following weeks of controversy that has overshadowed Israeli actions at Jerusalem's Al-Aqsa Mosque in the wake of a deadly shootout.

Speaking at the OIC Foreign Ministers' meeting, Foreign Minister Çavuşoğlu stressed that one of the main responsibilities of OIC member states is to support Muslims and to preserve Islamic heritage in Jerusalem, noting: "It is our mission to support Jerusalem. A possible divergence between us would be beneficial only for the enemies of Islam. We shouldn't forget that if we show dissent, the enemies of Islam will be content.

"With our actions, let's support the millions of Palestinians who have been forced to stay under Israel's occupation or fled abroad" Çavuşoğlu said.

"We invite everyone who raised their voice to stop this injustice and recognize the Palestinian state," he said.

"A two-state solution is a must. We support the revitalization of the [Israeli-Palestinian] peace process. However, failure to obey law and fairness will not bring perpetual peace. We should support the millions of Palestinians with our actions - not words. An independent Palestinian state whose capital is in East Jerusalem must be formed in conformity with its 1967 borders. Restrictions or prohibitions cannot be accepted. We have been strict followers of the situation and we will stand by our Palestinian brothers in their fight," Çavuşoğlu said.

On the sidelines of the meeting, Çavuşoğlu met with the Secretary General of the OIC Yousef Al-Othaimeen and also met with his Iranian counterpart Javad Zarif and his Malaysian counterpart Dato' Sri Anifah Aman.

Anger has spilled across the West Bank since Israel shut the Al-Aqsa Mosque compound following a deadly shootout on July 14. The site is venerated by Muslims as the Haram al-Sharif, or Noble Sanctuary and the Jews, who call it the Temple Mount. Israel's recent restrictive measures have drawn widespread international condemnations, also from Turkey. As the term president of the Organization of Islamic Cooperation (OIC), Turkish President Recep Tayyip Erdoğan previously said Al-Aqsa "not only belongs to the Palestinians, it is also honored but is also considered a sacred place by 1.7 billion Muslims worldwide."

"As the term president of the [OIC], I call on Israel once more to act in line with the rule of law and basic human values. I would like to underline once again that [Israel] should avoid steps that would further escalate tensions," he added.

Meanwhile, thousands of people gathered Sunday at one of Istanbul's biggest squares to show solidarity with Palestinians over the recent Israeli restrictions at the Al-Aqsa Mosque in Jerusalem.

Facing international criticism and pressure, Israel's Security Cabinet decided late Monday to remove the metal detectors. A statement released after the meeting said a new surveillance system using "smart checks" based on advanced technology would be put in place.

The OIC consists of 57 member states, and was founded in 1969 and Turkey currently holds the OIC presidency.