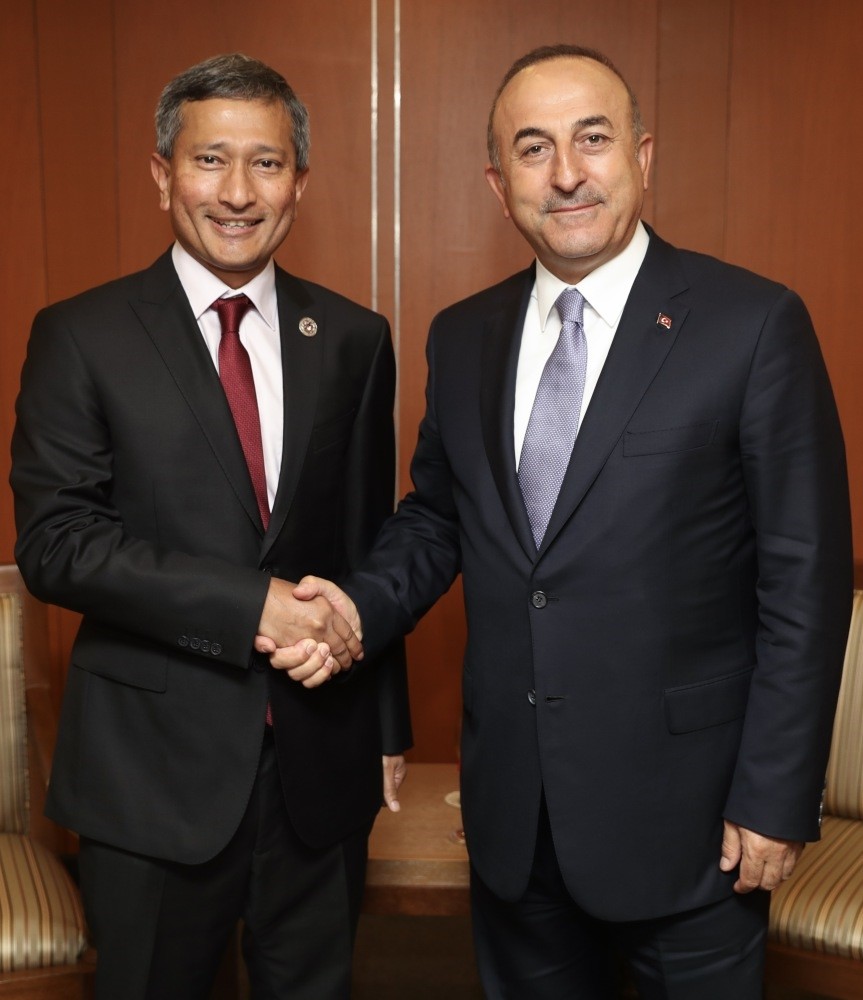 Foreign Minister Mevlu00fct u00c7avuu015fou011flu (R) had a meeting with the foreign ministers of several Asian countries, including Foreign Minister of Singapore Vivian Balakrishnan (L), during the Association of Southeast Asian Nations (ASEAN).
by Daily Sabah Aug 05, 2017 12:00 am

Foreign Minister Mevlüt Çavuşoğlu visited Manila, the capital of the Philippines, on Friday to participate in the 50th Foreign Ministers meeting of the Association of Southeast Asian Nations (ASEAN). On the sidelines of the ASEAN meeting, Çavuşoğlu also held bilateral talks with the foreign ministers of Cambodia, Brunei, Sri Lanka, Philippines and Singapore on Aug. 4. According to diplomatic sources, Çavuşoğlu's talks focused on Turkey's application to the ASEAN sectoral dialogue partnership. Bilateral trade opportunities with ASEAN members and the revitalization of the mixed economic committee meetings were also among the issues discussed between Çavuşoğlu and his counterparts. Çavuşoğlu informed his counterparts that in the near future Turkey will open an embassy in Laos and therefore the country will have diplomatic missions in every ASEAN country.

Turkey, which has been invited as a guest to the ASEAN meetings since 2013, aims to develop bilateral relations with the countries in the Asia-Pacific region, as they have an increasing importance in international politics, the global economy and commerce. Turkey's decision to establish institutional ties dates back to 1999. Turkey became a signatory of the ASEAN Treaty of Amity and Cooperation in Southeast Asia (TAC) on July 23, 2010, and thus, the foundation of sectoral cooperation was laid down.

ASEAN was established in 1967 and includes 10 states: Brunei, Cambodia, Indonesia, Laos, Malaysia, Myanmar, Philippines, Singapore, Thailand and Vietnam. The ASEAN declaration states that the main aim of the organization is to accelerate the economic growth, social progress and cultural development of the region.