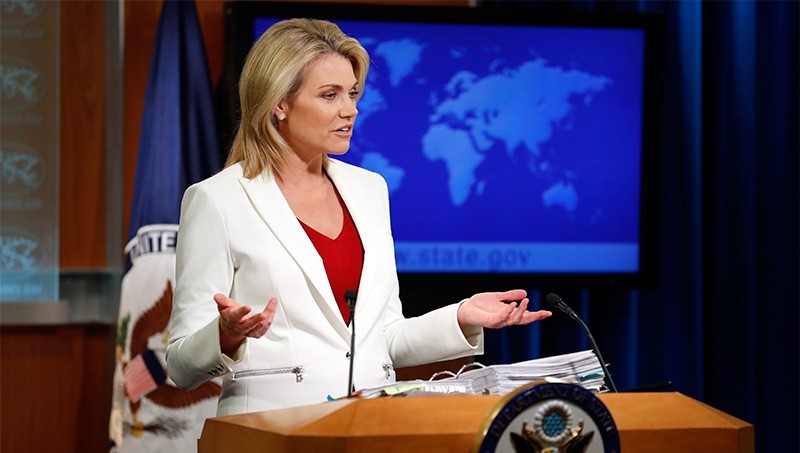 Speaking at a daily press briefing, Nauert said that the U.S. considers Turkey as "an important and valued NATO ally."

In response to a question about if the U.S. is concerned about a potential Turkish attack on PKK's Syrian offshoot YPG, Nauert said the U.S. and Turkey have ongoing discussions regarding the issue.

"They have legitimate concerns with the PKK. We understand that. There are concerns about the region overall, and we condemn ongoing attacks committed by the PKK" Nauert said, adding that the U.S. considers the PKK to be a terror organization.

Nauert avoided responding to the question asking if the U.S. would oppose a Turkish attack on the YPG, saying that it's a hypothetical question and she "will not get into anything hypothethical."

Turkey considers the Democratic Union Party (PYD) and its armed wing, the YPG, to be Syrian affiliates of the PKK, a proscribed terrorist organization according to the U.S., Turkey and the EU.

The PYD has come under the spotlight for its crimes against Arab and Turkmen locals in northern Syria, as part of its attempt to implement demographic changes in the region. The PYD's policies of forced migration for Arabs and Turkmens, as well as its arbitrary arrests of critical voices and recruitment of child soldiers, have also been covered by international human rights groups, including Human Rights Watch (HRW), Amnesty International and KurdsWatch.

Continuous U.S. support for the YPG has caused tensions in relations between Washington and Ankara while the former says that supporting the YPG is the only option to defeat Daesh and the latter says an alternative could be found with local Arab tribes, backed by countries in the region, rather than supporting and arming "a terrorist group."