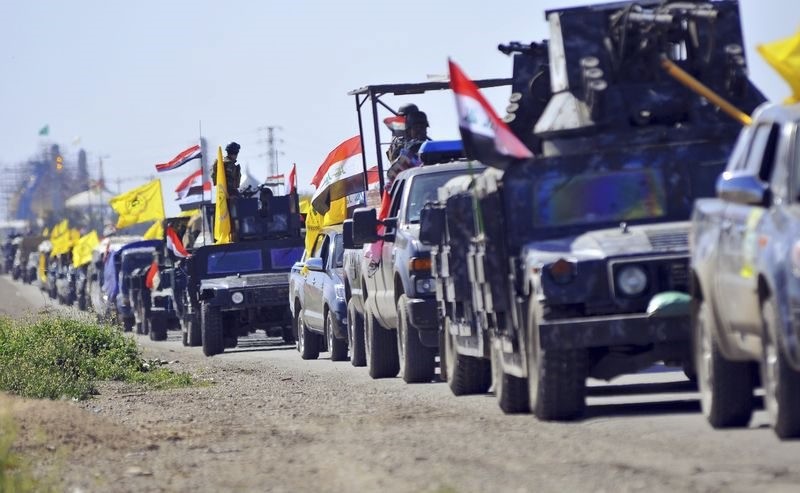 Hashd al-Shaabi militias has had an ill-famed past as human rights groups have long accused them of being involved in extrajudicial killings, abuse and the theft or destruction of property in areas from which they drove out Daesh.
by Yunus Paksoy
Aug 14, 2017 12:00 am

A U.S. officer spoke to Daily Sabah and declared its approval on the Iran-backed Shiite paramilitary group Hashd al-Shaabi's spearheading of the offensive on the Turkmen-populated Tal Afar province of Iraq, despite Turkey and the local Sunni Arab population's staunch opposition, citing the armed group's bad record on human rights

The United States is fully behind the Iranian-backed Shiite paramilitary group Hashd al-Shaabi in its quest to take full control of the Turkmen-populated Iraqi town of Tal Afar in defiance of staunch opposition by the Turkish government, a high ranking military officer from the U.S.-led coalition told Daily Sabah. Tensions in Ankara are soaring as Hashd al-Shaabi closes in on Tal Afar, and Washington does not seem to shy away from going head to head with the Turkish government over another regional issue.

"The Coalition will support the government of Iraq in its plan to liberate Tal Afar and other areas of Iraq from Daesh control," Army Colonel Joseph Scrocca from the U.S.-led coalition said. Time is ebbing for the Tal Afar offensive as a spokesman for the Iraqi military, Brigadier General Yahya Rasool, said last week, "The Iraqi army and Hashd al-Shaabi forces surrounded Tal Afar to take back the town from Daesh." A ground offensive spearheaded by an extremist Shiite paramilitary group on the Turkmen-populated Tal Afar has raised eyebrows in the Turkish government. A senior official from the government last week told Daily Sabah that Turkey has never condoned such a move and will never turn a blind eye to it.

The high-level official underscored that the offensive should be carried out by the national Iraqi army rather than a recently legalized paramilitary group due to fears in Ankara that the Shiite group may spoil the ethnic and sectarian composition of the town. "Tal Afar's ethnic and sectarian composition should be preserved," the official said to sum up Ankara's views on the issue.

Tal Afar, a relatively large town with a population of 200,000 Turkmens, fell into the hands of Daesh in 2014 after the Iraqi army withdrew from the town. An estimated 60 percent of the Turkmens are Sunnis, while the remaining Turkmens are Shiite. Ethnic cleansing stemming from sectarian divisions is feared once the extremist Shiite paramilitary group takes control of the town.

That being said, the U.S. seems to find comfort in the legalization of the paramilitary group that was mixed into the Iraqi National Army. "The Iraqi Council of Representatives approved the Popular Mobilization Forces law on Nov. 26, 2016, codifying the PMF as a component of the Iraqi Security Forces under the Prime Minister's command. The Coalition acknowledges the contributions of the PMFs to the ongoing efforts to defeat Daesh in Iraq," Colonel Scrocca said.

The Iraqi Parliament voted to grant full legal status to the group on Nov. 26, 2016. The law placed the militias under the command of Iraqi Prime Minister Haidar al-Abadi and gave militiamen salaries and pensions that mirror those of the military and the police.

The same al-Abadi had promised prior to the parliamentary vote that Shiite paramilitary groups, such as Hashd al-Shaabi, would not be allowed to enter Tal Afar, adding that only the "72nd and 92nd brigades would enter the city."

Ankara's concerns in regards to a Tal Afar controlled by Hashd al-Shaabi may have some grounds. The group has had an ill famed past. Iraq's Sunni Arabs and human rights groups have long accused the militiamen of being involved in extrajudicial killings, abuse and the theft or destruction of property in areas from which they drove out Daesh.

Also recently, Iraqi ambassador to Ankara, Hisham Ali Akbar Ibrahim al-Alawi, admitted that some people in the group "might have engaged in illegal actions" during the war in Mosul.

Furthermore, a 2015 Amnesty International (AI) report said: "Shiite militias have been abducting and killing Sunni civilian men in Baghdad and around the country. These militias, often armed and backed by the government of Iraq, continue to operate with varying degrees of cooperation from government forces, ranging from tacit consent to coordinated, or even joint, operations."

It is feared that continuous and uncontrolled support by major powers flowing into Hashd al-Shaabi and other Shiite extremist groups may lead to the emergence of a new al-Qaida in the region.

Bilgay Duman, an expert on Iraqi affairs at the Middle East Strategies Research Center (ORSAM), recently said Hashd al-Shaabi's track record of human rights violations is not good, and the Iraqi government would be responsible for any possible future tragedies in the region.

In spite of reported extrajudicial killings and human rights violations committed by the paramilitary group, the U.S. has praised Hashd al-Shaabi's efforts. "The Coalition acknowledges the contributions of the PMFs to the ongoing efforts to defeat Daesh in Iraq. The PMF are serving in coordination with the government of Iraq's plan and have liberated significant Daesh territory to the west of Mosul, having helped isolate the area as well as Tal Afar so Daesh fighters could not escape," Colonel Scrocca said.

If Ankara's nightmares were to come true in the upcoming months, it remains a question whether the Turkish government will take action. President Recep Tayyip Erdoğan said in late October 2016 that Turkey does not find such an offensive appropriate in any way and that Turkey's response might be different.

"I conveyed this to all authorities loud and clear. Tal Afar is entirely a Turkmen town. Half the town is Shiite and the other half Sunni. We are looking at them holistically as Muslims rather than Shiite or Sunni. However, if Hashd al-Shaabi terrorizes [Tal Afar], our response would certainly be different."