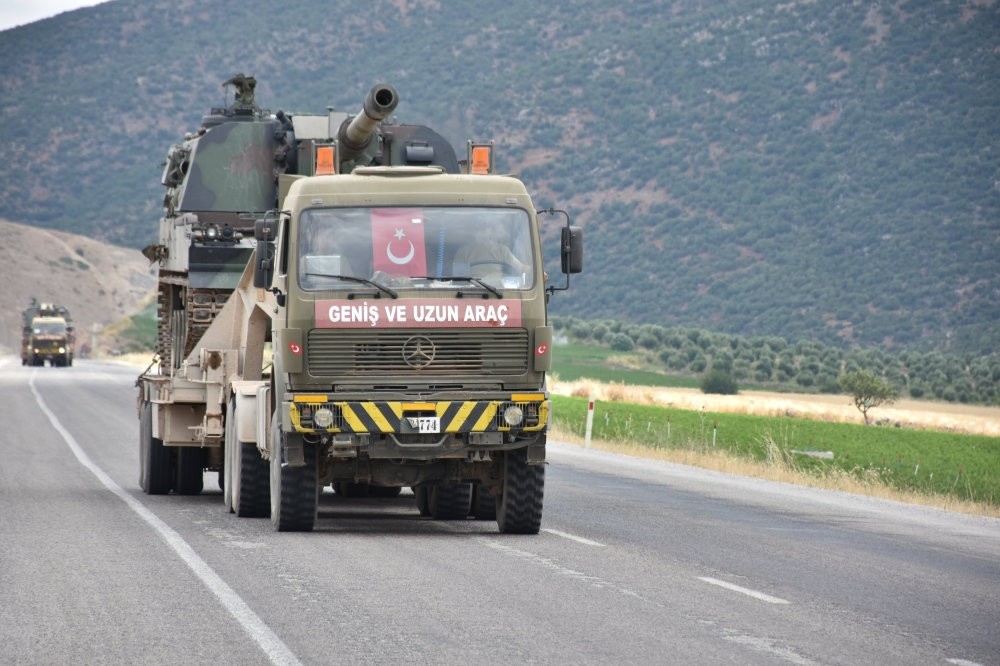 Turkish military vehicles on a road in Afrin. Turkish officials held talks in Tehran in mid-July with Iranian and Russian authorities regarding the Afrin operation.
by Yunus Paksoy Aug 15, 2017 12:00 am

Iranian Chief of Staff Gen. Mohammad Hossein Bagheri arrives in Ankara today to meet Turkish officials amid efforts to bring the two sides to a common understanding to collaborate on the Syrian and Iraqi crises despite some conflicts and differences of opinion

Cooperation between Turkey and Iran on regional issues is ramping up as Iranian Chief of Staff Gen. Mohammad Hossein Bagheri arrives in Ankara today to meet with Turkish officials. High-level diplomatic sources told Daily Sabah that the two sides are more willing than ever to reach deals in Syria and Iraq.

Amid conflicts and differences of opinion in the region, Ankara and Tehran have rarely been drawn to each other as such while diplomatic channels exert efforts to bring the two sides to a common understanding. In this respect, Bagheri will pay a visit to Ankara today that lasts until Friday to meet with high-level Turkish officials and collaborate on the Syrian and Iraqi crises.

Senior diplomatic sources in Ankara told Daily Sabah that such a high-level visit by an Iranian military representative is a milestone in bilateral relations. Stressing that a visit by the Iranian chief of staff would not have taken place if both sides had not showed signs of willingness to cooperate and strike deals in the region, the sources said that firm steps are set to be taken.

The restlessness in Idlib, Syria, and People's Protection Units-held (YPG) Afrin have forced Turkey and Iran to communicate and collaborate more than ever. Also, the common opposition to the Iraqi Kurdistan independence referendum brought the two countries closer.

Afrin has been dominating Ankara's agenda for a long time. Determined to drive the YPG from the strategic town, the Turkish government has tested the waters. At the time, sources told Daily Sabah that Afrin could be handed over to Turkey, but Ankara has to take some concrete steps first in other parts of Syria for the Kremlin and Tehran to act. "If Turkey can achieve to convince the opposition to withdraw from some areas in the south, Iran and Russia may keep silent over the handover of Afrin," they said.

In the meantime, a Turkish delegation of representatives from the National Intelligence Organization (MİT), the Turkish Armed Forces (TSK) and the Foreign Ministry held talks in Tehran in mid-July with Iranian and Russian authorities regarding Afrin, the sources said.

While the diplomacy traffic between Ankara and Tehran has been intense, another meeting at the level of undersecretaries is expected to be held in the Iranian capital in the upcoming weeks.

As for the Iraqi Kurdistan independence referendum set to be held on Sept. 25, Ankara and Tehran share the same opposition. Both claim that independence could add fuel to already dangerously heated flames. "Iran's principal position is to support the territorial integrity of Iraq," Iranian Foreign Ministry spokesman Bahram Ghasemi said. "The Kurdistan region is part of the Iraqi republic and unilateral decisions outside the national and legal framework, especially the Iraqi constitution … can only lead to new problems."

Ankara's response has been no different. "We would like Iraq to continue as a state for all Iraqis. As such, we do not consider it right to create a new problem area in a region that already has many problems. We think that this decision is irresponsible," Prime Minister Binali Yıldırım said in early June.

Iran has soothed Ankara in openly bashing the PKK and its Syrian affiliate YPG. Responding to questions from journalists in Ankara during a fast-breaking iftar event in late June, Iran's ambassador to Ankara, Mohammad Ebrahim Taherian Fard, said that Tehran considers " the PKK, the PYD [Democratic Union Party] and the YPG to be terrorist groups."

He said that Ankara and Tehran must join hands to tackle extremism and terrorism, adding that this "is a necessity rather than a choice."

Fard's statement came as a surprise as Tehran has so far refrained from calling the PYD or the YPG terrorist groups. The two groups collaborate with the Assad regime across Syria. The regime is heavily backed by Iran both on the ground and at the table in the international arena.