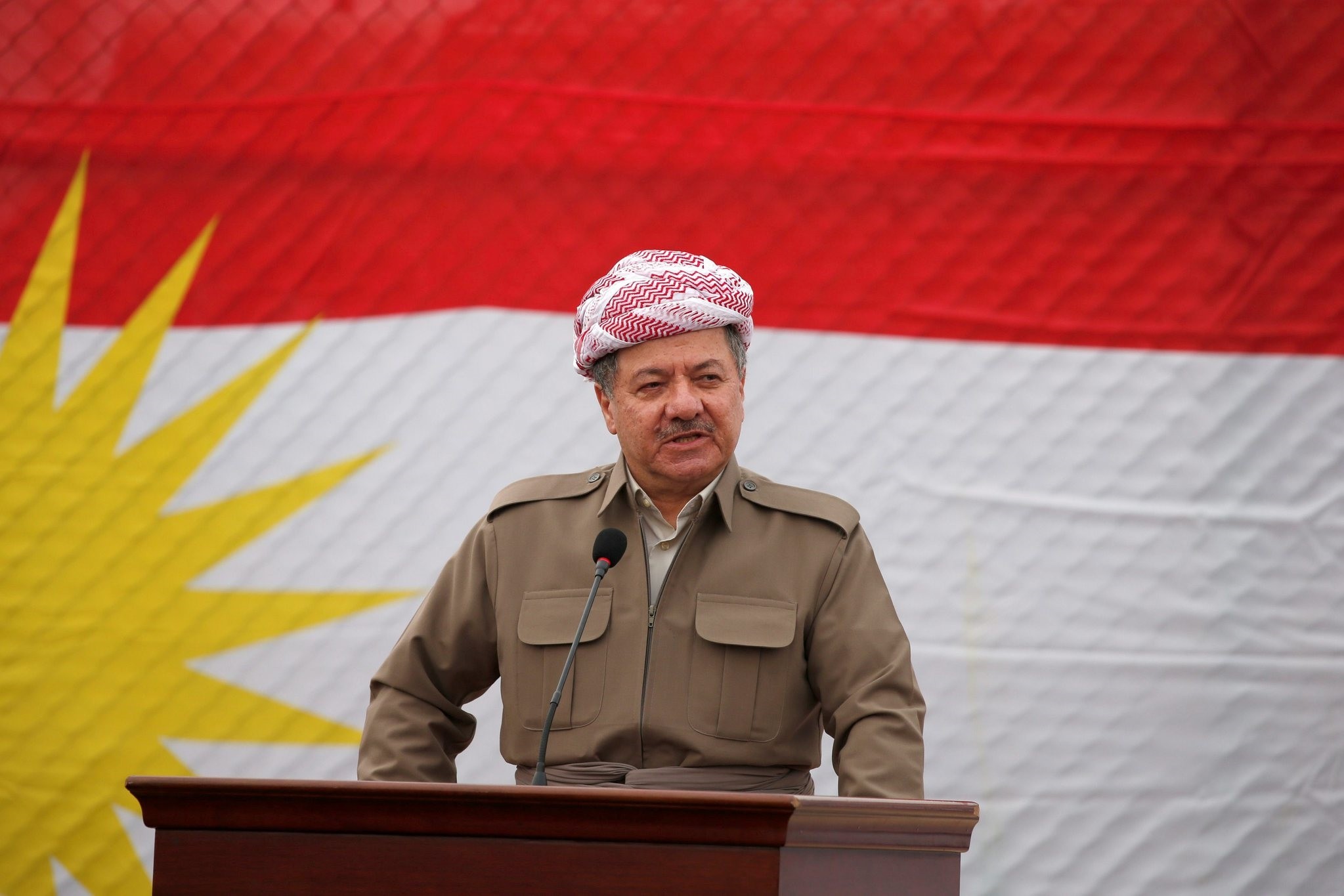 While the Iraqi Kurdistan Regional Government is firm on holding its referendum for independence next month, experts claim that the decision could further trigger regional conflicts

The Iraqi Kurdistan Regional Government's (KRG) planned referendum for independence is less than a month away. While the KRG's insistence to hold the referendum on Sept. 25 continues, as was announced by KRG President Masoud Barzani, there have been concerns over how this will affect the dynamics in Iraq as well as balance in the region as a whole. Meanwhile, analysts argue that the desire for independence may further exacerbate regional instability, urging that the issue should be reconsidered.

According to Yeni Yüzyıl University Rector Yaşar Hacısalihoğlu, who is an academic in the Department of International Relations, "The realities in the region are obvious. There is a desire to create further conflict and tension among the people, which is a danger for the region. There are already two failed states in region: Syria and Iraq. Holding the referendum in such a rushed manner and a fait accompli will also create new crisis," he said, adding that the referendum should be discussed in a way that will not result in the emergence of new conflicts in the region. The KRG's independence has been opposed by Turkey, Iran and the Iraqi central government, while the KRG's Western allies, including Washington and the EU, argue that the timing of the planned vote should be postponed as the focus and priority should be put on the fight against Daesh.

The KRG's insistence to hold the referendum now emerges from the belief that this is the most optimal time for independence. The attitude of "When, if not now," has been asserted by KRG officials, as the instability, ethnic and political divisions in Iraq, as well as Syria, are considered a prime opportunity for the creation of an independent state in northern Iraq. 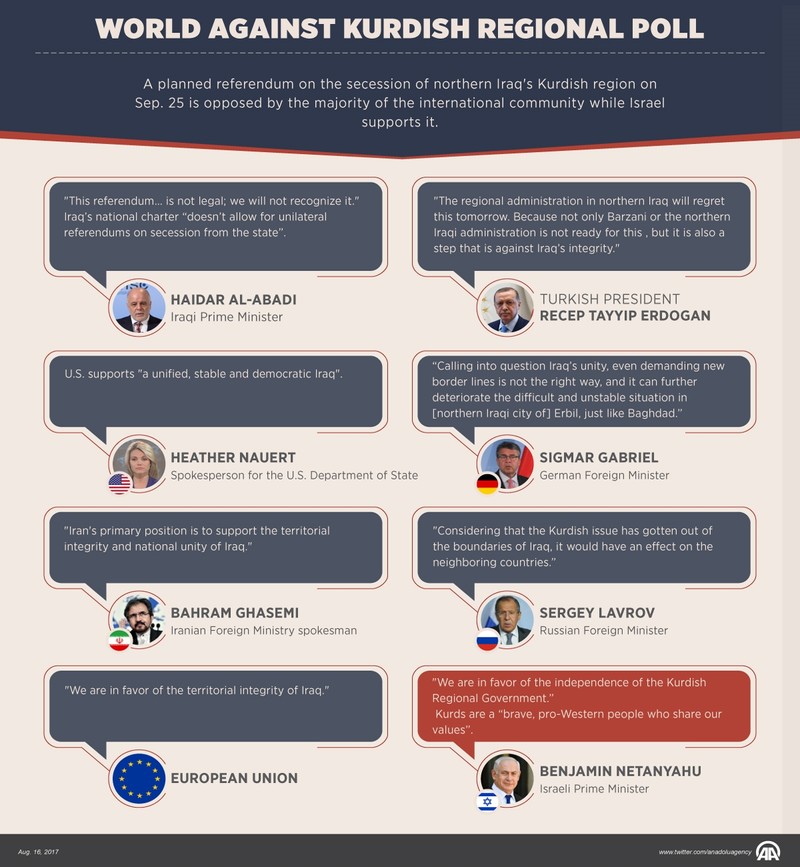 Such aim is strongly opposed by the Iraqi central government; as such a move would threaten the territorial integrity of Iraq as a result. In addition, the sharing of natural resources, including oil as well as water, in Iraq and the control of disputed areas remain major concerns for Baghdad.

Per Article 140 of the Iraqi Constitution, oil-rich Kirkuk is among the disputed areas, a city that is populated by Kurds, Arabs, and Iraqi Turkmens. After the U.S. invasion of Iraq in 2003, the Kurds were given leverage over the city, in a move which has been met with opposition by local Arab and Turkmen populations.

While the administrative statuses of these areas were to be determined through referendums by the year 2007, these referendums have not yet been held due to political turmoil in the country.

Yesterday, the Kirkuk Provincial Council (KPC) voted in favor of joining the planned independence referendum, which was boycotted by Turkmen and Arab deputies and also received criticism from Turkey's foreign ministry.

In a statement released yesterday, the Turkish Foreign Ministry said that while the referendum is a mistake on its own, the KPC's decision to be involved in the upcoming planned referendum "adds a new link to the chain of mistakes," referring to the decision which essentially violates the Iraqi Constitution.

Senior assistant to President Masoud Barzani and head of the Foreign Relations Committee of the ruling Kurdistan Democratic Party, Hemin Hawrami, said recently that Iraq's federal system is no longer sustainable, pushing the KRG to decide on a referendum.

"Of course, they prefer us to stay in Iraq. However, we argue that a federal, inclusive Iraq is now over. The federal system has failed in Iraq," Hawrami said in a recent interview with The New Turkey website.

Ankara and Tehran: 'Iraq's territorial integrity must be kept'

Turkey and Iran have both voiced opposition against the KRG's move for independence, saying Iraq's territorial integrity will be supported as a policy.

Iranian Chief of Staff Gen. Mohammad Hossein Bagheri said in a recent visit to Ankara, following a meeting with President Recep Tayyip Erdoğan and Chief of General Staff Gen. Hulusi Akar, that the independence referendum would trigger conflict and negative consequences for the entire region.

"Both sides stressed that if the referendum is held, it will be the basis for the start of a series of tensions and conflicts inside Iraq, the consequences of which will affect neighboring countries," Bagheri said.

"Holding the referendum will not only get Iraq involved but also Iran and Turkey. So, for this reason the authorities of the two countries are emphasizing that it is not possible and should not be done," the Iranian military chief said.

Another concern for Tehran would also be the rising influence of the U.S. via its establishments in the proposed, independent KRG.

Turkey has said from the early days following the announcement of the decision that the KRG's decision is a "grave mistake." President Recep Tayyip Erdoğan and Binali Yıldırım have voiced concerns over the decision, criticizing Irbil for not consulting with Ankara as they have done in other matters.

Daily Sabah columnist İlnur Çevik, who is also a senior advisor to President Erdoğan, said in a recent article that Turkey has communicated its position clearly and does not want this referendum to occur.

"Turkey says it does not want such a referendum and has served notice to all the interested parties while others, like the Americans, regard the referendum as untimely and a bad idea for the time being, while leaving the door open for any future referendums on the issue," Çevik said, adding that while Turkey would not prefer to impose any economic blockade on the KRG, it has to "spell out to the KRG and the people living in this area what they will miss 'the day after.'"

Turkey is also concerned that if a new conflict were to emerge in the region it would place a new humanitarian burden on Turkey's shoulders in a country already pressured by the nearly three million Syrians it hosts in the country.

A major concern for both Turkey and Iran is that KRG independence might further trigger the desire of the PKK terrorist organization and its affiliates in both countries to increase conflicts in their country and demand autonomy. In a way, Ankara and Tehran consider such a scenario as an existential threat.

The Kurdistan Free Life Party (PJAK), which is associated with the Kurdish Communities' Union (KCK), the umbrella organization for the armed PKK, is the Iranian branch of the terrorist organization. In Syria, the group goes by the Democratic Union Party (PYD) and its armed wing the People's Protection Units (YPG).

Washington: 'Referendum date must be postponed'

The U.S. has not opposed the referendum but has called for dialogue between Irbil and Baghdad, pushing for the postponement of the referendum to a later date. Washington has said that the KRG referendum would be "a distraction from urgent priorities," the fight against Daesh.

"The U.S.'s attitude towards the KRG referendum shows that Washington deals with different Kurdish actors within the specific dynamics of the country's they are in. While the PKK is seen as a terror group in Turkey, the PYD in Syria is supported. Similarly, its policy towards the KRG is taken into consideration within the dynamics of Iraq. For this reason, Washington does not openly accept or oppose the referendum but it asks the KRG to delay it at the moment," journalist Özcan Tikit from Haber Turk daily explained.

While Russia has not been strongly involved in the KRG's referendum discussions, Israel has said that it supports Barzani's aims to separate from Iraq.

Israeli Prime Minister Benjamin Netanyahu expressed a "positive attitude" towards an independent state in northern Iraq, according to a report by the Jerusalem Post in early August.

"It is noteworthy that Israel supports this referendum. In a way, Israel is attempting to draw attention away from the conflict with Palestine amid aims to create new tensions that will surround the Kurds, Turkmens and Arabs," Yeni Yuzyil University academic Yaşar Hacısalihoğlu also said.

"People should be able to decide for their own future. The stance against the referendum is not a stance against the Kurds. However, in a fragile region such as ours, the decisions should not open doors to new exploitative measures and orders that would open up the region to exploitation from outside powers. This is what Barzani should consider very carefully," Hacısalihoğlu added.