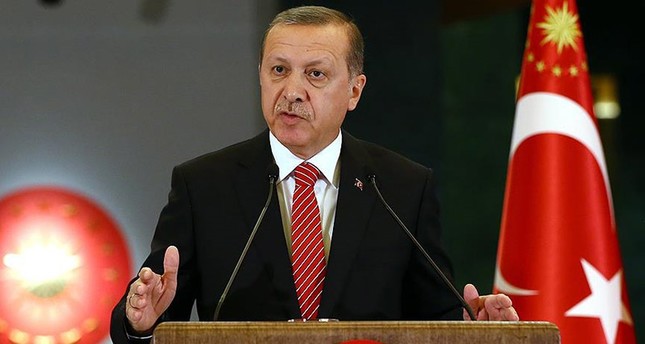 President Recep Tayyip Erdoğan underlined Wednesday that Turkey would not leave the oppressed Rohingya Muslims alone in the ongoing crisis in Myanmar.

Speaking at the Victory Day evening reception at the Beştepe Presidential Palace in Ankara, Erdoğan reiterated that Turkey was ready to provide more humanitarian aid to those in Rakhine and called on the international community to do the same.

In his speech, Erdoğan also stressed the importance of the fight against terrorism, hinting that any political and military option would be considered regarding the developments in the region.

"Those who want to corner Turkey through terror organizations will be left alone with these ticking bombs after a while," the president warned.

He said that Turkey owed the success in the fight against terror and cross-border operations to the steps taken in the defense industry over the last 15 years.

He asserted that Turkey was not in a state of regression in any way, saying that the 'veiled' embargoes, recent problems with its allies or FETÖ's coup attempt had not affected the country's current or future plans, projects and operations.

Erdoğan also said that the weapons supplied by Turkey's allies ended up in the hands of Daesh terrorists, adding that the very same weapons would be used against them "when the time comes, just like a boomerang."

Share on Facebook Share on Twitter
Previous in Diplomacy Experts say Kirkuk province's decision to participate in the planned... Next in Diplomacy The United States is retaliating against Russia by forcing closure...
DAILY SABAH RECOMMENDS