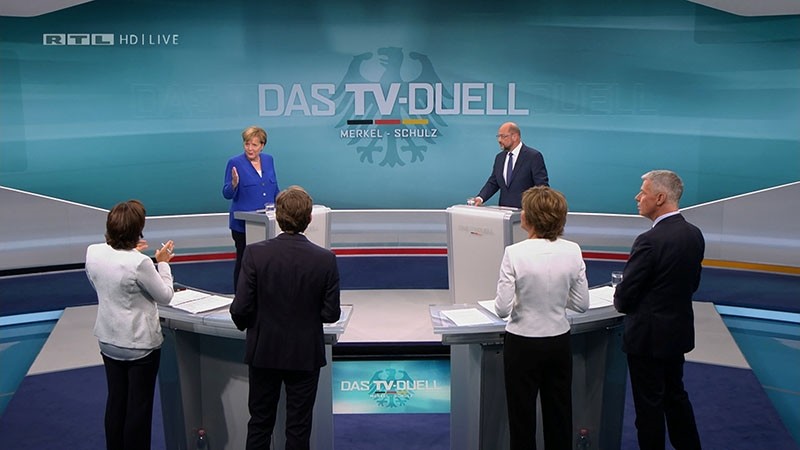 A screen that shows the TV debate between German Chancellor Angela Merkel of CDU and her challenger SPD candidate for chancellor Martin Schulz in Berlin, Germany, Sept. 3, 2017. (Mediengruppe RTL Deutschland (MG RTL D) via Reuters)
by Daily Sabah Sep 04, 2017 12:00 am

Despite no major differences between their arguments ahead of the German elections, the underlying debate between German political leaders has been its relations with Turkey. All of Germany's political parties, especially the current coalition partners to Angela Merkel's Christian Democrats Union (CDU) and the Social Democrats (SPD) led by Martin Schulz and Foreign Minister Sigmar Gabriel, promise to increase the pressure on Turkey and put an end to Turkey's EU accession talks as part of their election campaigns. On Sunday, Ankara criticized the current state of German politics for focusing on anti-Turkey sentiments, which he said indicates a growing "lack of vision" in Europe.

In a series of messages posted on his official Twitter account yesterday, presidential spokesperson İbrahim Kalın said that the fact that the televised debate broadcast on Sunday between Chancellor Merkel and her opponent, center-left candidate Martin Schulz, was focused on Turkey and President Recep Tayyip Erdoğan was "no coincidence."

"Attacking Turkey and Erdoğan with total disregard for the fundamental and urgent needs of Germany and Europe is a reflection of narrowing vision in Europe," Kalın said, adding that anti-Turkey sentiments and the act of ignoring basic local issues by putting the blame on the "other" has become a means of relief for European politicians.

During the televised debate, Merkel said that she would ask the EU to call off membership talks with Turkey, amid escalating tensions between Berlin and Ankara.

"I don't see them ever joining [the EU] and I had never believed that it would happen," she said during a televised debate with Martin Schulz, her Social Democratic rival ahead of upcoming elections later this month.

Turkey's Minister of EU Affairs Ömer Çelik also bashed Merkel and Schulz for their remarks on his Twitter account yesterday, saying that they are in a race to speak about Turkey. "It seems that Germany has no issue other than Turkey in regards to making domestic politics matter while the elections are approaching," Çelik said, adding that having good relations between Turkey and Germany would benefit everyone. "Thus," he tweeted, "German politicians should get rid of this careless rhetoric, which is a serious problem for Germany."

Criticizing Schulz for speaking against Turkey due to the fear of failure while acting in favor of the country behind closed doors, Çelik said that in order to not be left behind, Merkel also jumped on the same bandwagon.

According to Enes Bayraklı, who is a foreign affairs specialist at the Foundation for Political, Economic and Social Research (SETA), Turkey has been deemed "the other" by Germany for a while and now, they can't rid of this trap that they have created. Thus, he said, they continue to ostracize Turkey.

Speaking in Slovenia on Sunday, Foreign Minister Mevlüt Çavuşoğlu attributed the recent statements of German leaders to the upcoming election in the country.

"Germany should not have come to this point. I hoped they would return from the road that they had gotten on," Çavuşoğlu said, adding that having bad relations is harmful for both sides.

The Turkish Foreign Ministry also released a statement yesterday regarding the use of rhetoric against Turkey as an election material both in Germany and Austria, saying that they follow the process with compunction while adding that maintaining such rhetoric leading up to an election is harmful for Europe as a whole.

After saying that Ankara "should not become a member" of the EU during the debate, Chancellor Merkel's spokesman said yesterday that Turkey is not ready to join the EU. "The chancellor's words speak for themselves," Merkel's spokesman Steffen Seibert said during a regular government news conference in Berlin.

"At the moment, Turkey is not at all in a position to join the EU. In fact, the negotiations are dormant at the moment," he said, adding that EU leaders would resume talks over the issue when they meet in October.

The EU executive made a statement yesterday in the wake of Merkel's remarks, saying that the actions of the Turkish authorities are making it "impossible" for the country to join the European Union. Quoting European Commission President Jean-Claude Juncker from last week, before Merkel's election campaign comment, the Commission's chief spokesman told a regular news briefing: "Turkey is taking giant strides away from Europe and that is making it impossible for Turkey to join the EU."

He stressed, however, that any decision on whether to formally halt the long-stalled membership process would be up to the 28 member states of the bloc, not the Brussels executive.

"Speaking of cutting the negotiations does not have any sanction power over Turkey since they already weren't moving ahead. Besides, since they have to take the vote of every member state, I do not believe that they would be able to do that. They cannot dare to do such a thing since they always try to put Turkey at some distance," Bayraklı added, regarding Merkel's statements on putting an end to Turkey's negotiation process with the EU.

Meanwhile, Foreign Minister Mevlüt Çavuşoğlu Saturday also slammed the reactions of German officials on the latest arrests of a couple with dual Turkish-German citizen over suspected Gülenist Terror Group (FETÖ) membership, one of whom was released yesterday, a spokesman for the German Foreign Ministry confirmed.

"When we first arrest a FETÖ member, Germany causes a stir first. What is it to you? They say: 'Why do you arrest our [German] citizens?' They are Turkish citizens at the same time. If they are FETÖ members, if they were involved in the coup attempt or supported it, why do you take care of them? Why does it bother you so much?" Çavuşoğlu said.

On Sunday, German Foreign Minister Gabriel said that he wants to urge other EU countries to increase the pressure on Ankara following the latest detentions.

Berlin acknowledged the detentions as arrests of two more German citizens in Turkey, without referring to their FETÖ ties. A total of 12 German nationals, including four with dual German-Turkish citizenship, are in custody as part of ongoing terror probes. Germany portrays these incidents as political imprisonment and demands their immediate release, although Turkish officials repeatedly stated that they will be subject to the same judicial procedures, which are currently continuing.

The Turkish presidential spokesman further warned that societies which try to identify themselves through alienation of the "other" can never find their own identities because such stance only harms themselves.

"Submission of mainstream German politics to populism and 'otherization' or alienation will only fuel discrimination and racism," Kalın said, while he criticized Germany for harboring PKK and FETÖ terrorists.

Relations between Turkey and Germany, the latter of which is home to 3 million ethnic Turks, have become badly strained, particularly since the failed coup attempt one year ago against Turkey's democratically elected government by FETÖ. Turkey accuses Germany of harboring high-ranking FETÖ figures and soldiers linked to the coup attempt, in addition to allowing the activities of the PKK and the Revolutionary People's Liberation Party-front (DHKP-C) terrorist groups to continue in Germany.

According to a report in Germany's Spiegel magazine on Saturday, Germany has rejected a formal request from Turkey to freeze assets of members of FETÖ, which orchestrated last year's failed coup.

Without naming its sources, the magazine said the Turkish government had asked the German Foreign Ministry in Berlin at the end of April to freeze the assets of FETÖ and its members in Germany. It attached a list which included 80 names, it said. The German government officially rejected the request at the end of June, telling Ankara there were "no legal grounds" for Germany's financial watchdog BaFin to crack down on the terror group and its supporters, the report said. The Foreign Ministry in Berlin declined to comment.

The report also suggested that the number of Turkish extradition requests sent to Germany had increased to 53 since the beginning of the year, already exceeding the total in the entire year of 2016.