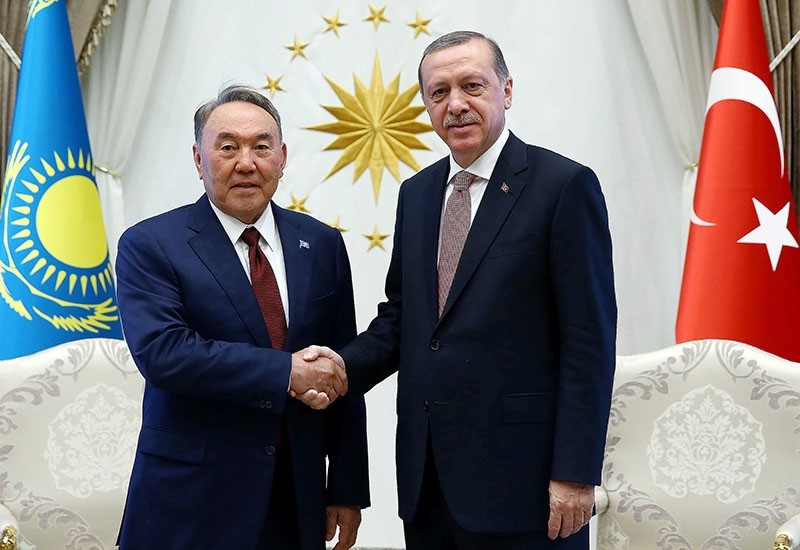 President Recep Tayyip Erdoğan plans to visit Kazakhstan from Sept. 8-10 where he will hold face-to-face meetings with his Kazakh counterpart Nursultan Nazarbayev to discuss the humanitarian tragedy unfolding in Myanmar, the common fight against the Gülenist Terror Group (FETÖ) and bilateral trade, all of which will top the agenda.

President Erdoğan's visit to Kazakhstan comes on the heels of the human tragedy that has been intensifying in Myanmar against Rohingya Muslims. The Turkish president is expected to touch on the issue during his meeting with Kazakh President Nazarbayev in efforts to decide what concrete steps could be taken to help find a solution to the crisis.

The fight against FETÖ is also expected to be on the two leaders' agenda during the meetings. While the Turkish government wages an extensive war against the terrorist group - especially after it staged a coup attempt in the country in July 2016 - the struggle is being further expanded around the globe.

Recently, Deputy Rector Mehmet Kutalmış of Khoja Akhmet Yassawi International Kazakh-Turkish University, a school founded in an intergovernmental agreement between Turkey and Kazakhstan in 1991, told Daily Sabah that the cult experienced a sharp loss in its grip of power in Kazakhstan in the recent period, after their educational establishments were closed in the country. Kutalmış stressed that most Gülenists in Kazakhstan have left the country, moving to other Central Asian countries where the cult still has members in the bureaucracy.

Last year, the Kazakh government decided to take over 27 FETÖ-affiliated schools and appointed Deputy Prime Minister Imangali Tasmagambetov as chairman of the Board of Trustees for the schools.

Erdoğan's visit to Kazakhstan aims at improving trade ties, as well. The bilateral trade volume between Turkey and Kazakhstan stood at around $2 billion as of 2015. The Turkish Foreign Ministry states that the aim is to increase bilateral trade volume to $10 billion as soon as possible. Under these auspices, Turkish businessmen in Kazakhstan are mainly focused on the food sector, the pharmaceutical and chemical industry, construction, hotel management and manufacturing.

According to data compiled by the Turkish Foreign Ministry, Turkey is the 17th largest investor in Kazakhstan, while it ranks fourth in the non-energy sectors. Turkish firms operating in Kazakhstan currently employ over 15,000 people.

A week later after his visit to Kazakhstan, President Erdoğan will attend the U.N. General Assembly in New York City in the U.S. from Sept. 19 to Sept. 25.

Kazakhstan also plays a crucial role in Turkey's efforts in the region, as the former has hosted peace talks in Astana between the Syrian opposition and the Assad regime. Turkey, Russia and Iran also play active roles in the Astana process.

The two countries established a High Level Strategic Cooperation Council in May 2012 when then-Prime Minister Recep Tayyip Erdoğan paid a visit to Kazakhstan. The first meeting of the council was held from October 11-12, 2012 during President Nazarbayev's visit to Ankara. The second meeting was held from April 15-17, 2015 during President Erdoğan's most recent visit to Kazakhstan.