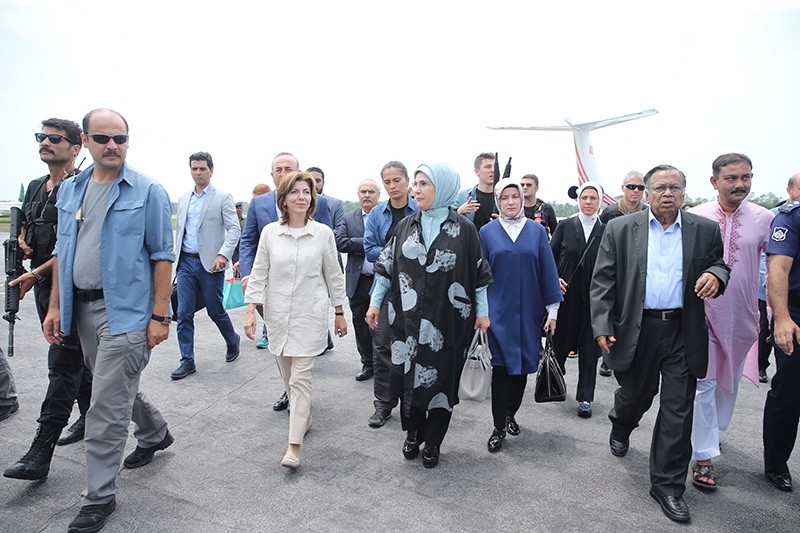 The first lady told reporters that Turkey will do everything possible to help the Rohingya, and that her husband, President Recep Tayyip Erdoğan, would take up the issue at this month's U.N. General Assembly meeting.

"It is not possible to be not touched by this situation as a human being. May Allah help them. I hope that the whole world will take care of this issue and take is seriously both politically to find a solution and in terms of providing aid to these people," the first lady said, adding that it is unbelievable to see that such a disaster can occur in this age while the whole world is watching.

Calling on the international community, Emine Erdoğan highlighted that everyone has a responsibility over the troubles that the Rohingya suffer.

"We all have children. We cannot overlook what is happening here just because they are not our children. We are all responsible and that is why we are here," she said, while expressing her wish to see everyone do whatever they can to help.

Mrs. Erdoğan also visited the Kutupalong refugee camp in Cox's Bazar district and distributed aid while getting information from the camp authorities.

Foreign Minister Mevlüt Çavuşoğlu has also arrived in Bangladesh to meet with officials and NGO heads and visit the refugee camp in Cox's Bazar.

Foreign Minister Çavuşoğlu and the first lady visited the refugee camp housing more than 50,000 people and talked with residents, including a young person with a bullet injury, about ongoing violence in Myanmar's Rakhine state.

Bangladeshi officials also briefed them on how they are attempting to provide shelter, food and health care to the huge numbers of refugees.

Turkey is expected to deliver humanitarian aid to some 100,000 Rohingya families.

Meanwhile, the United Nations said that some 146,000 people have fled Myanmar into Bangladesh since violence erupted there on Aug. 25.

U.N. spokesman Stephane Dujarric said Wednesday from the U.N. that the World Food Program is appealing for $11.3 million to support the influx of people and those already living in camps. The U.N. agency has provided food to tens of thousands of people, with Dujarric describing women and children arriving there as "hungry and malnourished."

Rohingya Muslims have been fleeing since insurgent attacks against border police and other government troops on Aug. 25 sparked retaliation by Myanmar soldiers. The army and police have been accused of firing indiscriminately, but the government says its forces are making every effort to avoid harming innocent civilians.

Meanwhile, journalists saw new fires burning yesterday in a Myanmar village that had been abandoned by Rohingya Muslims, and pages ripped from Islamic texts that were left on the ground. That intensifies doubts about government claims that members of the persecuted minority have been destroying their own homes.

About two dozen journalists saw the fires in Gawdu Zara village in northern Rakhine state on a government-controlled trip. About 164,000 Rohingya from the area have fled across the border into Bangladesh in less than two weeks since Aug. 25, when Rohingya insurgents attacked police outposts in Gawdu Zara and several other villages, the U.N. refugee agency said Thursday.

On the Myanmar side of the border, reporters saw no Rohingya in any of the five destroyed villages they were allowed to tour Thursday, making it unlikely they could have been responsible for the new fires.

An ethnic Rakhine villager who emerged from the smoke said police and Rakhine Buddhists had started the fires. The villager ran off before he could be asked anything else.

No police were seen in the village beyond those who were accompanying the journalists. But about 10 Rakhine men with machetes were seen there. They looked nervous; the only one who spoke said he had just arrived and didn't know how the fires had started.

Among the buildings on fire was a madrassa, an Islamic school. Copies of books with texts from the Quran, Islam's holy book, were torn up and thrown outside. A nearby mosque was not burned.

Another village the journalists visited, Ah Lel Than Kyaw, was blackened, obliterated and deserted. Cattle and dogs wandered through the still-smoldering remains.

"From our side, there was one immigration officer dead, and we found 17 dead bodies from the enemy side," he said.

He said the fires were started on Aug. 25, though some continued to burn Thursday. Virtually all buildings in the village seen by journalists had been burned, along with cars, motorbikes and bicycles that fleeing villagers left behind. A mosque was also damaged.

The U.N. documented mass gang-rape, killings, including infants and young children, brutal beatings and disappearances. Rohingya representatives have said approximately 400 people have been slain in the crackdown.