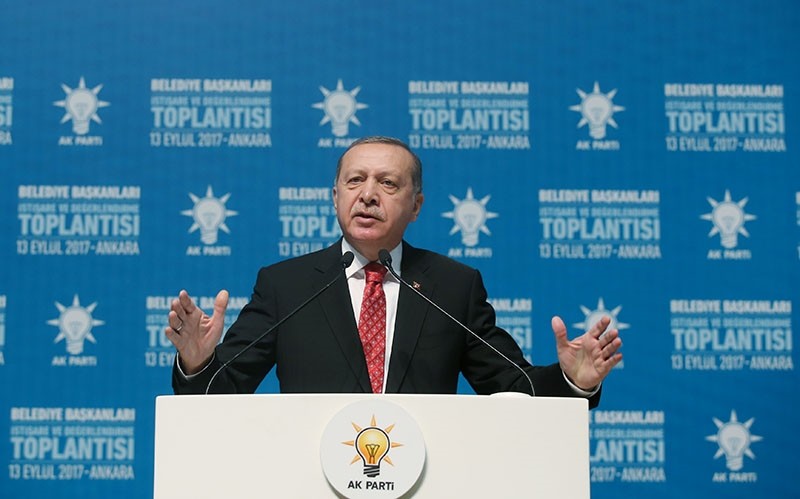 "They went crazy because we made the S-400 agreement. What were we supposed to do, wait for you? We are taking and will take all our measures on the security front," Erdoğan said during a meeting with mayors from the ruling Justice and Development Party (AK Party) in Ankara.

Erdoğan said in July that the deal had been signed, although the deal appears to have been drawn out since then, due to issues over financing. He said Sunday that a down payment has already been transferred to Moscow and he and Russian President Vladimir Putin were determined that the agreement should proceed.

The total value of the deal is believed to be around $2.5 billion.

Vladimir Kojin, an aide to Russian President Vladimir Putin, confirmed on Tuesday that a contract had been signed.

"I can merely guarantee that all of the decisions made under this contract strictly agree with our strategic interests," he told the TASS news agency.

Western governments have expressed concern over the deal - which Erdoğan said in July had been signed - as it cannot be integrated into the NATO system.

Turkey said in April that NATO ally nations had not presented a "financially effective" offer on alternative missile defense systems.

The decision to procure the Russian system comes as Turkey finds itself frequently at odds with NATO allies, particularly the United States and Germany. Ankara has been angered by U.S. support for the PKK's Syrian offshoot YPG in the battle against Daesh in Syria.

The U.S. Pentagon said it had expressed concerns to Turkey about the deal.

"We have relayed our concerns to Turkish officials regarding the potential purchase of the S-400. A NATO interoperable missile defense system remains the best option to defend Turkey from the full range of threats in its region," spokesman Johnny Michael said in a statement.

In 2013, Turkey selected China Precision Machinery Import-Export Corporation for a long-range air defense system but later scrapped the deal under pressure from NATO.