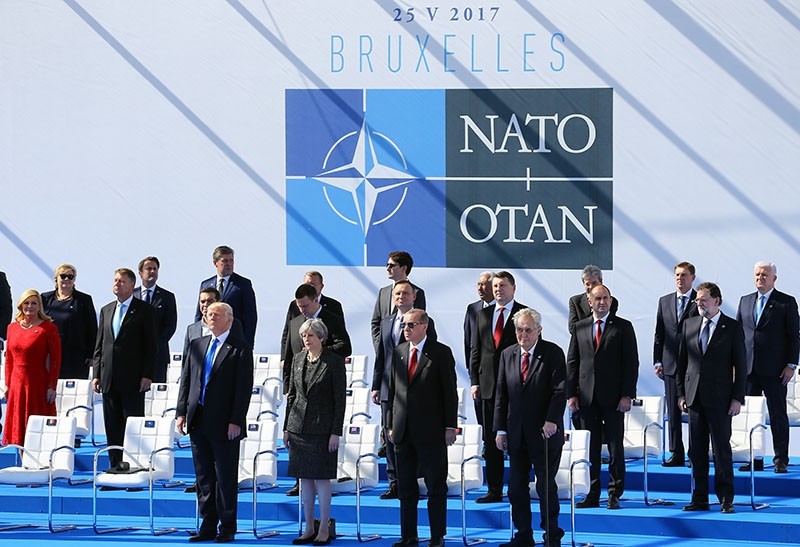 Leaders of NATO member states pose for a photo during the opening ceremony of the alliance's new headquarters in Brussels, Belgium, May 25, 2017.
by Daily Sabah with Agencies Sep 14, 2017 12:00 am

NATO said Thursday the members of the bloc make their own decisions concerning which military equipment to purchase, referring to Turkey's recent move to buy S-400 defense systems from Russia.

Speaking to Anadolu Agency (AA), a NATO official said aligning purchased military systems with NATO equipment is of utmost importance: "NATO countries make their own choices when purchasing military systems. However, the coordination between allies about the systems is of key importance in the context of carrying out NATO's missions and operations. Not a single NATO member is using S-400s, and the bloc has yet to be informed regarding Turkey's purchase of the system," he said.

On Wednesday, France made similar comments, saying Turkey's decision to buy a missile defense system from Russia was not cause for comment by NATO allies.

"The purchase of military equipment by Turkey is a sovereign choice which does not need to be commented (upon) by members of the Atlantic alliance," Foreign ministry spokeswoman Agnes Romatet-Espagne said in response to a question on whether this was a blow to the alliance.

The French comments come a day before the country's foreign minister begins a two-day visit to Turkey, where he will discuss regional issues, promoting support for a new peace initiative on Syria.

Germany, on the other hand, said the agreement is not a new issue for them and "Germany's position regarding the agreement is known by Turkey." "We were aware of the talks and preliminary agreements between Turkey and Russia on the S-400 deliveries," German Foreign Ministry's Martin Schaefer said.

"They went crazy because we made the S-400 agreement. What were we supposed to do, wait for you? We are taking and will take all our measures on the security front," Erdoğan said during a meeting with mayors from the ruling Justice and Development Party (AK Party) in Ankara.

Turkey has agreed to pay Russia $2.5 billion for the S-400 systems, a Turkish official said on July 13.

Turkey said in April that NATO ally nations had not presented a "financially effective" offer on alternative missile defense systems.

The decision to procure the Russian system comes as Turkey finds itself frequently at odds with NATO allies, particularly the United States and Germany. Ankara has been angered by U.S. support for the PKK's Syrian offshoot YPG in the battle against Daesh in Syria.

The U.S. Pentagon said it had expressed concerns to Turkey about the deal.

"We have relayed our concerns to Turkish officials regarding the potential purchase of the S-400. A NATO interoperable missile defense system remains the best option to defend Turkey from the full range of threats in its region," spokesman Johnny Michael said in a statement.

In 2013, Turkey selected China Precision Machinery Import-Export Corporation for a long-range air defense system but later scrapped the deal under pressure from NATO.

Introduced in 2007, the S-400 is Russia's most advanced long-range anti-aircraft missile system and can carry three types of missiles capable of destroying targets including ballistic and cruise missiles.

Last year, both China and India signed an intergovernmental agreement for the procurement of four regiments of Russian-made S-400s and delivery of the new air defense systems is expected to begin in 2020.

The defense system is able to carry missiles, which has the capability to destroy ground and air targets, including ballistic and cruise missiles.