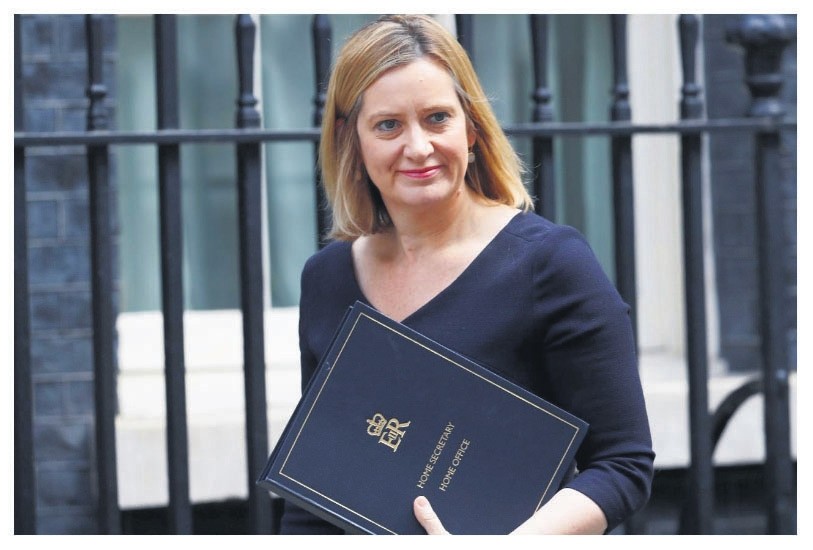 Home Secretary Rudd said that ties between Ankara and London have always been important, but they are even more vital today.
by Daily Sabah Sep 14, 2017 12:00 am

In an interview with Daily Sabah, United Kingdom Home Secretary Amber Rudd highlighted the significance of bilateral ties between the U.K. and Turkey, saying that strong relations help both countries to be safer and more prosperous.

Rudd also underscored that both countries' cooperation in security goes beyond counterterrorism, as they also partner against organized crime and illegal migration. Commenting on the July 15 coup attempt by the Gülenist Terror Group (FETÖ), she added that any attempts to take over the government through non-democratic means is not acceptable for the U.K.

How can we further improve the existing cooperation between UK and Turkey in the fight against terrorism and security?

Our relationship with Turkey has always been important, but it is arguably even more vital today. Turkey sits on the frontline of some of the most difficult and serious challenges we both face. Our partnership helps keep both our countries safer and more prosperous. That is why the prime minister's visit in January established a strategic security partnership and a program of shared collaboration and information exchange. I look forward to discussing how we can continue to build on this when I meet with the interior minister.

Our security cooperation goes beyond terrorism, and we enjoy a close working relationship on a broader range of issues, including on organized crime. For example Turkey provides significant resources on combating illegal migration from Turkey into the EU, including by tackling organized immigration crime, apprehending drug smuggling rings and tackling issues such as exploitation of children.

How do you evaluate Turkey's fight against terror organizations PKK and Daesh? Do you think it is fair and consistent to support one terrorist group (the PKK and its Syria extension PYD) to combat another terrorist organization (Daesh)?

First and foremost Turkey does a huge amount to disrupt the threat posed to both our countries by terrorists, including foreign fighters leaving Syria. Turkey also makes an invaluable contribution to the international campaign against Daesh as a member of the Global Coalition, and we welcome that support. We absolutely condemn the PKK attacks, as we condemn all terrorism. Our thoughts are with the victims of these attacks, as with all the horrific attacks we have witnessed recently.

The UK was one of the countries that extended support to Turkey after the coup attempt. Your attitude on this issue is very clear when compared to other European countries. Why is that?

We're clear that any attempt to seize power through non-democratic means and violence is unacceptable. It is now important that Turkey ensures that the long term response to the challenges it faces, including the on-going terrorist challenge, is lawful, measured and democratic and in line with Turkey's international human rights obligations.

How would you react if a terror organization killed 250 British citizens and attacked the UK Parliament? What would you like to say about the FETO terrorist fugitives in the UK that have allegedly taken part in the coup attempt?

We recognize how seriously the Turkish government takes the Gülen movement. Where there is evidence of criminal wrongdoing by an individual in the UK or through the UK, we will take action.

Turkey opened its doors to 3.5 million Syrian civilians, and to date has spent $30 billion. When taken into consideration the role of Turkey in blocking the flow of asylum seekers to European countries, do you believe that the European countries are doing their part, and keeping their promises?

I recognize the huge contribution Turkey has made to refugees in the region, providing protection to the most vulnerable. Turkey is providing access to education, health and work opportunities to thousands of Syrian children and their families.

The UK for its part has contributed 328 million euros – in addition to our contribution via the EU budget – to the Facility for Refugees in Turkey to support Turkey in dealing with this enormous challenge. We have also worked with the administration to reinforce Turkey's asylum system.

Joint working between Europe and Turkey has successfully reduced the number of deaths at sea and disrupted the business model of smugglers and traffickers in the region. It is important that the EU-Turkey Statement is delivered on both sides to ensure its benefits are fully realized.

You have EU experience; what would you like to say about the EU making Turkey wait at its door for long years? And do you believe that EU's approach to Turkey contradicts its founding principles?

Do you believe that the rhetoric of the politicians and ruling party leaders have an impact on the rise of islamaphobia in Europe? What are your recommendations in the fight against Islamaphobia (which is an issue often raised by President Erdoğan)?

I have been clear that islamophobia – and indeed racism of any kind – has no place in society. Hate crime, directed against any community, race or religion, has absolutely no place in our society, and the scale of hate crime remains a serious concern.

Europe has come a long way in recent years. But there remain worrying examples of the kinds of attitudes that should be consigned to the history books. As a government, we are committed to working with everyone who is standing up against bigotry and intolerance in their communities; we're supporting the public sector and civil society to confront those who spread damaging views that run contrary to our shared values; and we're supporting efforts to improve community cohesion.

What is the reason for more Brits visiting Turkey this year compared to last year? Do you think there are any security concerns for Brits holidaying in Turkey?

It is good news that more Brits are visiting compared with last year. Turkey is an incredible country with so much to offer a visitor. It is no surprise that British nationals made over 1.7 million visits to Turkey in 2016. As the country returns to normality, I hope to see this increase.