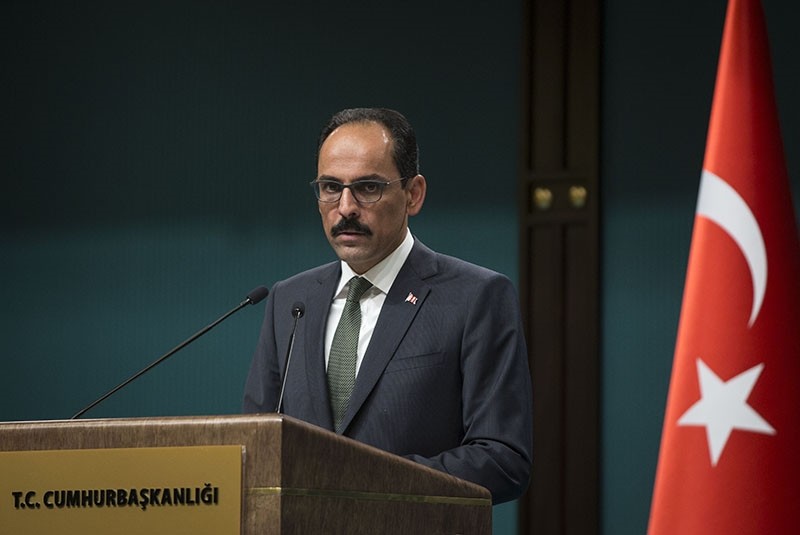 Presidential Spokesperson İbrahim Kalın said Thursday that the brawl in front of the Turkish embassy in Washington, D.C., was only an outcome of U.S. police's security gap and that Turkish guards did their job when those security forces failed.

Speaking at a press conference in Beştepe Presidential Complex in Ankara, Kalın Kalın said that U.S. President Donald Trump and Erdoğan will meet during the U.N. General Assembly meeting in New York, and the two parties are currently formalizing the date and time.

He then brought up the issue to the brawl between President Recep Tayyip Erdoğan's security detail and PKK sympathizers in front of the Turkish embassy in Washington, D.C, on May 16 during his previous visit. The incident was met with a harsh reaction from American politicians and prosecutors, who issued indictments against 19 people, including 15 of Erdoğan's bodyguards, claiming they attacked peaceful protesters.

Kalın said that allowing protesters to get so close to President Erdoğan near the White House was an unacceptable security gap by U.S. security, adding that Turkey would never allow such a thing during a foreign leader's visit.

"The Washington Police Department and those who launched this lawsuit should first answer for that," Kalın said.

"Lawsuits were launched for bodyguards who weren't even there," he said, noting that Turkey did not accept one of its citizens or guards being unfairly charged as in this case.

While elaborating on the recent developments in Syria and the ongoing Astana process to establish de-escalation zones, Kalın also criticized the U.S. policy in the war-torn country, which has become the greatest problem between the two NATO allies over the U.S. support to PKK terrorist group's Syrian offshoot the Democratic Union Party (PYD) and its armed wing People's Protection Forces (YPG).

"Due to U.S. support, everyone remains silent on human rights violations against Arabs, Turkmens or Kurds in PYD-held areas," Kalın said, criticizing the stance of Western media outlets and human rights groups for their auto-censorship.

Kalın said Turkey will discuss the Qatari crisis with relevant countries during the U.N. General Assembly.