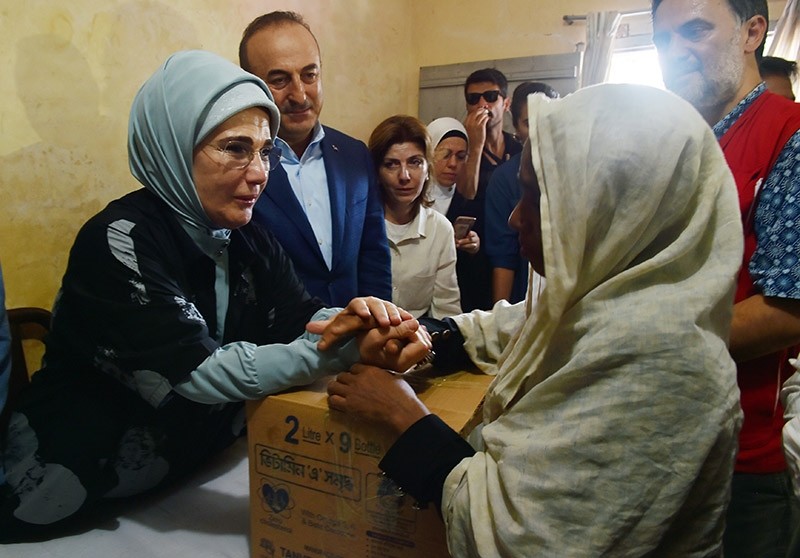 Upon her visit to Bangladesh, where hundreds of thousands of Rohingya Muslims have fled to escape the violence in Myanmar's Rakhine State, Turkish First Lady Emine Erdoğan penned a letter to the wives of world leaders, asking for their cooperation to mobilize the international community.

Erdoğan, accompanied by Turkish politicians and heads of aid agencies, visited the Kutupalong refugee camp in Cox's Bazar district in southern Bangladesh on Sept. 7 and distributed aid, while getting information from the camp authorities.

In her letter, Erdoğan begins by saying that she wants to share her feelings and thoughts regarding the visit, noting that hundreds of thousands of members of a community, deprived of political and social rights despite being one of the rooted groups in Myanmar, have fled to neighboring Bangladesh since August 25, while over 1,000 people died in the same period.

"It is very shameful to be a contemporary of this humanitarian drama which the international public opinion has shut their ears to and chosen not to see it. It was very painful to hear the stories of countless women, who were raped, whose houses were burned and children and husbands were murdered before their eyes. I think I will never forget the desperate looks of the women and children in the camps where we delivered 1,000 tons of humanitarian aid at the first stage," Erdoğan said.

The first lady stressed that Turkey has been closely involved in providing diplomatic support and humanitarian aid to Rohinya Muslims since her first visit to Myanmar in 2012, adding that the recent developments were "unfortunately a clear violation of Article 2 of the Universal Declaration of Human Rights, which foresees the protection of human rights without distinction of "race, sex, language, religion, opinion or origin."

"As a mother, woman and human being, I believe that we have to create a world where everyone can live together without anyone being subject to ethnic or religious discrimination," Erdoğan said, hoping that wives of world leaders could have a positive contribution to such efforts.

The first lady also underlined that Turkey was one the world's most humanitarian states which has been hosting three million Syrian and Iraqi refugees, while also trying to help others in need through government agencies and non-governmental organizations.

In her final words of the letter, Erdoğan repeated her wish to contribute the efforts for establishing the world peace by joining hands.

Rohingya Muslims, described by the U.N. as the world's most persecuted people, have faced increased fears of attack since dozens were killed in communal violence in 2012.

The latest violence against Myanmar's Muslim minority has resulted into the mass exodus of more than 400,000 Rohingya over the past three weeks, almost all of whom fled to the neighboring Bangladesh.

According to U.N. agencies, the Myanmar violence may eventually drive up to 1 million Rohingya into Bangladesh.