We welcome the role of Turkish leadership in Rohingya crisis: Bangladeshi envoy 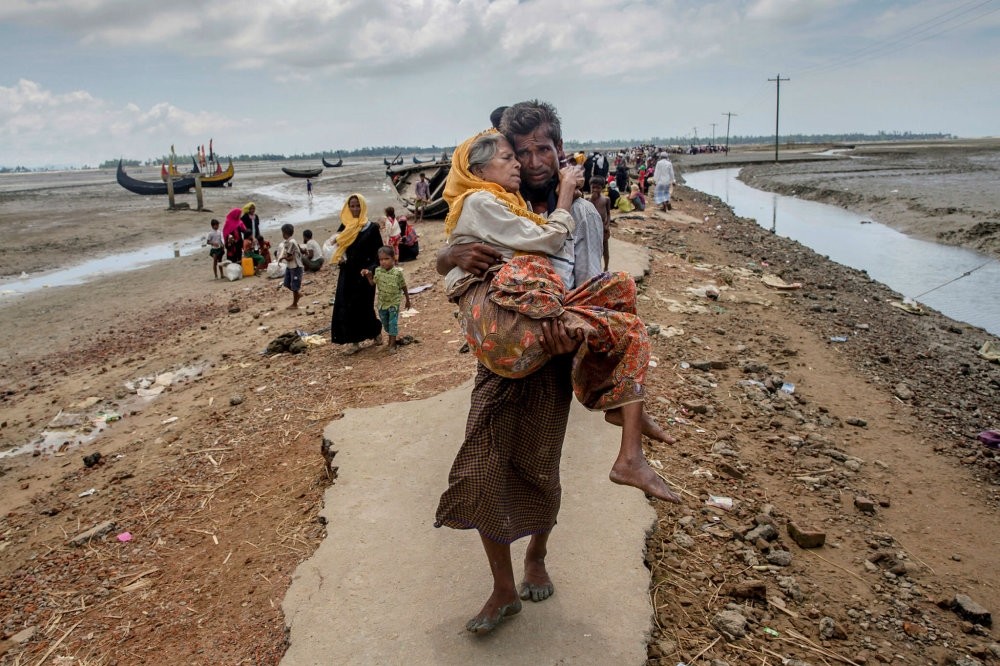 Bangladeshi Ambassador to Ankara M. Allama Siddiki expressed Dhaka's gratitude to Ankara for its immediate response to the humanitarian tragedy in Rakhine state, as nearly 450,000 Rohingya fled and took refuge in Bangladesh.
by Özgenur Sevinç Sep 26, 2017 12:00 am

Siddiki stressed the significance of aid from Turkey and other international actors to the Rohingya people, adding that the Bangladeshi government struggles over the difficult task of taking care of them on their own

Bangladeshi Ambassador to Ankara M. Allama Siddiki has expressed Dhaka's gratitude to Ankara for its immediate response to the humanitarian tragedy in Rakhine state in the Southeast Asian country of Myanmar, as nearly 450,000 Rohingya fled the military crackdown and took refuge in neighboring Bangladesh.

"The government of Bangladesh welcomed and expressed gratitude to Turkey and its leadership in helping the Rohingya Muslims," said Siddiki.

As the lives of the Rohingya were thrown into limbo, Turkey has taken an initiative in an effort to ease the pain of the refugees. Referring to the Turkish delegation's visit this month to the refugee camp in Bangladesh, including first lady Emine Erdoğan and Foreign Minister Mevlüt Çavuşoğlu, Siddiki stated that the visit was fruitful and they expect that this cooperation and partnership will continue.Commenting on Turkish Kızılay's suggestion to build a refugee camp in Bangladesh, Siddiki said they welcome the idea, however, it should be in coordination with the Bangladeshi Red Cross and Red Crescent. He added that Turkey's idea of locally procuring some aid packages is a constructive one.

While stressing the significance of aid from Turkey and other international actors to the Rohingya, Siddiki said that first and foremost the world community must accelerate efforts for a political solution, as this has been a protracted issue in the region awaiting resolution.

"You can give refugees a room, however, it is not going to solve the problem. They should have their own house and dignified lives in a free world," said Siddiki.

"For the last 40 years, the Rohingyas have been living under a state of persecution and torture at the hands of the Myanmar authorities," Siddiki added, pointing out that the recent incidents are not new developments.

The root cause of the conflicts dates back to the independence of Myanmar from British rule in 1948. During British rule, many laborers came to the region from Bangladesh and India. Even though the Rohingya had been living in the region before these arrivals, they have been labeled as "immigrants" in the region.Myanmar passed a citizenship law in 1982 that denied the recognition of Rohingya as one of many ethnic groups in the country. As they were denied citizenship, Rohingya Muslims have faced obstacles in every sphere of life; their chances of studying, working and participating in politics have been restricted.

Underlining that the Rohingya have been living in the region for centuries, Siddiki said, "In 1982, the Rohingya were stripped of their nationality; it is their inalienable right to live there with full dignity as nationals of that country."Violence has occasionally broken out for the last 40 years, and the latest military crackdown on Aug. 25 triggered an exodus of Rohingya to the Bangladeshi border.

Siddiki commented on the influx saying, "It is painful to see that in today's civilized world this kind of atrocity has been shown to a particular community by a government."

The total number of Myanmar refugees is about 800,000 on the Bangladeshi border with the recent influx of refugees.

The Bangladeshi government has been saddled with a difficult task and struggling mightily to provide the basic needs of food, shelter, medicine and registration for the refugees, Siddiki said, adding that Bangladeshi Prime Minister Sheikh Hasina accepted the refugees as their lives were at stake. The crisis in Myanmar has also been affecting the countries in the region, such as Malaysia, Thailand and Indonesia as they also host some Rohingya Muslims.

Touching on the ongoing violence, Siddiki said: "More than 10,000 houses have been burnt, and as many as 3,000 people were killed. All these have been done in the pretext of the militant attack on the Myanmar police and army on Aug. 25, 2017."

Stressing that militancy and radical activities should be confronted, Siddiki said Bangladesh is also fully committed to supporting the international community to maintain international peace and the fight against extremism. However, the killing of innocent civilians can never be justified by the Myanmar authorities, Siddiki added, pointing out that every state has the responsibility to protect the civilian population.

Myanmar leader Aung San Suu Kyi recently broke her silence on the atrocities in Rakhine state and gave a speech last week. "We are concerned to hear that numbers of Muslims are fleeing across the border to Bangladesh. We want to find out why this exodus is happening," said Suu Kyi.

Referring to statements by the Myanmar leader, Siddiki said, "How can a government say that they don't know why their own people are leaving the country? It is an unacceptable comment."The Rohingya crisis was also on the agenda of world leaders who attended the United Nations General Assembly last week. Myanmar authorities have been warned and called on to stop the violence immediately. In line with these remarks some responsible countries have taken measures such as suspending assistance programs to Myanmar and freezing military ties with the country, Siddiki added.

Criticizing the low attendance of world leaders at the U.N.'s session on the Rohingya, President Recep Tayyip Erdoğan said yesterday, "There is an ethnic cleansing in Rakhine state." The president added, "Currently, we do not know the exact numbers of the Rohingya people who lost their lives, however, the world is still oblivious to the humanitarian crisis." Erdoğan urged the world community to take action to reform international institutions.The president announced that the Turkish prime minister and deputy prime minister would soon pay a visit to Bangladesh in an effort to look for suitable areas to build refugee camps.Underscoring that it is vital to seek a political resolution for the issue, Siddiki urged the international community to give relief and guarantee of life to the unfortunate people of Rohingya as they need this support.

Siddiki contended that the future steps expected from the Myanmar authorities are ending the violence and setting up safe havens inside Myanmar for the Rohingya Muslims. "We hope that our humane position on the matter will encourage the authority and the government of the Myanmar to take similar steps, and they will take a humane position toward the problem," the ambassador added.