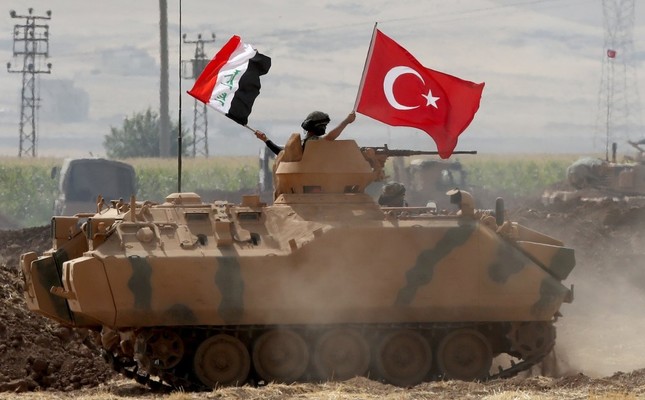 Soldiers hold Turkish (R) and Iraqi (L) national flags while standing in the turret of a Turkish armored vehicle during in a military exercise near the Turkish-Iraqi border in Silopi district, in Şırnak city, Sept. 26.

Stating that the main aim of the maneuvers is to make a psychological impact, experts say this move by Turkey and Iraq shows the world how determined both countries are concerning Iraq's territorial integrity

The Turkish Armed Forces (TSK) also made a statement confirming that the military drills on the border that have been ongoing since last week will be conducted together with the Iraqi military.

"The maneuver involves 35 soldiers and does not aims to make an impact. It is simply proof that this cooperation may turn into something bigger in the future," Ağar said. He added that Turkey's relations with Iraq have entered a period of healing, which will strengthen the hands of both sides, as well as other states in the region.

"The fact that Iraq is conducting a maneuver together with Turkey, amid the referendum being held in Iraqi territory, shows the entire world that Iraq will continue to conduct operations with Turkey," former member of the TSK and security expert Mete Yarar said.

Speaking to Daily Sabah, Yarar said that the maneuver aims to have a psychological impact on Iraqi Kurds. "It is a power indicator," Yarar said, going on to add that "It first aims to show the world the cooperation that exists between the two countries, while providing the legality for future operations. Lastly, it provides a rehearsal run for a possible real operation."

Turkey increased and tightened control at the Habur border gate yesterday in the country's southeast, in order to stop crossings from Northern Iraq.

The military exercises started a week before the KRG referendum in Silopi of Şırnak province, which is close to the border gate between Turkey and Iraqi Kurdistan.

According to the TSK's announcement on Saturday, the level of military drills being conducted near the Turkish-Iraqi border for the past six days has increased.

The TSK also said that the second stage of the drills will also be held while the maneuver continues with additional troops.

"Turkey supported the KRG in order to provide its own border security. However, it quickly realized that the KRG had misused this support. The KRG conducted the referendum with the approval of other states, rather than Turkey," Ağar said, indicating that the situation has created a trust issue for Ankara, concerning the KRG. In an emergency meeting held Saturday in Ankara, Turkish Parliament extended the mandate that allows military operations in Syria and Iraq to continue until October 30, 2018.

The mandate was due to expire next month and has been renewed in Parliament since initially being issued in 2014. The decree enables Turkey to conduct military operations across its southern border by sending troops to the region to prevent possible threats to its national security posed from neighboring Iraq and Syria.

The mandate, read in Parliament on Saturday, lists the national security requirements including the counterterror fight against the PKK and Daesh in Syria and Iraq. It also emphasizes the importance of Iraq's territorial integrity, saying that "separatism based on ethnicity" poses a threat to stability in Turkey and the entire region.

Share on Facebook Share on Twitter
Previous in Diplomacy President Recep Tayyip Erdoğan warned the Kurdistan Regional Government... Next in Diplomacy A possible series of sanctions to be imposed by the Turkish government...
DAILY SABAH RECOMMENDS