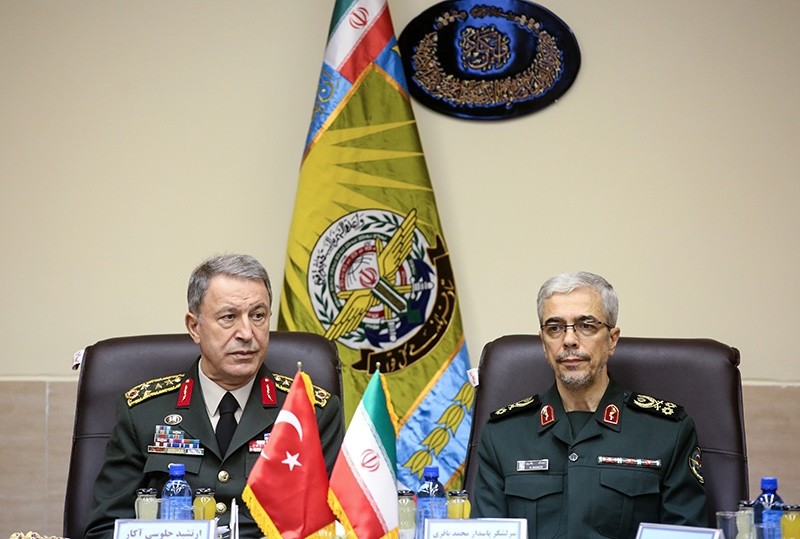 Turkish military Chief of General Staff Gen. Hulusi Akar met with his Iranian counterpart Major General Mohammad Bagheri on Monday in Tehran, and both generals underscored that bilateral cooperation will increase in the areas of security and counter-terrorism.

At the joint press conference held after the two generals met at the headquarters of the Iranian general staff in Tehran, Gen. Akar said,"Turkey and Iran have been two friendly countries with common values for centuries. Within these common values, we are improving our cooperation against existing threats and risks."

Touching upon counter-terrorism and border security issues, Akar added that Turkey and Iran have agreed to increase bilateral ties and cooperation in security related matters, to add to already strong political and economic relations.

Meanwhile, Bagheri said that Turkey and Iran have developed a common stance against the referendum held in Iraq's Kurdistan Regional Government (KRG).

He also said that the need for ensuring stability and peace in Iraq and Syria, and the humanitarian tragedy in Myanmar against the Rohingya Muslims, were also discussed during the meeting.

Akar arrived in Tehran on Sunday on an invitation from the Iranian chief of staff. He is expected to meet with Iranian President Hasan Rouhani, Defense Minister Amir Hatami and head of Iran's National Security Council Ali Shamkhani during his visit.

President Recep Tayyip Erdoğan is also due to visit Tehran tomorrow, where he is expected to discuss regional developments, counter-terrorism, and particularly the stance on the KRG's independence vote that took place on Sept. 25.
Last Update: Oct 02, 2017 5:37 pm
RELATED TOPICS