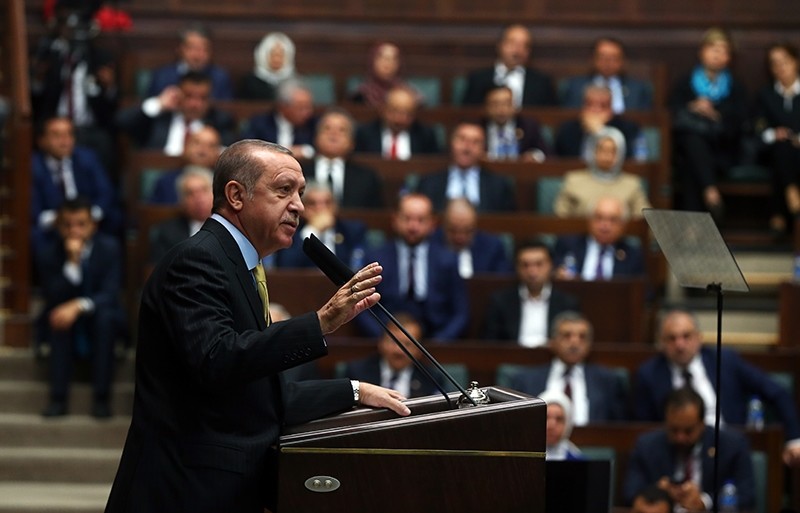 The objective of northern Iraqi Kurdistan Regional Government's (KRG) independence referendum is not to protect the rights of the Kurds there, but rather to turn the region into a bleeding wound by deepening ethnic tensions by pitting division between Kurds, Arabs and Turkmens, President Recep Tayyip Erdoğan said Tuesday.

"We have no intention of threatening anyone. We are carrying out our duty of warning with all sincerity. The referendum in northern Iraq is a new attempt to stab our region in the heart with a dagger. The issue is not the right of the Kurds. On the contrary, it is a matter of whether [the region] would fall into the traps and calculations of those wanting to push Kurds, Arabs, Turkmens, other groups and neighboring countries into endless conflicts and fights. We cannot allow the digging of a hole based on ethnic pettiness and sectarian enmity that is fueled with hatred. Iraq is a place where a common future must be built," Erdoğan said at his Justice and Development Party (AK Party) group meeting at Parliament in Ankara.

Erdoğan asserted that despite the critical regional development, Turkey stands strong and that those threatening Turkey are dropping off the map.

The Sept. 25 independence referendum, which Baghdad and Ankara have called illegitimate, saw Iraqis in KRG-controlled areas and in a handful of territories disputed between Irbil and Baghdad, including the historically Turkmen cities of Kirkuk and Mosul, vote on whether or not they wanted to declare independence from Iraq's central government.

"We hope the northern Iraqi administration comes to its senses soon," Erdoğan said, reiterating the call to KRG President Masoud Barzani to revisit his desire for independence, which Ankara believes also includes an attempt to change demographics in the region, and added that sanctions on the KRG would increase in the near future.

"We have made every effort to resolve the crisis in the region with facility, wisdom and compromise, and we will [continue]. For now, we are just content with embargoes in certain fields.

"If they do not come to their senses we will not hesitate to take further steps in accordance with the developments," the president said.

An opponent of Barzani is the only person to present his candidacy for next month's presidential election in the autonomous region, the electoral chief said Tuesday.

"By the deadline for candidates on Tuesday, we had received all the documents necessary for Mohammad Tofiq Rahim to be a candidate for the presidency of Kurdistan. He is the only person to have declared himself a candidate," electoral commission head Yari Hadji Omar told Agence France-Presse (AFP) by telephone from the regional capital. Barzani has repeatedly said he would not stand for re-election.

So far, there has been a ban imposed on international flights on airports in northern Iraq by the central government in Baghdad.

The KRG independence vote has also brought the Iranian and Turkish leadership closer to carry out diplomatic talks while Turkey has also launched joint military drills with Iraqi troops on their borders with the KRG.

Turkey's Chief of General Staff Gen. Hulusi Akar visited Tehran this week and Erdoğan is also expected to visit Tehran today, during which he is expected to discuss the KRG vote with Iranian officials.

The U.S. administration, which had strengthened its alliance with the KRG during the war against Daesh, is also siding with Baghdad in the crisis, refusing to recognize the outcome of the referendum. While the international community has mostly stood against the Sept. 25 vote, Israel has been the only country to openly support Barzani testing the waters for independence.

Meanwhile, Foreign Minister Mevlüt Çavuşoğlu expressed confidence in a return to normal relations with the KRG should it "correct its mistake."

"This was neither a democratic nor a legal referendum," Çavuşoğlu told Anadolu Agency's Editors Desk Tuesday.

"It is not too late yet. The Barzani administration could take a step back. If the KRG corrects its mistake, then we can continue our relations just as we did before the referendum took place," he said.

When asked if any deal is possible with Baghdad on opening a new border gate in the southeastern province of Şırnak, Çavuşoğlu said a border crossing in Ovaköy is technically possible, but stipulated that the Iraqi government "needs to provide security and a corridor beyond the Turkish border."

On Sept. 25, Customs and Trade Minister Bülent Tüfenkci rejected local media reports that Turkey blocked access into the country from northern Iraq at the Habur border gate. "There is no closure right now," Tüfenkci said, adding that crossings were "strictly controlled for security reasons."

He also said Turkish officials have been working on an alternative to the Habur border gate to bypass the KRG and do business directly with Baghdad.

Iraq's parliament adopted a bill Tuesday that would force Baghdad to halt all financial transactions with the Kurdistan Regional Government (KRG). The bill - now law - was submitted by the parliamentary financial committee. The legislation was approved by a wide majority of assembly members. A large number of Iraqi-Kurdish lawmakers, however, failed to attend the parliamentary session. Earlier Tuesday, the parliament also decided that all members of parliament who participated in last week's illegitimate referendum on Kurdish regional independence would be referred to Iraq's Federal Court for investigation. The moves by parliament come in the wake of a Sept. 25 poll in which Iraqis in KRG-held areas - and in several areas disputed between Baghdad and Irbil - voted on whether or not to declare independence from Iraq.