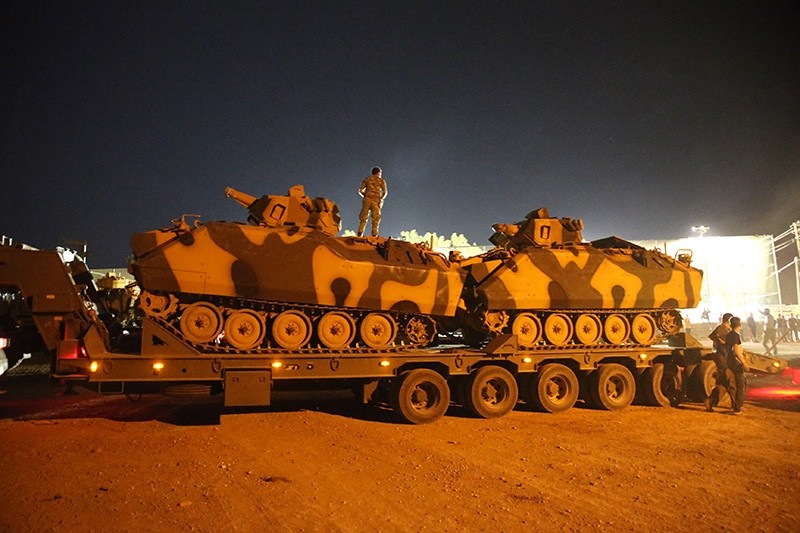 The U.S. Defense Department acknowledged support to a Turkish-led military operation in the northeastern Syrian province of Idlib to prevent clashes and ensure the de-escalation regime in the region.

"The Syrian regime has allowed northwest Syria to become a safe haven for al-Qaida terrorists that not only threaten the Syrian people and regional security, but also support international terrorist networks," he said.

The Pentagon statement underlined the U.S. designation of the Nusra Front, also known as Jabhat Fateh al-Sham, as a foreign terrorist organization. It added: "The Nusra Front has publicly declared itself an al-Qaida affiliate- it shares al-Qaida's terrorist aims and agenda, not those of the Syrian people."

Jabhat Fateh al-Sham is the leading group in the Hay'at Tahrir al-Sham (HTS) coalition that controls almost half of the territory in the Idlib area and the city itself.

Last August, Brett Mcgurk, the U.S. special envoy to the anti-Daesh coalition, said in a panel hosted in Washington that Idlib has become the largest al-Qaida safe haven since 9/11. McGurk's criticism of the Nusra presence next door to Turkey was perceived as an accusation by Ankara, which led to a small showdown. Following the panel, McGurk told journalists that the U.S. had wanted to help Turkey remove this threat from its borders.

The Pentagon statement on Saturday said the U.S. was not participating in the operations.

Experts in Washington criticize the Trump administration of being bypassed in the cease-fire agreement sponsored by Turkey, Iran and Russia. Turkish President Recep Tayyip Erdoğan said the Turkish Armed Forces (TSK) would prevent violence in the Idlib area while Russia and Iran would hold the regime territory to suspend attacks.

U.S. Secretary of State Rex Tillerson made a phone call to his Turkish counterpart on Saturday, according to Turkish Foreign Minister Mevlüt Çavuşoğlu. "We talked about Syria, Idlib and northern Iraq," he said.

After addressing the audience at the ruling Justice and Development Party's (AK Party) consultative meeting on Saturday, Erdoğan told press representatives that Turkish soldiers had not yet entered Syria's Idlib and were not yet involved in the operation, adding that the Free Syrian Army (FSA) was currently conducting the operation in the region.

The TSK is currently supporting the FSA from within Turkey's borders, while Russian forces are providing air support to the operation, Erdoğan said.

The head of Turkey's National Intelligence Organization (MİT), Hakan Fidan, also accompanied Akar and the generals during the visit.

Ankara launched Operation Euphrates Shield against Daesh last year on Aug. 24, backing FSA forces inside Syria, and recaptured several towns near its border from the terror group, including Jarablous, al-Rai, Dabiq and al-Bab. The operation dealt a heavy blow to the terrorist group's dominance in Syria.

In the operation, Daesh strongholds were defeated and more than 2,000 square kilometers of territory in northern Syria was seized from the terrorists. More than 50,000 Syrian refugees were relocated back to their hometowns in the liberated areas.