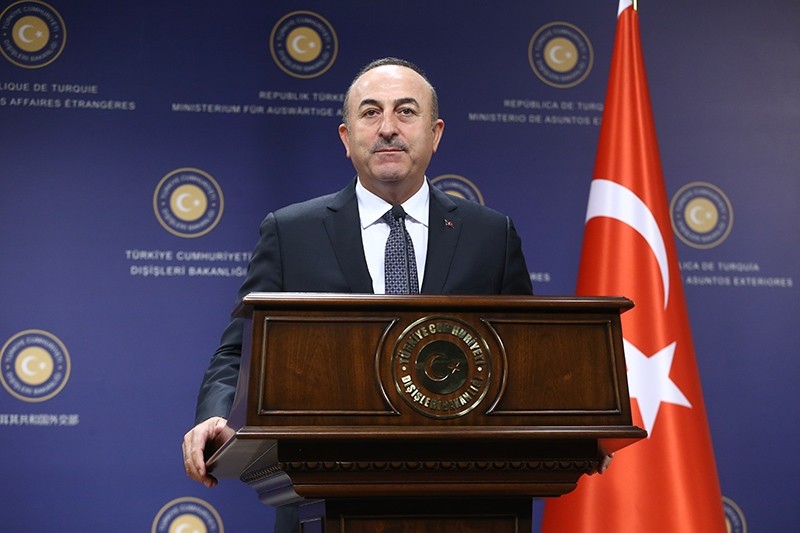 Foreign Minister Mevlüt Çavuşoğlu said Wednesday that the visa crisis with the U.S. is unnecessary, stressing that Ankara will not bow down to Washington's impositions over the strife, after relations became dangerously strained following the arrest of a local U.S. Consulate staffer.

Speaking at a press conference in Ankara, Çavuşoğlu said that Ankara is open to all forms of collaborative measures with the Trump administration. He added, however, that Turkey will not submit to impositions levied by the U.S.

"We will cooperate if their demands comply with our Constitution, the rule of law and sovereignty but we will not succumb to impositions and we will reject any conditions that we cannot meet," Çavuşoğlu said.

Asserting that the judiciary in Turkey is independent and a legitimate legal process in underway, Çavuşoğlu said that the visa crisis is unnecessary and that the U.S.'s attitude over the course of the issue is "immature."

The foreign minister said that such "unnecessary" issues should not exist between"two allies," adding: "We can sort out these issues through bilateral understanding."

Çavuşoğlu's statements came during a meeting between a U.S. delegation and Turkish counterparts regarding the crisis. It was later announced by foreign ministry sources that the meeting had ended and that it had proceeded in a positive atmosphere.

HaberTürk TV claimed yesterday that the U.S. laid out four conditions for solving the visa crisis, including that Turkey must provide information about its investigations into detained U.S. mission employees as well as evidence regarding the arrested U.S. Embassy worker and Turkish local, Metin Topuz.

Topuz, a Turkish employee working at the U.S. Consulate in Istanbul, was arrested on charges of espionage and links to the Gülenist Terror Group (FETÖ) which is blamed for the July 15, 2016 coup attempt in Turkey that killed 249 people. According to the indictment, the suspect was in contact with a number of former police chiefs in Istanbul where he worked, and all the police chiefs involved in the 2013 coup attempts were FETÖ members.

He was also in touch with Oktay Akkaya, a former lieutenant colonel who was among the main actors in the 2016 coup attempt. "The suspect acted as a liaison between members of FETÖ and its leader, Fetullah Gülen, who lives in Pennsylvania," the indictment claims, contending there is strong evidence to justify Topuz's arrest.

His arrest sparked a crisis between the two countries as Washington decided to halt all non-immigrant visa services at its missions in Turkey, which faced quick retaliation in kind from Ankara. The crisis swiftly escalated as President Recep Tayyip Erdoğan slammed then-U.S. Ambassador to Ankara John Bass for what Erdoğan asserted was his role in the suspension of non-immigrant visa services in the country. "There is nothing to discuss with the U.S. if the administration initiated the visa row," Erdoğan said, adding that if the decision was made by the envoy himself, then he should be removed from duty.

Since the crisis began, both the ruling Justice and Development Party (AK Party) and the opposition have displayed a common stance regarding the visa issue. All parties have said what the U.S. has done is wrong and contrary to the alliance between the two countries.