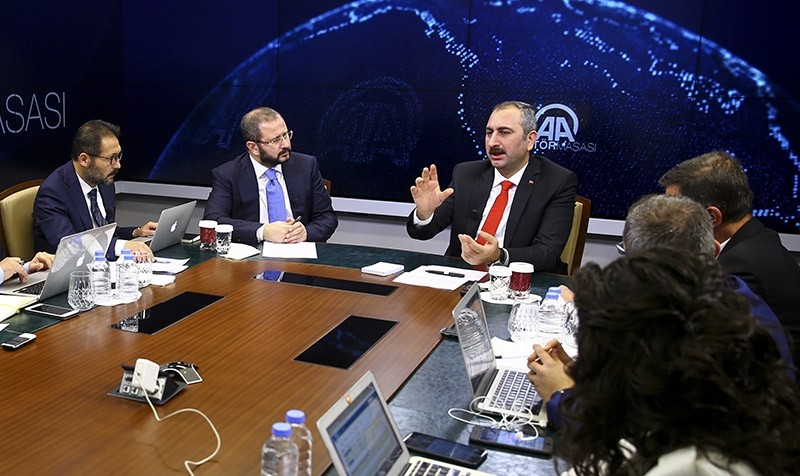 Justice Minister Abdulhamit Gül said Thursday that he hopes positive developments will soon take place regarding the visa spat, a day after Turkish and U.S. delegations held discussions over the matter.

"The meeting was very productive" Gül told Anadolu Agency's Editor's Desk, and added that he hopes the next steps that will be taken by both sides will provide even better results.

He noted that it is not possible to give a date for the resolution of the visa crisis, and added that Turkey will retaliate in kind to U.S. decisions.

The minister also responded to allegations claiming that the U.S. consulate staff Metin Topuz who was detained by Turkey for espionage and terrorism was not authorized to speak to his lawyer.

"All procedures are being conducted in line with legal provisions" Gül said, adding that Topuz was able to see his lawyers during detention and before the court, and was also allowed to see his family.

"Therefore I think that the U.S. reacted disproportionately during the process [of Topuz's detention]" Gül added.

He also highlighted that Topuz, who worked for the U.S. consulate is a Turkish citizen and the U.S. should not take his arrest personal, saying that if a Turkish citizen commits a crime he/she will be held accountable by the law.

"We will be the first to protect him if he is indeed innocent" Gül said.

On Oct. 8, the U.S. embassy in Ankara suspended all non-immigrant visa services in its diplomatic facilities in Turkey after the arrest of Metin Topuz over Gülenist Terror Group (FETÖ) ties.

Turkey retaliated by halting visa applications from the U.S.