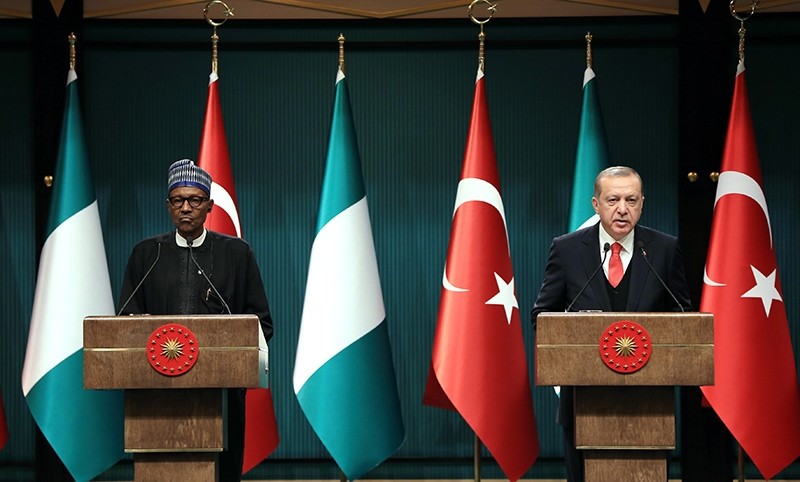 The two presidents discussed bilateral and international issues during their meeting, after which they held a joint news conference.

Thanking Buhari for his visit despite busy schedule, Erdoğan stressed that due to its population, economy and potential Nigeria was an important global actor.

"We are in full solidarity with Nigeria. We have exchanged ideas on many topics, especially defense and education, during our earlier meeting. We had an opportunity to discuss our steps for the future," Erdoğan said.

He also drew a parallel between the two countries in terms of war on terror.

"Whatever terrorist organization Nigeria is fighting, Turkey is also fighting terror. Boko Haram claimed lives of suffering people. I would like to express that there is no difference between [Gülenist Terror Group] FETÖ, Daesh and Boko Haram, no matter what they serve or claim or their name is – all of them are gangs of murderers who feed on the blood of innocents," Erdoğan said.

Turning to the issue of economic cooperation, Erdoğan said that Turkey and Nigeria aim to reach a trade volume of $1,25 billion.

"Turkish businessmen are ready to take part in the development of Nigeria. Nigeria is one of the most important power centers of the entire continent with a population of 182 million. It also has a very dynamic economy. [Turkish Cooperation and Coordination Agency] TIKA is planning to open an office in Nigeria," Erdoğan said.

Buhari arrived in Turkey to attend the Developing-8 Countries (D-8) meeting in Istanbul on Friday.​ The ninth summit marks the 20th anniversary of the economic group consisting of eight emerging economies from the Muslim world.

The organization was established on June 15, 1997, by Turkey, Indonesia, Bangladesh, Egypt, Iran, Malaysia, Nigeria and Pakistan.