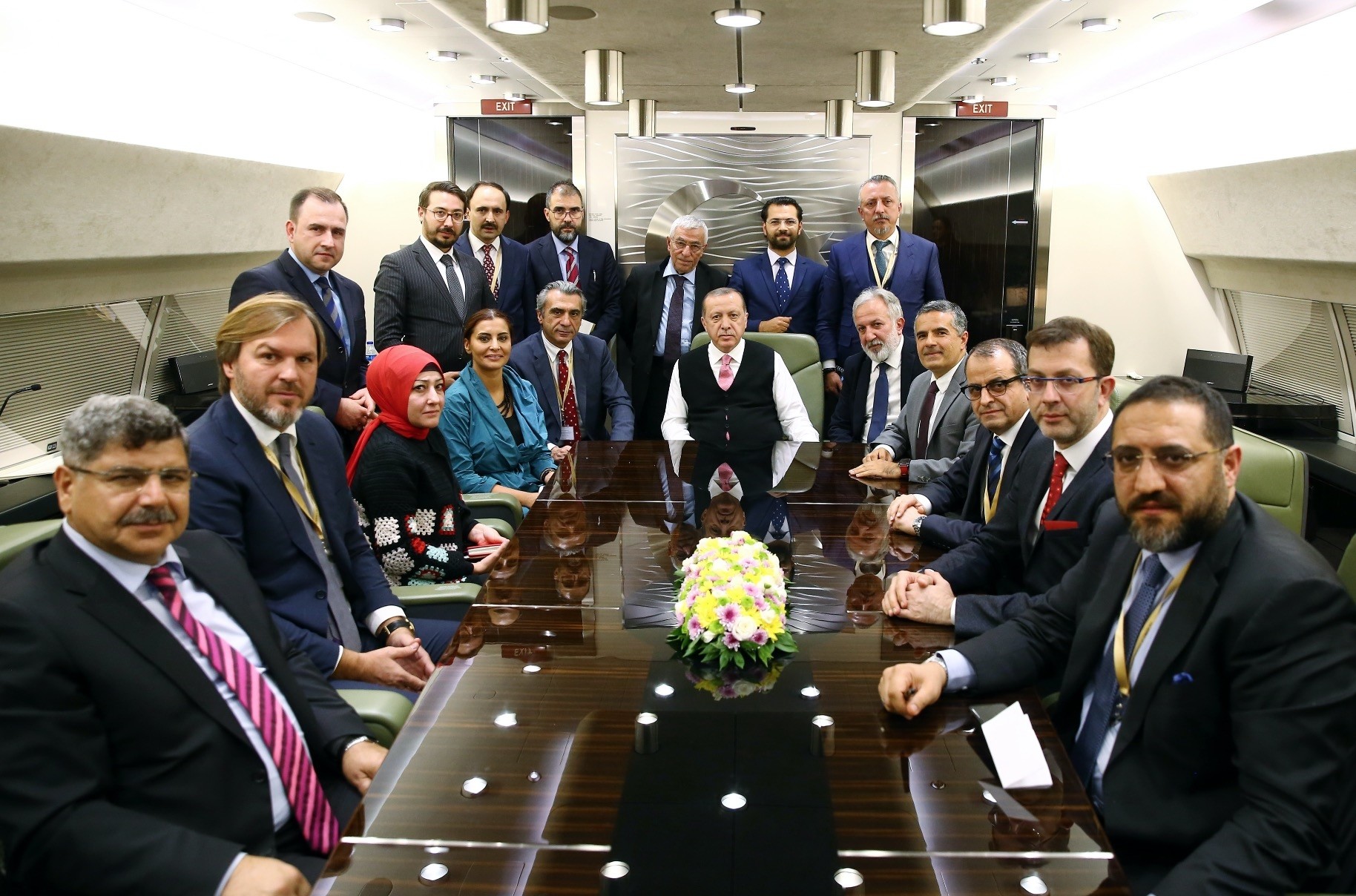 President Erdou011fan underlined that Kirkuku2019s demographic and ethnic sensitivities and legal status were not taken into consideration by Irbil despite Ankarau2019s cautionary words, resulting in the current situation.
by Serdar Karagöz Oct 19, 2017 12:00 am

KRG President Barzani insisted on holding a referendum despite many warnings from Ankara at the cost of Irbil and the region, President Recep Tayyip Erdoğan says

The Kurdistan Regional Government (KRG) has lost the majority of territories outside of the officially recognized autonomous region including Kirkuk, Sinjar, Makhmour and Qanaqin, after the Iraqi army and pro-Baghdad militia launched an offensive late Sunday to take over control following the dispute that emerged from the KRG's independence referendum last month. In addition, the U.S. and Germany have also abstained from taking steps in favor of KRG President Masoud Barzani, who is now embroiled in a row with Baghdad. All oil fields and facilities in Kirkuk province are now under the full control of Iraq's Oil Ministry, a ministry spokesman said Wednesday.

"The ministry now also holds oil wells and facilities in Kirkuk," Asim Cihad told Anadolu Agency (AA). On Monday, Iraqi forces captured Kirkuk, three weeks after the KRG held a referendum on the secession of northern Iraq's Kurdish region. The oil-rich province of Kirkuk is cited to be among the territories disputed between the Iraqi central government and the KRG, which is defined in Article 140 of the Iraqi Constitution, adopted after the U.S. invasion of Iraq and the toppling of Saddam Hussein.

"The Kirkuk governor [Najmaldin Karimi], who made the province a matter of negotiations as if they owned it, has now escaped and is gone," the president said, adding that the demographic sensitivities of Kirkuk, composed of Turkmens and Arabs, were not taken into consideration by either the Barzani administration or the Patriotic Union of Kurdistan (PUK).

On Monday and Tuesday, Iraqi troops and allied militias retook the northern province of Kirkuk and its lucrative oil fields, as well as formerly KRG-held areas of Nineveh and Diyala provinces, in response to an illegitimate vote for independence last month.

The Turkish president added that Ankara is closely monitoring developments as well as steps being taken by Baghdad, including appointing a new governor to Kirkuk.

Erdoğan said that Iraqi Prime Minister Haider al-Abadi is awaiting an invitation from Ankara to discuss the recent developments, which is likely to come either before or after the Turkish president's visit to Saudi Arabia.

"As you know, we have closed our airspace to the Kurdistan Regional administration. We are also discussing what can be done on the ground, as well. We will see whether they will transfer the control of borders to the central government or not. If it happens, we will put forward the condition that the needs of people in northern Iraq are addressed by Baghdad. We have not closed the borders. However, this can also happen anytime," he said. The president also emphasized that if the news of Hashd al-Shaabi taking control of the Sinjar and Makmour regions is true, then Ankara could launch separate discussions with the parties in dealing with it.

'Visa crisis should be resolved soon'

Commenting on the recent visa crisis between the U.S. and Turkey, President Recep Tayyip Erdoğan mentioned that he does not think the crisis will be a long-term issue, saying: "It is my hope that the meetings between delegations will yield a result soon, that the visa issue will be left behind and relations will resume their normal track."

Although there have been some exceptions made regarding visa applications, the president said this should not be considered a signal of normalization, pointing out that such exceptions were made for medical situations only.

"Metin Topuz, one of the names who caused the visa crisis with the U.S., was arrested. However, there are talks about a second person known as N.M.C., suggesting that he is hiding at the consulate. It was also on the news. His wife and daughter were questioned but later released, under the condition that they be placed under judicial control," Erdoğan said, also highlighting that in the case of a crime being committed, it is the duty of the judicial authorities to take necessary steps in the scope of the rule of law.

'US must resolve issues with well-intended diplomacy'

President Erdoğan also commented on the recent tensions between the Trump administration and Iran, saying that Turkey's position is clear and that disputes must be solved with good intended diplomacy.

"Those who want to impose sanctions on Iran, must first look at themselves. There cannot be an understanding that says 'a work is unlawful when done by those other than us." The issues must be resolved through good intentions and diplomacy.

Criticizing U.S. authorities for not acting in accordance with well-intended diplomacy, Erdoğan implied that Washington says one thing but does another, noting: "They [the Trump administration refer to us as a] 'strategic partner.' However, this is not reflected in relations. They [referring to outgoing U.S. government] go ahead and issue arrest warrants for my security personnel. An ambassador can damage Turkey-U.S. relations," Erdoğan said in reference to the outgoing U.S. Ambassador John Bass.

Responding to a question on whether Turkey's ties with the EU have seen any improvements recently, President Erdoğan said Ankara's relations with the latter have suffered tremendously during the election period of several member states.

"In fact, they seriously upset us. However, in politics ties should not be cut. Our efforts right now are to normalize relations without cutting ties [with the EU]. However, we also expect our allies to take a positive approach [to the issue]," the president said. "I also hope the results will be positive."

President Erdoğan also commented on the recent debates over the resignations from several Justice and Development Party (AK Party) mayors, saying those mayors were elected as a result of nominations by party executives and were not independent candidates, adding that if party leaders make a decision calling for their resignation from the post, those mayors should not resist the decision. "Those asked to resign cannot look at the matter as an issue of 'I came here, I am going to stay here,'" he said. The president added that he expects the mayors of Ankara and Bursa to also offer their resignations in the coming days, in addition to several mayors who already have, including Istanbul Mayor Kadir Topbaş.