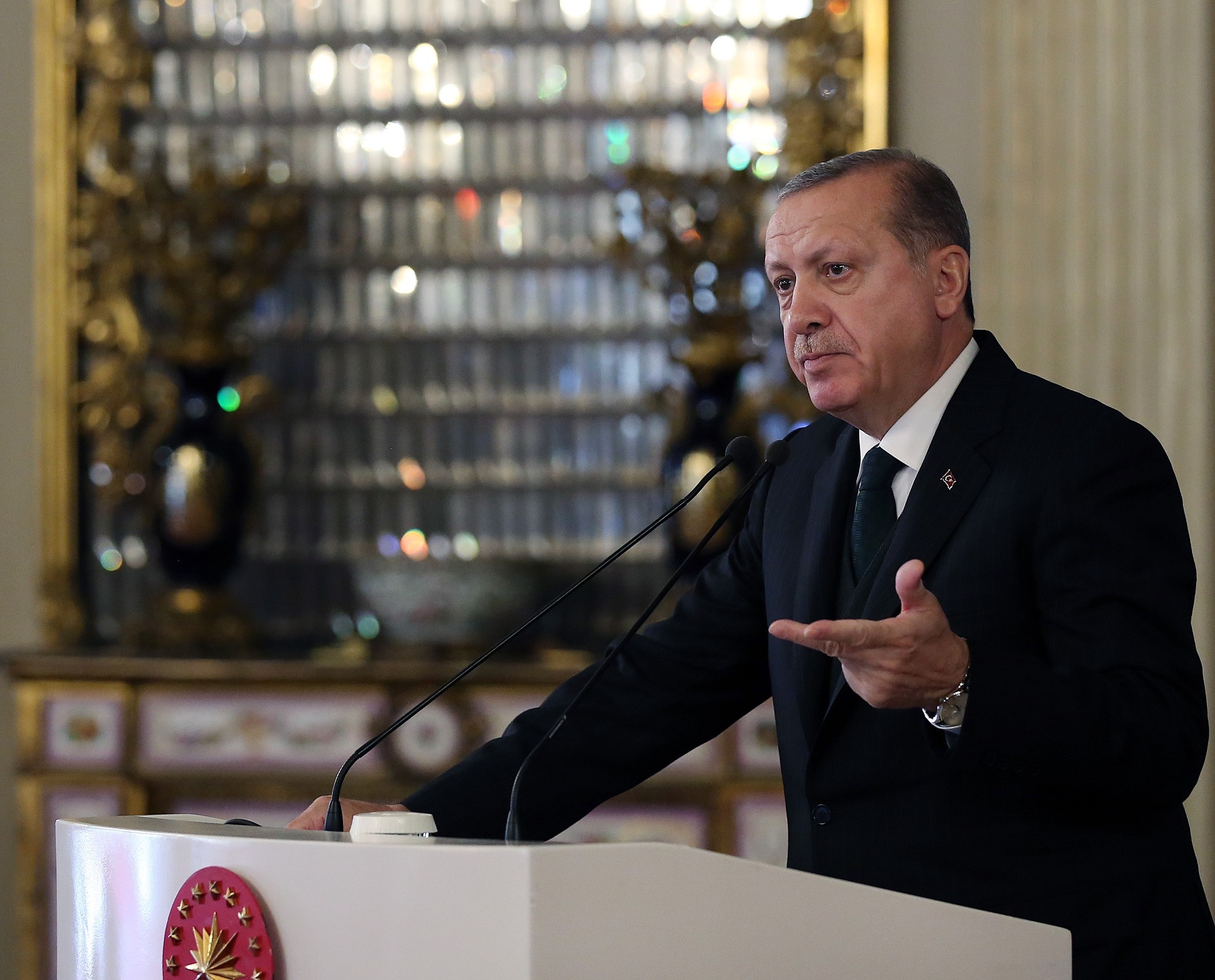 President Erdou011fan bashed the U.S., saying that although in one-on-one meetings they are on Turkeyu2019s side, their actions show otherwise.
by Daily Sabah Oct 21, 2017 12:00 am

The U.S.'s silence over YPG terrorists' unfurling of a banner of PKK leader Öcalan in Raqqa was highly criticized by Turkey since it is a move that is contradictory to the alliance between the two countries

Ankara harshly criticized the U.S.'s continued support to the Syrian Democratic Forces (SDF), which is predominantly led by the People's Protection Unit (YPG), the Syrian affiliate of the PKK terror group, under the pretext of fighting Daesh. President Recep Tayyip Erdoğan criticized the U.S. yesterday by saying that it is inconsistent to call the PKK a terrorist organization while supporting its Syrian affiliates, the YPG and the Democratic Union Party (PYD). "How will the U.S. explain this?" Erdoğan asked yesterday during the Developing 8 (D-8) Organization for Economic Cooperation summit in Istanbul, referring to the YPG terrorists raising flags with pictures of Abdullah Öcalan, the leader of the PKK, after Raqqa was liberated from Daesh this week.

"When it comes to it, you say the PKK is a terror group. The EU states say [the PKK] is a terror group. In France, they hung the poster of the terror leader on the building of a state-run TV station. During the one-on-one meetings, they say we are on your side. If they are on our side, would they act like this?" President Recep Tayyip Erdoğan added.

The U.S. declined to directly comment Friday on the unveiling of a huge banner of jailed terror leader Öcalan by the PKK/PYD in the Syrian city of Raqqah. 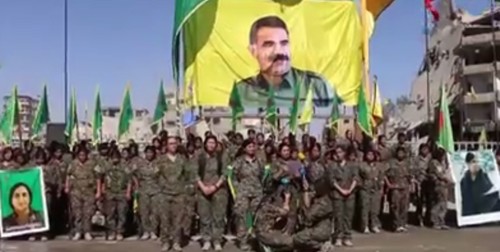 Female PKK terrorists celebrated the victory Thursday against the Daesh in Raqqa, Syria under the portrait of Öcalan, according to Ronahi TV, a Kurdish TV media outlet.

Prime Minister Binali Yıldırım also said yesterday that the U.S.' support of the SDF not only makes it a partner of a terrorist organization but also endangers the future of both Turkey and Syria.

"We have always told to the U.S., which is our ally, that cooperation with a terrorist organization in order to defeat another one would lead to terrible results. These pictures show this situation very clearly. What is the U.S. waiting for to accept that the YPG and PYD are the terrorist organizations?" Yıldırım asked, while adding that exhibiting the terrorist leader Öcalan in Raqqah alone harms Turkish-U.S. relations more than anything.

The PKK/PYD, which has waged war against Turkey for more than 30 years, was among the U.S.-backed SDF to take Raqqah from Daesh earlier this week. The taking of the eastern city — considered Daesh's de facto capital — was marked by the unfurling of a huge banner bearing Öcalan's image in the main square.

Questioned about "a victory enabled by the U.S. that is dedicated to a terrorist group," Pentagon spokeswoman Dana W. White declined to comment directly.

"We work with the SDF," she said at a news conference. "And we work to help them focus on fighting Daesh. That is our sole responsibility. That's our sole commitment. And we'll continue to work by, with and through the SDF to ensure that we defeat Daesh."

U.S. media outlets have also questioned the future of Raqqah after the defeat of Daesh since it is an Arab city and having Kurds as the governors may create problems.

In his article regarding the issue, Jamie Dettmer from Voice of America (VOA) said there are many unanswered questions about the future of the city. "It is not determined yet who will rebuild the destroyed city. How many of the residents of the city will return to Raqqah and when they will? Who will govern the city," Dettmer asked, while underlining that if Arabs sense that Kurds are dominating them and do not respect them, then problems will arise. He also highlighted that some Arabic groups have already started to raise their voices on Twitter saying, "Raqqah is being slaughtered silently."

Aron Lund, an expert from The Century Foundation, a U.S. based think tank, also believes that since they will face a destructed city when they return, the civilians of Raqqah will not internalize the new administration of the city, which may eventually even lead to the return of Daesh.

The SDF first broke into Raqqa with support from the U.S. in order to eliminate Daesh from the city in early June and penetrated its Old City a month later.

On Oct. 17, a commander with the U.S.-backed forces battling Daesh said the city of Raqqa has been liberated from Daesh militants and that combing operations are underway to clear the city of land mines and terrorist sleeper cells.

Dozens of militants who refused to surrender made their last stand in the city's stadium, which had a notorious reputation as the group's prison and dungeons. It wasn't immediately clear if the Daesh militants were still holed up inside the stadium.

The Syrian Observatory for Human Rights (SOHR) also confirmed Tuesday that Daesh has been cleared from Raqqa. The battle has left at least 3,250 people dead, with at least 1,130 of them civilians, the SOHR added, stating that hundreds more were still missing and may have been buried alive in their homes by shelling, bombs and airstrikes.

The breakthrough in the operation to retake Raqqa came after a deal was struck allowing the evacuation in recent days of civilians who were being held as human shields. Under the deal, a total of 275 Syrian Daesh fighters and relatives also surrendered to the SDF, though it was unclear whether they would be given safe passage elsewhere.

Losing Raqqa has been a huge blow for Daesh, which has steadily lost territory in Iraq and Syria, including Iraq's second-largest city Mosul, a few months ago. The group declared the city located on the banks of the Euphrates River, which it seized from other Syrian opposition fighters in early 2014, as the capital of its self-declared "caliphate," transforming the once vibrant metropolis into the epicenter of its brutal rule where opponents were beheaded and terror plots were planned. The terrorist group has also suffered setbacks in the eastern Syrian region of Deir ez-Zor, where Russian-backed regime forces retook swathes of territory, further reducing a "caliphate" that three years ago was roughly the size of Britain.

The threat of fresh attacks on Western countries by foreign fighters fleeing the fallen Daesh terrorist group stronghold of Raqqa dominated a Group of Seven (G-7) meeting of interior ministers in Italy. The two-day gathering, which kicked off yesterday on the Italian island of Ischia, comes just days after the defeat of Daesh in its self-declared capital of Raqqa. Most foreign fighters are believed to have fled over the past few months. Experts say those who stayed now hope to travel on to Europe to seek revenge for the destruction of the "caliphate."