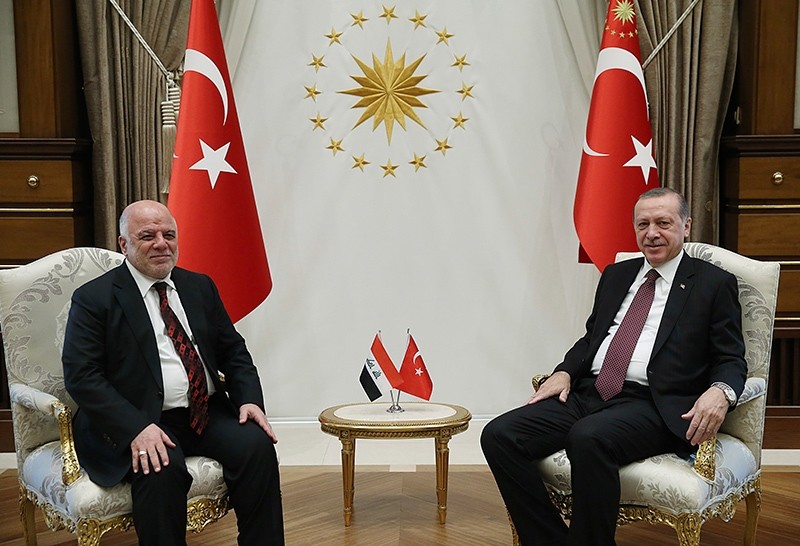 President Recep Tayyip Erdoğan said Monday in Ankara that Turkey will lend support to Iraq in so that it will rise again from the destruction, and Ankara is ready to take joint steps for the peace and security of the region. He also stressed that Turkey's position on the controversial independence vote in Iraq's Kurdistan Regional Government (KRG) has not changed.

"Our wish is that Iraq will rise again from the ashes and destruction. We will lend our support for this and take the steps necessary for the peace and security of the region," Erdoğan said at a joint press conference with Iraqi Prime Minister Haider al-Abadi.

Amid the ongoing tensions between the Iraqi central government and northern Iraq's Kurdistan Regional Government (KRG), Abadi arrived to hold talks with Prime Minister Binali Yıldırım and Erdoğan. Abadi said he visited Turkey to enhance relations and that they are ready to boost ties between the people of the two countries and the governments, which have historical and cultural roots.

The timing of the controversial Sept. 25 independence referendum held in the KRG and areas contested with Baghdad was criticized by KRG opposition parties and neighboring countries, which accused KRG President Masoud Barzani and his ruling Kurdistan Democratic Party (KDP) of trying to raise their declining popularity with the referendum. The loss of Kirkuk and other contested areas started a new political debate in the KRG, with each party blaming the others for the aftermath.

The KRG decided on Monday to postpone presidential and parliamentary elections scheduled for Nov. 1 by eight months. Barzani's term in office came to an end in 2015, but elections were postponed citing the Daesh threat in the region.

Ankara previously warned Barzani not to continue with the referendum, with officials saying it would cause more conflicts in the region. Ankara stressed that cooperation with Baghdad will continue and it will take all necessary precautions for Turkey's national security.

Commenting on the referendum, Erdoğan said: "Our stance on the illegal referendum decision by the KRG has not changed – since the beginning we expressed that we favor the territorial integrity of Iraq."

Erdoğan said that as the repeated warnings from Ankara were not taken into consideration, Turkey had to impose some sanctions on the KRG. "I believe that we have reached a positive point with the joint steps taken by Turkey, Iraq and Iran," he said.

Neighboring Iran was also deeply opposed to the referendum, in which more than 90 percent voted in favor of independence from Iraq.

The current trade volume between Turkey and Iraq is $9 billion, Erdoğan said, adding that it could further grow, as Ankara is ready to provide support for efforts to operate the oil pipeline with Baghdad.

Erdoğan also signaled for the need of further cooperation against the PKK terrorist organization in Iraq: "We know of the PKK's presence in areas such as Sinjar and Qandil. Turkey is in for the fight against this group in solidarity with Iraq."

Erdoğan also praised the Iraqi central government for almost driving Daesh completely out of the country despite early blows dealt by the terrorist group, adding that another terrorist group – the PKK – knows this is an opportunity for them.

Meanwhile, Abadi said that the parties discussed a project that could possibly help stabilization in the region.

"We care about the continuity of bilateral relations [between Iraq and Turkey]. We do not want any country to intervene in our personal interests. We must be a source of hope for our young people. We have to win over our young people, who make up 60 percent of our region, by offering job opportunities to them," Abadi said.

Abadi also met with Prime Minister Binali Yıldırım at the Çankaya Prime Ministerial Office later in the day. In a joint press conference, Yıldırım said that the common aim is to work to prevent terror groups from arising in territories of Turkey, Iraq and Syria.

Yıldırım said that Turkey will provide necessary aid to central Iraqi government to regain the control of Habur border gate, the main passage between Turkey and Iraq currently controlled by the KRG.

"We desire to work more closely with Iraq from now on to increase mutual investment, with trade volume being in the first place, and to reconstruct and increase the welfare of the both countries," Yıldırım said, noting that the two leaders have agreed to hold a joint cabinet meeting in Turkey.

Meanwhile, the KRG announced in a statement early Wednesday that it is ready to freeze the results of the referendum, demanding the declaration of an immediate cease-fire and halt all military operations in KRG. Yıldırım Wednesday criticized Barzani for "insisting on the mistake" of holding an independence referendum despite widespread objections. Speaking at the Aegean Economic Forum in İzmir, Yıldırım said: "If you would return to this point [of freezing the results], why did you insist on this mistake? Why did you not listen Turkey's advice?"

"As Iraq and Kurdistan are faced with grave and dangerous circumstances, we are all obliged to act responsibly in order to prevent further violence and clashes between Iraqi and peshmerga forces. Clashes have caused damage to both sides and could lead to continuous bloodshed, inflicting pain and causing social unrest among the different components of the Iraqi society," the KRG statement said.

"Certainly, continued fighting does not lead any side to victory, but it will drive the country toward disarray and chaos, affecting all aspects of life," the statement went on to say, calling for an immediate cease-fire and halt to all military operations in the KRG, a freeze of the results of referendum and a start to open dialogue between the KRG and Baghdad on the basis of the Iraqi constitution.

Ankara had forged close ties to the KRG, but had urged officials in Irbil not to hold the vote, warning of consequences that would isolate the region. It closed its airspace to flights to and from northern Iraq and said it was considering closing its border gates to the region as further reprisal.