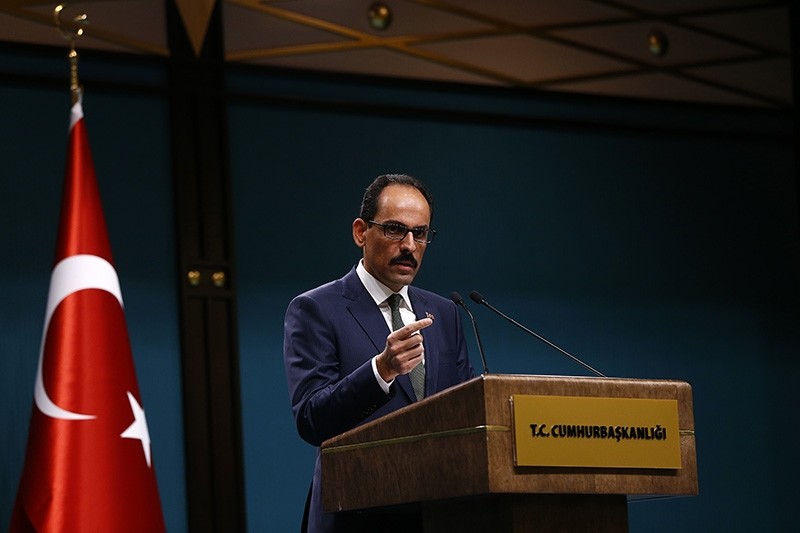 The Syrian peace congress that was scheduled for Nov. 18 has been postponed and the PKK-linked PYD will not be invited if it is held later on, as Russia decided upon Turkey's objections, presidential spokesman Kalın confirmed Sunday

Moscow's invitation to a Syrian National Dialogue Congress initially set for Nov. 18 has been postponed to a later date due to Turkey's objection to the invitation of the PKK-linked Democratic Union Party (PYD) to the conference, presidential spokesman İbrahim Kalın said Sunday. Kalın said Turkey was in the middle of deciding whether to accept or decline the invitation to the congress when news came that it had been postponed. "We found out that the congress was announced as a fait accompli. We immediately objected," he told news channel NTV.

"Afterwards, the Kremlin contacted us and stated that they had postponed this meeting." Kalın said Turkey will not be attending the meetings but may send an observer. "While it is not certain yet, what Russia has told us is that the meeting has been postponed for now, and the PYD will not be invited," he added. Kalın previously stated that the invitation of the PYD, the Syrian offshoot of the PKK terrorist organization, is unacceptable for Turkey. The PYD has controlled large swathes of northern Syria since the Assad regime transferred control of predominantly Kurdish areas bordering Turkey to the terrorist group in the early stages of the Syrian civil war.

Since then, the Syrian Democratic Forces (SDF), an umbrella organization dominated by the PYD and its armed wing, the People's Protection Units (YPG), has extended its control over nearly one-third of Syrian territory, including predominantly Arab regions, thanks to the U.S.-backed coalition's support under the pretext of fighting the Daesh terrorist group despite Turkey's objections.

During the last round of Syria peace talks in the Kazakh capital of Astana late last month, three guarantor countries – Russia, Turkey and Iran – agreed to discuss proposals for holding a national dialogue conference.

Responding to a question regarding President Erdoğan's remarks on possible military operations to Qandil and Sinjar, Kalın said the U.S. opened a huge area for the PYD and YPG under the guise of the fight against Daesh, pointing to the terror groups' celebration in Raqqa which included the display of posters of the PKK leader's imprisoned Abdullah Öcalan after the city was captured from Daesh. "There might be an operation in Qandil or Syria. Turkey is engaged in extensive effort in the war against terrorism," he said.

Presidential spokesperson Kalın also responded to a question regarding possible military collaboration with Iran, saying Ankara is already engaged in cooperation with Tehran on security, adding that this will continue while refuting claims of Turkey is drifting away from the West. "This discourse is fabricated to put pressure on Turkey. We do not see this [cooperation with Iran] as an alternative to NATO," he said.

Since then, hundreds of thousands of people have been killed in the conflict, according to U.N. figures.