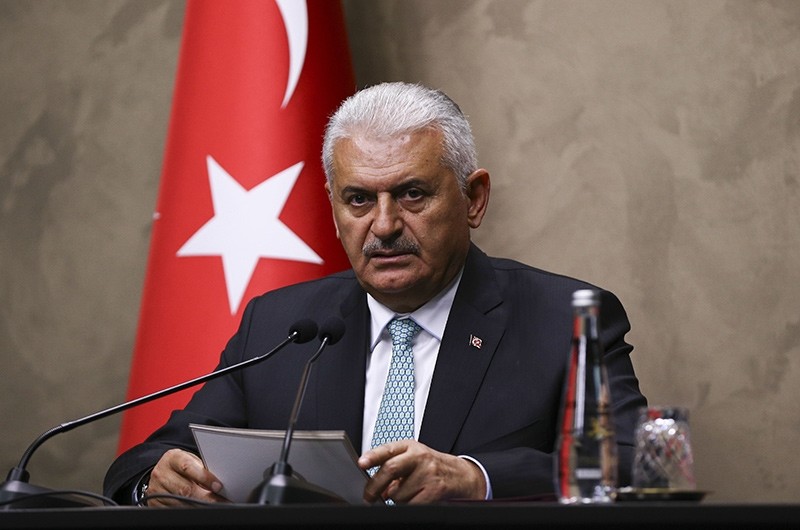 The U.S. and Turkey resuming visa processes on a "limited basis" is a positive development, Prime Minister Binali Yıldırım said Tuesday, while he denied giving assurances to embassy staff in the country, saying that it contradicts the principle of the rule of law.

Speaking to reporters at a news conference in Ankara Esenboğa Airport ahead of his visit to Washington to meet U.S. officials, Yıldırım said he hopes to improve ties between the two countries.

However, he noted that while improving ties, Turkish officials will preserve sensitivities of the country and the people, and hoped that U.S. officials respect that.

The prime minister denied embassy statement claiming that Turkey gave assurances for staff, saying that Turkey is a state governed by the rule of law and negotiation of such requests would violate those principles.

He noted that all processes are conducted under the rule of law and no exceptions will be made for anyone.

Yıldırım highlighted that there are Turkish nationals detained in the U.S. and vice versa, and hoped that the U.S. pays attention to Turkey's concerns during their prosecution.

"Likewise, they make similar demands and these are discussed through diplomatic channels" Yıldırım said, adding that they hope to reach a final resolution.

The U.S. Embassy suspended the visa services at its diplomatic missions in Turkey in early October following the arrest of Metin Topuz, a longstanding U.S. consulate employee and a Drug Enforcement Administration (DEA) agent at the Istanbul Bureau, over ties with the Gülenist Terror Group (FETÖ).

Topuz has been linked to a number of FETÖ suspects, including police commissioners and former prosecutor Zekeriya Öz, a fugitive accused of attempting to overthrow the government through the use of force, according to a judicial source who asked not to be named due to restrictions on speaking to the media.

Following the arrest, the U.S. Embassy in Ankara said all non-immigrant visa services in its diplomatic facilities in Turkey were suspended. Turkey responded to the U.S. move by saying it had halted processing visa applications from the U.S. The pause, announced online by the Turkish embassy in Washington, applies to visas in passports, electronic visas and visas at the borders, and was also effective immediately.

Yıldırım will be meeting with U.S. Vice President Mike Pence and his visit is expected to focus on talks regarding Gülen's extradition to Turkey.