From Syria to trade, Erdoğan, Putin have plenty to talk about 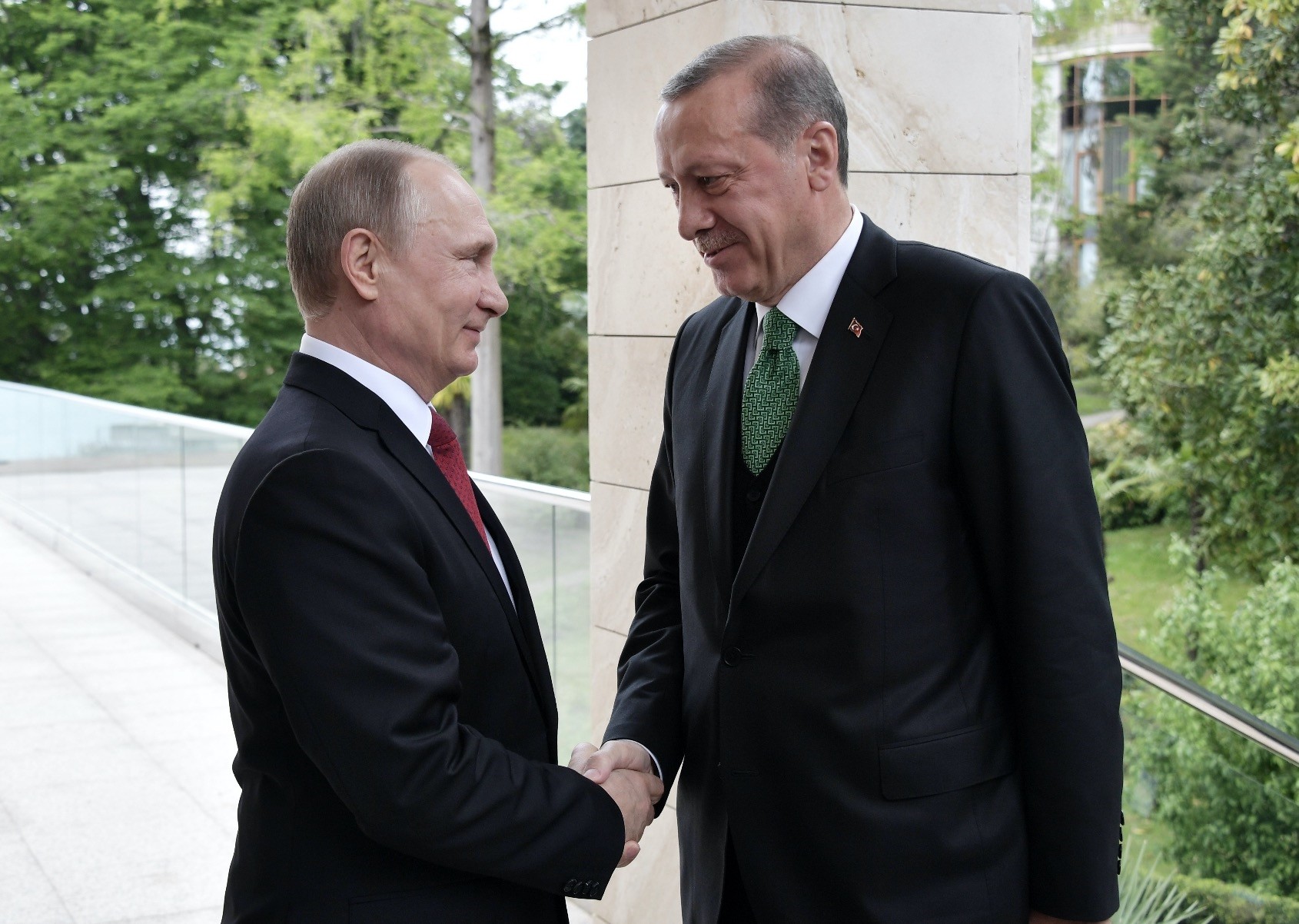 President Erdou011fan and Russian President Putin discussed the latest developments in war-torn Syria when they met in Ankara on Sept. 28.
by daily sabah
Nov 13, 2017 12:00 am

Recent regional developments, particularly cooperation on finding a political resolution to the Syrian crisis, Russia's invitation to the PYD to a Syria meeting, as well as economic and trade issues are expected to be discussed when Erdoğan and Putin meet in Sochi

President Recep Tayyip Erdoğan is expected to visit Sochi today to hold bilateral talks with Russian counterpart Vladimir Putin regarding the Syrian civil war and recent regional developments. The main issues expected to be on the agenda of the two leaders include the political transition period in Syria, efforts for setting up de-escalation zones in Idlib and Turkish-Russian economic relations, as well as Russia's invitation for the PKK terror organization's Syria affiliate, the Democratic Union Party (PYD), to attend the Syrian National Dialogue Congress.

Turkey, Russia and Iran had reached an agreement regarding a national dialogue conference that could ultimately bring peace to Syria, during peace talks on Syria held in Astana last month. In the wake of the decision, Russia initiated a peace congress to be held on Nov. 18 in Sochi, announcing that all opposition groups in Syria were invited to the congress as well as the PKK-linked PYD, which was strongly criticized by Ankara. As a result of Ankara's response, presidential spokesman İbrahim Kalın stated on Nov. 5 that "Although it is not certain yet, what Russia has told us is that the meeting has been postponed for now, and the PYD will not be invited."

Commenting on the issue, Eşref Yalınkılıçlı, freelance Eurasian analyst and journalist for TRT World, said that the PYD issue is perhaps the most contentious topic between Ankara and Moscow at the moment.

"If a solution is reached on the Syria civil war and the conflict ends, then the future of the PYD and how the group will be utilized by both the U.S. and Russia will become a new issue for the future of the country, as well as ties between both states and Turkey. If Ankara's security relations with the U.S. and NATO normalize, then Russia may use the PYD by 'speaking softly but carrying a big stick' against Turkey. By inviting the PYD to the Nov. 1 meeting, this is clearly what Russia is doing," Yalınkılıçlı said.

Emphasizing that the PYD's possible attendance of the congress would be unacceptable, Kalın stated that Turkey supports the attendance of Syrian Kurds who are not linked to the terrorist group.

Even though Turkey has issued stern warnings concerning the negative implications of PYD involvement in Syria, the terrorist group has managed to extend its control over nearly one-third of Syrian territory, receiving military support from Washington, which considers the group "effective" in the fight against Daesh. The PKK is considered a terror organization by the U.S., the EU and Turkey. Russia does not list the PKK as a terrorist organization.

In recent days, Turkey has also been signaling the possibility of an operation against Afrin, Syria, which is currently controlled by the PYD.

"We do not have the luxury to say 'go ahead' in the event that attacks or harassment originating from within the borders of the National Pact are aimed at our country. We have the responsibility to implement the necessary measures. This is what we did in Operation Euphrates Shield and what we are doing right now in Idlib and Afrin," the president said in Ankara during the Nov. 10 commemoration ceremony of the death of the founder of the Republic of Turkey, Mustafa Kemal Atatürk, referring to the set of decisions adopted by the Ottoman parliament in 1920 for peace conditions after the Ottoman empire's defeat at the end of World War I.

The YPG's ultimate aim is to establish autonomous cantons from northwestern Afrin to Kobani and Jazeera in the northeast. Moderate opposition groups oppose this, arguing that it would threaten Syria's territorial integrity, while Ankara objects to the YPG's aim, saying Turkey will not allow the establishment of a terror corridor along its southern borders.

"In case of an operation on Afrin by Turkey, the position of Russia and the U.S. will be crucial, as the opposing stance of these two countries could become a problem for Turkey's offensive on PYD-controlled Afrin," Yalınkılıçlı added.

Presidents Erdoğan and Putin had previously met in Ankara on Sept. 28 where they discussed developments in war-torn Syria. During a joint press conference, the two presidents highlighted significant efforts being implemented in setting up de-escalation zones in Syria, in the scope of decisions made at the Astana meeting. The guarantor countries of Turkey, Russia and Iran have sought to enhance cooperation for the resolution of conflicts.

Turkey's military began setting up observation posts in Idlib last month before establishing de-escalation zones to reduce clashes between the opposition groups and the regime. On May 4, the guarantor countries signed a deal in the Kazakh capital of Astana to establish de-escalation zones in Syria. The May 4 de-escalation zone agreement envisages the halt of hostilities between Bashar Assad regime forces and moderate opposition groups within the zones, as well as the creation of conditions for humanitarian access, medical assistance, the return of displaced civilians to their homes and the restoration of damaged infrastructure.

Following his meeting in Russia President Putin in Sochi, Erdoğan is expected to pay a visit to Kuwait on Nov. 14. Erdoğan will hold talks with Kuwait's Emir Sheikh Sabah Al-Ahmad Al-Jaber Al-Sabah. As Kuwait is a key mediator in the Gulf dispute, both leaders are expected to discuss the crisis as well as recent developments in Syria and Iraq.