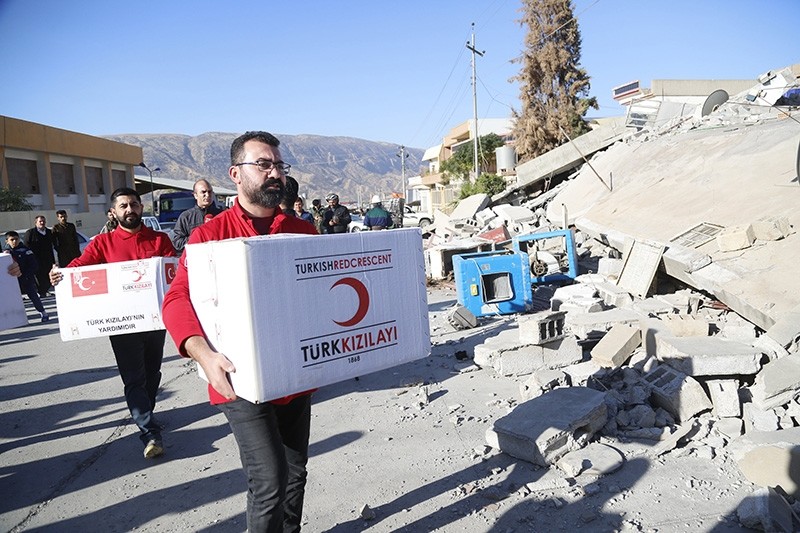 An official of the Turkish Red Crescent told Anadolu Agency in the northern Iraqi city of Erbil that a total of 18 trucks loaded with blankets, tents and food supplies had reached the city.

The humanitarian supplies were unloaded at a Turkish Red Crescent depot in the city where distribution would take place.

Another 14 of the aid agency's trucks also reached Sulaymaniyah, another quake-affected city in the region, the official said.

He added that more trucks were on their way from Turkey to Iraq.

A 7.3 magnitude earthquake struck the Iraq-Iran border region late Sunday, killing at least 432 in Iran and eight in Iraq, and leaving tens of thousands without shelter.

Earlier in the day, the Turkish Red Crescent's regional office in the eastern Turkish province of Erzurum announced it had sent nine trucks loaded with heating stoves, blankets and mattresses to quake victims.

"The trucks loaded with aid supplies, including 6,000 blankets, 900 heating stoves and 2,000 mattresses, have been sent to the quake-hit region," said Safak Lostar, the agency's head of the northeast Anatolian region.

Mehmet Akbas, project coordinator for the the Middle East region of Turkey's IHH Humanitarian Relief Foundation, told Anadolu Agency they had distributed food to 250 people in Sulaymaniyah on Tuesday.

He added that more IHH vehicles loaded with 500 tents had already crossed the Turkish-Iraqi border and were expected to reach the region Wednesday.

Turkey was the first country to react to supply aid to the quake-hit Kurdish-populated area, according to northern Iraq's Kurdish Regional Government (KRG).

Immediately after the the earthquake, Turkey sent a military cargo plane carrying aid and a search-and-rescue team to Iraq.

As a result of Sunday's 7.3-magnitude earthquake, Iran's state news agency IRNA reported Tuesday that the death toll had risen to at least 432 with 7,817 injured.

Iranian officials also announced that 536 villages were destroyed, 12,000 houses had collapsed and at least 70,000 people were left without homes.