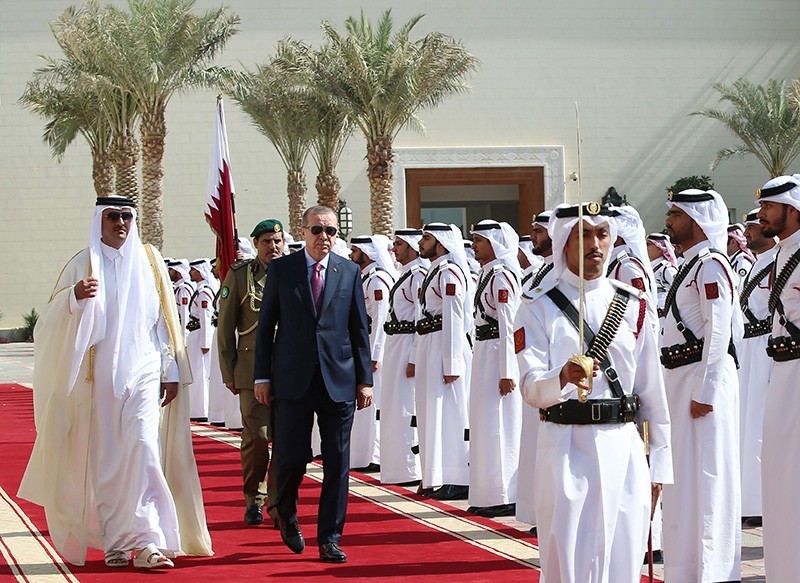 President Recep Tayyip Erdogan (C-L) being welcomed by Qatar's Emir Sheikh Tamim bin Hamad Al-Thani (L) as they review an honour guard upon his reception in the capital Doha. (AFP Photo)
by Anadolu Agency Nov 15, 2017 12:00 am

Erdoğan arrived in Qatar late Tuesday as part of his tour to Gulf states that began Monday with a visit to Kuwait.

The agreements included a memorandum of understanding on central banking, tourism and judicial education; a declaration of intention in the meteorological field; cooperation agreements on "friendly harbors" and "criminal subjects" as well as media, technology and humanitarian assistance issues.

The Qatari emir had given a warm welcome to the president and hosted him for an official reception at Emir-i Diwan government complex.

Turkey backs Qatar in the Gulf crisis that was triggered in June when Saudi Arabia, Egypt, the U.A.E. and Bahrain cut diplomatic and trade ties with Qatar.

The four states accuse Qatar of supporting terrorist groups -- the allegations Doha denies, describing the embargo as a breach of its national sovereignty.