Turkish troops in Qatar must conquer the hearts of the people, Erdoğan says 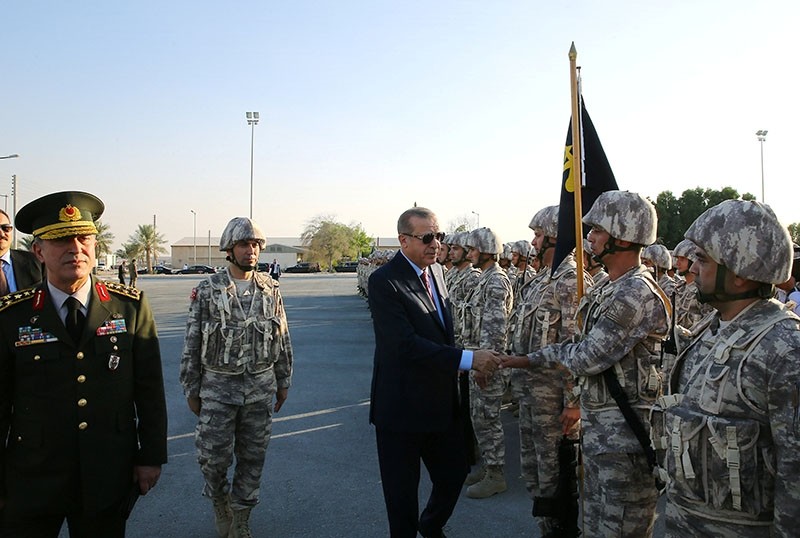 During President Recep Tayyip Erdoğan's visit to a Turkish military base in Qatar Wednesday, he urged the troops to conquer the hearts of the Qatari people.

"Our expectations from our heroes in Qatar; you must conquer the hearts of the people of Qatar with our love and respect while performing your military duty with your gun and your heart," Erdoğan told the soldiers.

He stated that Turkish troops are doing their duty to brothers in Qatar. "The only reason for your existence here is friendship, peace and trust."

"To be with our brothers and friends in difficult times is one of the greatest heritage that our ancestors have left us...Moreover, throughout history we do not hesitate to give this support whatever the cost," Erdoğan said.

"We have once again demonstrated our commitment in this regard by increasing our troops, which has existed in Qatar since 2015, to threefold after the last crisis," said the Turkish president referring to Ankara's support to Doha following the start of the Gulf crisis.

He stated that the most important difference that distinguishes a Turkish soldier from all other soldiers is "they never suspend their morality, conscience, the fear of God while performing the duty".

Doha and Ankara signed a defense agreement in 2014 under which Turkey established a base in the Gulf country at the request of the Qatari government.

Turkey's base in Qatar has 250 people, Erdoğan said last month.