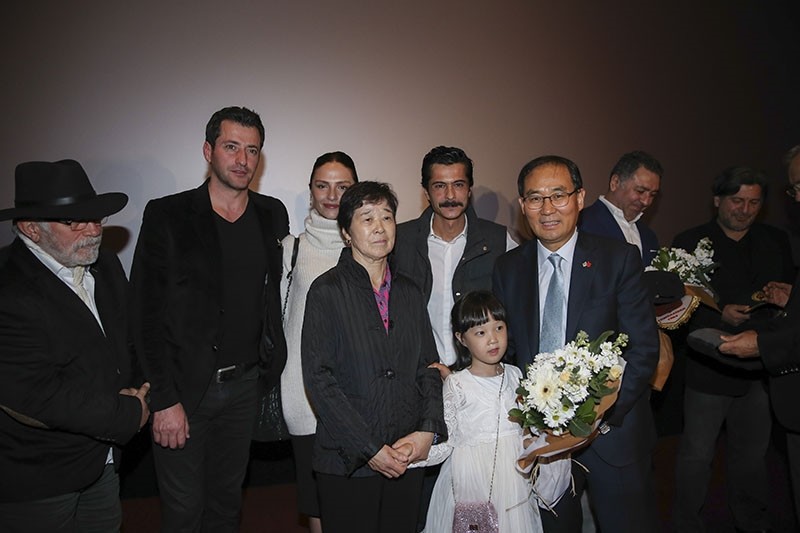 Turkey's newly appointed Ambassador to Seoul Ersin Erçin and Korean Ambassador Yunsoo Cho pointed to opportunities for further cooperation between Ankara and Seoul, which have historic brotherly ties, as Turkey and South Korea celebrate the 60th year of official ties between the two countries.

The Turkish and South Korean ambassadors attended the special screening of the movie "Ayla," a film that tells the true story of a Turkish soldier and an orphaned South Korean girl, on Nov. 18 along with the film's actors and actresses and many Turkish war veterans. The Turkish and Korean ambassadors highlighted that the movie has played a significant role in reminding the world of the historic ties that bond the two nations together.

"The release of such a movie in the 60th year of diplomatic ties between South Korea and Turkey is a great opportunity for remembering the shared feelings of those years. The Korean people have never forgotten that Turkey sent troops to the country thousands of kilometers away to fight in the Korean War in 1950," Ambassador Erçin told Daily Sabah.

Erçin, who has served as the director general for the Asian-Pacific in the Ministry of Foreign Affairs, said, "South Korea is a country that defines Turkey as its blood-brother and relations with the country have continued to develop significantly as Ankara seeks to forge a stronger partnership with Seoul."

Commenting on the ties between the countries, the South Korean envoy stressed: "Even though Turkey and South Korea are two separate countries, their relations have been improving, and there is room for further cooperation."

In addition to having strong, friendly ties, Seoul and Ankara have improved the scope of their relations across various fields. Erçin pointed out that South Korea is both a strategic partner of Turkey and a member of the informal partnership between Mexico, Indonesia, the Republic of South Korea, Turkey and Australia (MIKTA).

As South Korea is the world's 11th largest economy and Turkey's second biggest trade partner in the Asian-Pacific region, Erçin said that the potential for increasing trade volume is high and that to further enhance ties, a visit to South Korea is planned with the attendance of Prime Minister Binali Yıldırım in December. The Turkish envoy said there have been comprehensive efforts to increase investment from South Korea as well as to balance trade relations.

Cooperation in technology was also highlighted by both envoys. "As South Korea is one of the reliable countries in the field of technology, I emphasize the need for further cooperation in this field," Cho stated.

Stressing that South Korea is among the world's leading countries in the field of technology and innovation, Erçin said that Seoul has contributed to projects in Turkey such as the Eurasia Tunnel. The ambassador added that Turkey seeks cooperation in the transfer of these technologies to the country for further development.