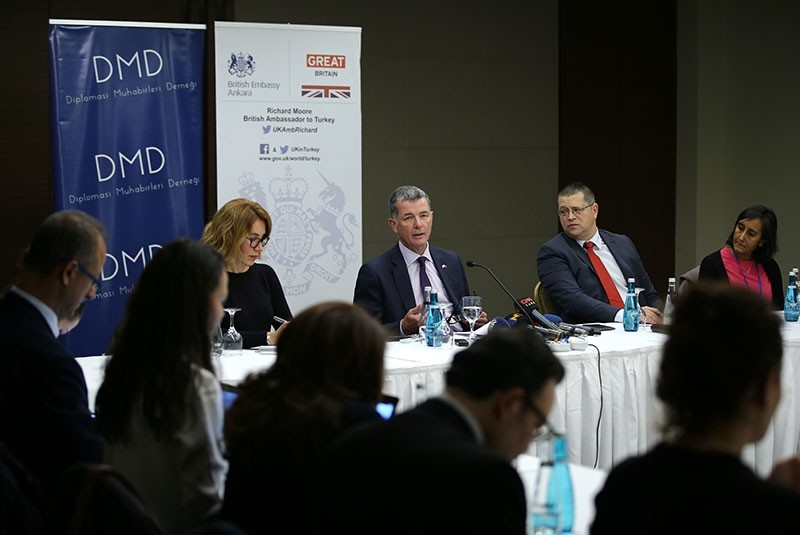 Britain's ambassador to Ankara Richard Moore has said that the U.S-led coalition against Daesh was aware of the evacuation of Daesh terrorists from Raqqa under a deal with the Syrian Democratic Forces (SDF), which is predominantly led by militants of the PKK's Syrian affiliate PYD's armed wing YPG.

"Certain local elements of the anti-Daesh coalition have been in contact with the SDF, and those people did know about the evacuation," Moore said in reference to the U.S. at a press conference held by the Diplomacy Correspondents Association (DMD) in Ankara.

On Nov. 12, the BBC reported that 4,000 Daesh terrorists, including hundreds of foreign fighters, had been evacuated from Raqqa as part of the agreement and dispersed in Syria.

The BBC report, revealing the details of the deal to arrange Daesh's evacuation, included interviews with drivers carrying the militants, Syrians observing the convoy and secret footage showing trucks loaded with armed men.

"I am not an expert on the story, but some of the fighters were foreign fighters," Moore said. "The U.K was not part of the deal. Some local elements on the ground made the decision against the wishes of the coalition."

Ankara was appalled by the U.S. Defense Department concerning the agreement struck between the SDF and Daesh terrorists. When asked whether the SDF's deal with Daesh also allowed Daesh fighters' families to flee Raqqa, Moore said initial reports indicated that the deal "wasn't for the families, it was for the fighters."

In late August, Bashar Assad's regime, backed by Russia, was involved in a similar evacuation deal with Daesh terrorists regarding their enclave on the border with Lebanon.

Under protests, monitoring and airstrikes by the U.S.-led coalition, it took more than 15 days for the evacuation convoy to reach the central city of Deir el-Zour.

Praising Turkey's efforts in the anti-Daesh coalition Moore said that "the U.K and Turkey have outstanding cooperation in counter-terrorism."

Regarding the recent incident that took place during a NATO drill in Norway in which President Recep Tayyip Erdoğan's name and a picture of Turkey's founder, Mustafa Kemal Atatürk, were used in an "enemy chart" on Nov. 16, Moore said it was disgraceful, but specified it was "the act of one of two individuals."

Citing the quick apology from NATO Secretary-General Jens Stoltenberg, he stressed that this incident should not be attributed to NATO. Moore dismissed suggestions that Turkey is withdrawing from NATO and the West as "absurd."

"However, there will be issues about integration with NATO system. But Turkey is aware of it," he added.

Moore also welcomed Turkey's engagement with Russia and Iran as part of efforts to find a solution to the Syrian civil war, calling dialogue between the three countries useful.

Moore is the 80th British ambassador to Ankara and is due to depart his post in the coming weeks.

Praising the current level of bilateral relations, he said, "Turkey will be an essential partner for my country, the U.K.," adding that he was "a bit sad" to be leaving Turkey.