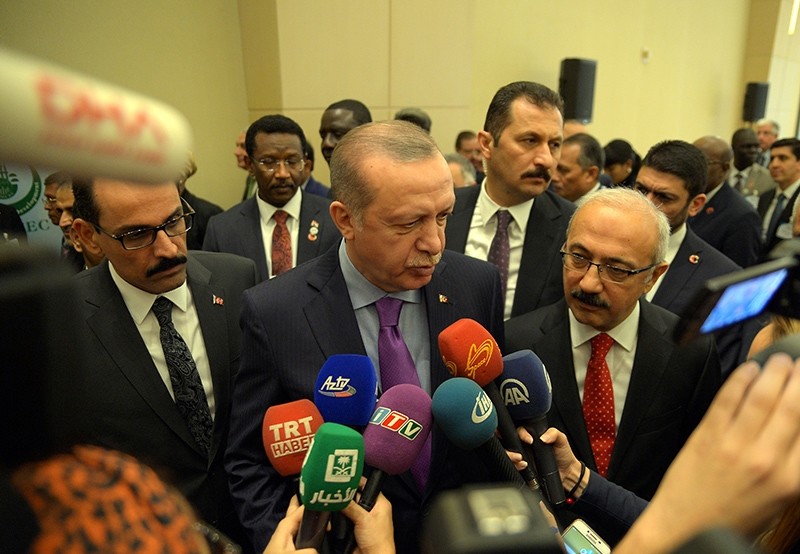 Russia has the power to solve the decades-long Nagorno-Karabakh dispute between Azerbaijan and Armenia, President Recep Tayyip Erdoğan said Wednesday.

"Russia, [Russian President Vladimir] Putin is a power that can solve this issue," Erdoğan told reporters on the sidelines of the economic meeting of the Organization of Islamic Cooperation (OIC) in Istanbul.

His comments came in response to a question on whether he was planning to bring up the issue during talks with Putin.

"I have already told [Putin] that I expect him to show sensitivity to this matter," Erdoğan said. "I will bring it up again if I find an opportunity to do so during the trilateral meeting today."

The president is scheduled to meet Putin and Iranian President Hassan Rouhani in Russian Black Sea coastal city of Sochi later Wednesday to discuss progress made in the Syrian peace talks in Astana as well as the changes in de-escalation zones across the war-torn country.

"Karabakh is our personal issue. We cannot leave it aside," Erdoğan added.

Occupied Karabakh is recognized as Azerbaijani territory by the international community but was taken over by Armenian secessionists as the Soviet Union broke up in the ealy 1990s.

Karabakh broke away from Azerbaijan in 1991 with Armenian military support, and a peace process has yet to be implemented.

Despite a 1994 peace deal, border skirmishes are a frequent occurrence. In April 2016, these escalated into the worst outbreak of fighting since the war, resulting in the deaths of more than 270 military personnel.

Last month, the presidents of Azerbaijan and Armenia agreed to reduce tension over occupied Karabakh and speed up talks to resolve the conflict.