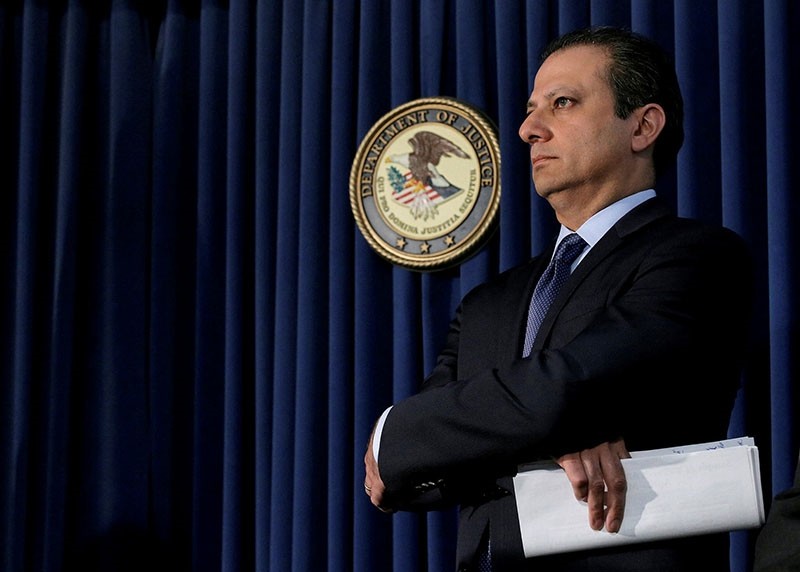 Preet Bharara, the former New York Southern District prosecutor who is accused by Turkish officials of using false evidence gathered by the Gülenist Terror Group (FETÖ) in the investigation on violating Iran sanctions, has been spreading the propaganda of the group while consistently denying ties.

In his latest support for the terrorist group on social media, Bharara retweeted a post by FETÖ-linked journalist Mahir Zeynalov claiming that the government in Turkey had arrested the wives of police chiefs who once launched corruption probes against government figures and Turkish-Iranian gold trader Reza Zarrab on Dec. 17 and 25. Zarrab is also one of the main figures of Bharara's investigation, which was overtaken by current prosecutor Joon H. Kim.

Zeynalov is an Azerbaijani journalist who was expelled from Turkey for falsely claiming that the government blocked prosecutors' arrest orders against terror groups. He was working for FETÖ's English language newspaper Today's Zaman, which was appointed trustees in March 2016, and shut down soon after the FETÖ coup attempt in July 15.

Although a former prosecutor, Bharara shared Zeynalov's claims without bothering to check whether the claims were true or not, while giving his verdict on the issue by labeling such acts as "cowardly" and "despicable."

Horrifying if this is true. Erdogan's jailing of wives of Turkish police chiefs is cowardly and despicable. Period. https://t.co/Z52WM0rEVd

While Zeynalov's tweet suggests that the suspects were arrested for being the wives of police chiefs that took part in the operation, the fact that there has been four years between the operations and arrest of related figures is sufficient enough to prove that the two issues are not directly related.

The suspects mentioned in Zeynalov's tweet were arrested in earlier in November for using the Bylock messaging application, which was solely used by FETÖ members and sympathizers until it was deciphered by Turkey's National Intelligence Organization (MİT) in investigations launched against the group after 2013.

Following the coup attempt, which had killed 250 people and injured 2,200 others, the use of the application was probed by Turkish authorities as a sign of membership to the terrorist group, which had managed to infiltrate into key state institutions through cheating, secrecy and a cult-like discipline.

The probes launched by FETÖ-linked prosecutors and police chiefs on Dec. 17 and 25, 2013 in the pretext of corruption were labeled as judicial coup attempts by the Turkish government as they were found to have used illegal wiretappings, falsified evidence and violating the hierarchy in state institutions.

However, in addition to their role in the Dec. 17 and 25, 2013, the same cadres were also accused of numerous sham investigations and trials targeting FETÖ's political opponents. Former Istanbul counter-terrorism police chief Ömer Köse, whose wife Semra Köse was arrested in November over Bylock use, was sentenced to prison for his role in the sham trial launched against a small group titled "Tahşiye." The Tahşiye group, a branch of the larger Nur Movement known for their opposition to the Gülen Movement and firmer stance against interfaith dialogue than other movements, was accused of having ties to al-Qaida by FETÖ-linked prosecutors, police chiefs and media. Köse was dismissed from duty in 2014 along with many other police chiefs for the illegal wiretapping of thousands of individuals including politicians, journalists, academics, NGO leaders and prominent figures through fabricated cases and court orders given by Gülenist-followers within state institutions.

Whereas former Istanbul financial police chief Yakup Saygılı, whose wife Esra Filiz Saygılı was also detained in a Bylock probe, is currently being probed as the FETÖ suspect who leaked the investigation files to the U.S. through Metin Topuz, an employee of the U.S. Istanbul Consulate General in Istanbul who sparked a diplomatic crisis between Turkey after being arrested. Saygılı is also facing charges as one of the key figures in the Dec. 17 and 25 operations.

The operations were coordinated by Zekeriya Öz, the former Istanbul chief public prosecutor who was one of the main figures behind all FETÖ-linked sham trials. The ties between Öz and Topuz are being investigated in the recent probe. The most important trial affiliated with Öz is the Ergenekon trial, in which hundreds of suspects including officers from the Turkish Armed Forces (TSK), politicians, journalists and academics were charged with plotting a coup against the government through fabricated evidence and had to spend years in prison before being acquitted of all charges. Along with the Sledgehammer (Balyoz) trial, this trial set the base for FETÖ to infiltrate into Turkey's strictly secular military and, assign its sympathizers to key positions, who turned their arms against Turkish people and the democratically elected government during the July 15 coup attempt.

In addition to his arguably poor and biased knowledge of the Dec. 17 and 25 trials and the figures behind the operations, Bharara is also accused of using the same summary of proceedings used by FETÖ-linked police during the Dec. 17 operation.

Meanwhile Richard Berman, the judge who is overseeing Zarrab's case, is also being accused of having direct links to FETÖ and has supported the terrorist group's rhetoric against Turkey.

Zarrab was arrested in Miami last year in March on charges of engaging in hundreds of millions of dollars of transactions on behalf of the government of Iran and other Iranian entities, which were barred by U.S. sanctions, while allegedly laundering the proceeds and defrauding several financial institutions by concealing the true nature of the illegal transactions.

U.S. prosecutors also charged former Economy Minister Zafer Çağlayan, who is also the former general manager of state-owned Halkbank, Süleyman Aslan and two others for conspiring to evade U.S. sanctions on Iran. Zarrab and Halkbank Deputy General Manager Mehmet Hakan Atilla, who was arrested while in the U.S. in March 2017, were scheduled to stand trial Nov. 27, but the trial is postponed to Dec. 4 on late Tuesday.

On Monday, Deputy Prime Minister Bekir Bozdağ raised questions about the methods U.S. authorities used to obtain the evidence, saying that the case in the U.S. is a replication of the Dec. 17 and 25 probes.

"Those conducting the trial are exerting pressure on the defendants. They are, in a way, held hostage," Bozdağ said.

"It is the Turkish nation's right to expect such a move within the framework of international and bilateral agreements between Turkey and the U.S." he added.