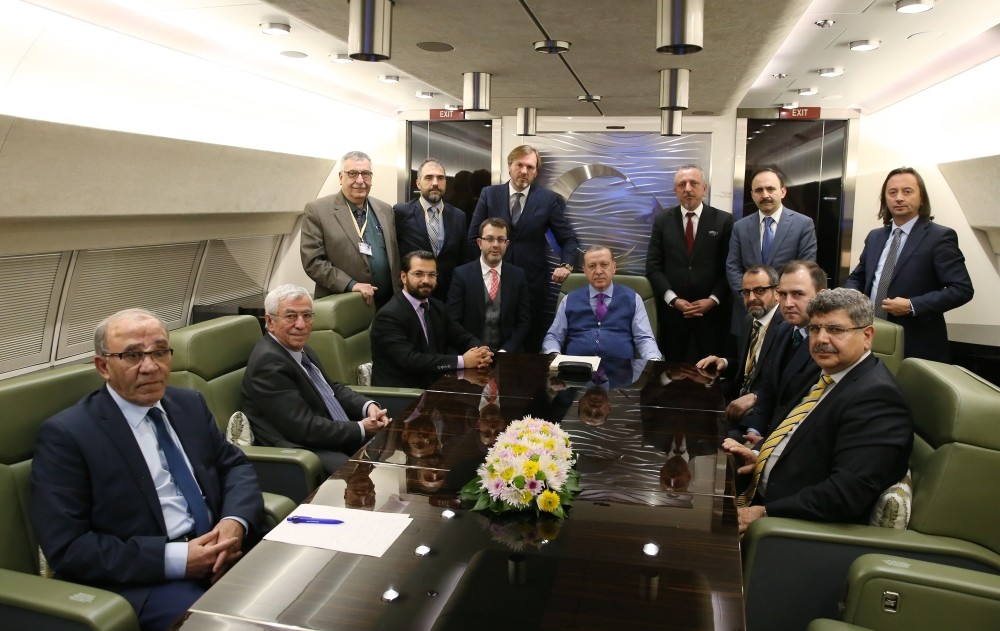 Erdou011fan said that Turkey's stance on terrorist groups like the PYD and YPG is fixed and he noted this both at the summit and at the press conference afterward.
by Erdal Şafak
Nov 24, 2017 12:00 am

President Erdoğan said Turkey, Iran and Russia have agreed to support a new and united Syria with a new constitution where free and transparent elections are held under U.N. auspices

President Recep Tayyip Erdoğan, speaking to reporters Thursday on his way back from Sochi, Russia, where he met with Russian and Iranian counterparts, Vladimir Putin and Hassan Rouhani, said the focus of the summit was a new charter for Syria and holding free and fair elections as soon as possible. He said the aim was to protect Syria's territorial integrity and allow a political solution to gain hold, and the Syrian National Dialogue Congress in Sochi announced late Wednesday that it would start the process.

The foreign ministers of the three countries will meet to organize the congress, he said, adding that chiefs of staff and intelligence officials would also be called to contribute to discussions when necessary. Future summits between the presidents of Turkey, Iran and Russia may take place in Istanbul, Ankara or Tehran, he said

All groups that constitute Syria will be invited to the congress, he said, specifying though that no terrorist group will be attending the meeting. "Our stance on terrorist groups like the PYD [Democratic Union Party] and YPG [People's Protection Units] is fixed. I noted this both at the summit and the press conference afterward."

The PYD and YPG are Syrian affiliates of the PKK, which is recognized as a terrorist organization by the U.S. and EU.

Erdoğan said that while Turkey, Russia and Iran were discussing ways to bring peace to Syria, the U.S. continued to deploy heavy weapons in the country. "We see them bringing armored vehicles, tanks and heavy weapons. The U.S. and coalition forces are handing these to the YPG. They gave the YPG 120 armored Hummers. Reports say these were deployed in Afrin." Afrin is on the border with Turkey.

Erdoğan said he may speak with U.S. President Donald Trump in the coming days. "Let's hear what they have to say about what they are doing. In Hamburg, they said they had recorded the registration numbers of all weapons given to the YPG and would be collecting them after Daesh was destroyed. Did they do so? Now, there is talk about a new U.S. base in Raqqa. Their 14th base. Five or six of them are air bases.

There was no way Turkey could accept the participation of the PYD in the Syrian peace process, Erdoğan said, repeating that Russia and Iran are aware of Turkey's position. He also said the Syrian Democratic Forces (SDF), seen as a guise used by the U.S. to utilize a group Ankara considers to be a terrorist group against Daesh, would not be invited to the congress, he affirmed.

Putin shared Turkey's concerns on the PYD and YPG, Erdoğan said. "The U.S. and the coalition are the only ones that don't share our concerns on the terrorist group. We want both Iran and Russia to stand with us against groups that constitute a threat to Turkey. This does not necessarily have to be military, but rather diplomatic support.

When asked about Putin's meeting with Syrian leader Bashar Assad a day before the Sochi summit, Erdoğan said the Russian president mentioned it, but there certainly would be matters he preferred not to share. "He said Assad is opposed to the PYD's participation in the peace process. Turkey has nothing against Kurds. We are opposed to terrorist groups."

When asked if Turkey and the Assad regime could cooperate against the PYD and YPG, Erdoğan said that in politics, it would not be proper to reject all options out of hand. However, he also dismissed any suggestion that there is now indirect dialogue between Ankara and Damascus.

Turkey expressed its desire for free elections in Syria at the summit, Erdoğan said. "Clearing landmines, freeing prisoners and allowing access to humanitarian aid are some confidence-boosting measures considered during this process.

Erdoğan also said Turkey had already built three of the 12 observation posts it promised in Idlib to keep the peace and similar measures would continue.

When asked if there is a deadline set for peace in Syria, he said such a forecast is impossible to make, but argued that the current state of affairs is unacceptable for all concerned.

If the U.S. wants to join the process sometime in the future, the three original guarantor powers would decide whether to accept it or not, he said.