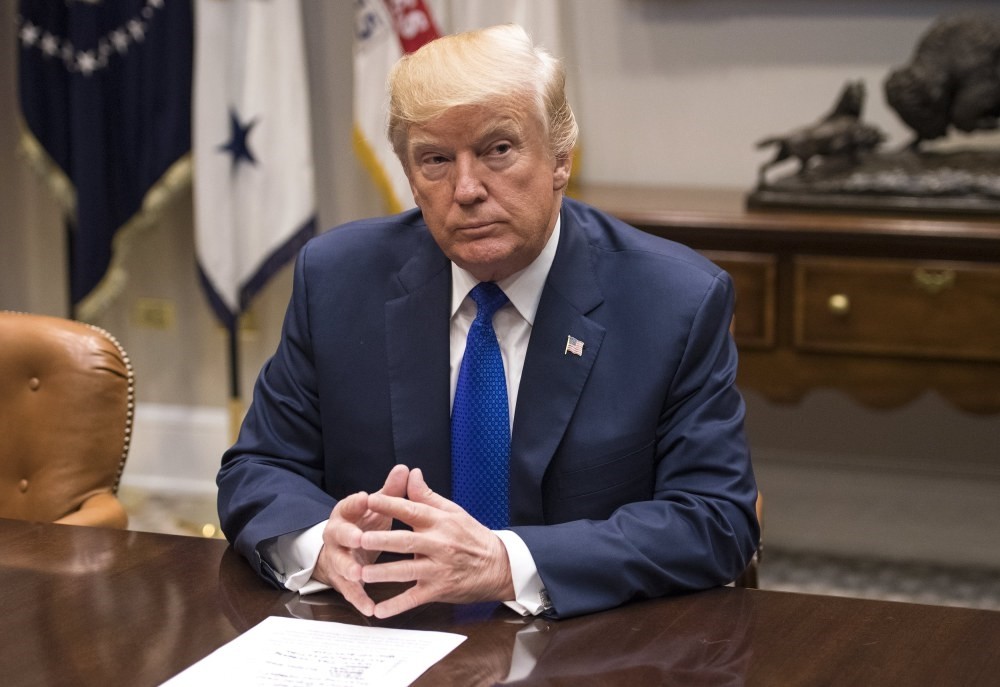 The contradiction between statements from President Trump and the Pentagon on arms suplies to the YPG, the PKK's Syrian wing, is raising concerns in Turkey as Ankara argues the weapons given to the terrorist group pose a security threat

As if more proof was needed to portray the confusion and inconsistencies within and between the three pillars of U.S. foreign policy - the White House, Pentagon and Department of State - it was reported Thursday that Rex Tillerson will be replaced by CIA Director Mike Pompeo. Meanwhile the Pentagon and U.S. President Donald Trump's conflicting remarks on providing military support to the Democratic Union Party's (PYD) armed People's Protection Units (YPG) in Syria raises concerns for Ankara, Foreign Minister Mevlüt Çavuşoğlu said Thursday. "U.S. President Trump told our president [Recep Tayyip Erdoğan] on the phone that from now on no arms will be given to the YPG," Çavuşoğlu said.

"We do not interfere in the U.S.'s internal affairs, but if the Pentagon is not listening to its own president, then it ultimately concerns us because the weapons given to them are a threat to us." In a telephone conversation with Erdoğan last Friday, Trump promised to halt arms supplies to the YPG, the militia of the Syrian branch of the PKK, which has waged a bloody campaign against the Turkish state since 1984, and is listed as a terrorist organization by the U.S., EU and Turkey. However, the Pentagon later said the U.S. was merely "reviewing pending adjustments to the military support provided to our Kurdish partners." Spokesman Eric Pahon said the U.S. would "continue our partnership with the Syrian Democratic Forces [SDF]," referring to the Syrian group predominantly led by YPG terrorists.

On Tuesday, however, the Pentagon said it plans to retrieve heavy weapons from the SDF in Syria since the Daesh terrorist group has essentially been eliminated.

"It is our intent to regain large vehicles and heavy or crew-served weapons once specific threats have been defeated," Pentagon spokesman Col. Rob Manning said in a written statement.

Trump had announced last May that the U.S. would start supplying weapons to the YPG, despite Turkey's protests, as the anti-Daesh coalition prepared to seize Raqqa.

Çavuşoğlu said what Trump said should be heeded. "Turkey gives great importance to this," he said. "We keep every promise we make." Çavuşoğlu was speaking at a news conference with the foreign ministers of Azerbaijan and Pakistan in the Azerbaijani capital of Baku.

The ambiguous and contradictory remarks from U.S. foreign policy makers have become a matter of concern for Ankara, which sees U.S. arms support for the YPG as an issue threatening its national security. Ankara argues that military support to the YPG is ultimately transferred to PKK terrorists and used against Turkey.

Speaking to Daily Sabah, Nurşin Ateşoğlu Güney, dean of the Economic, Administrative and Social Sciences Faculty at Bahceşehir Cyprus University, and a professor of political science and international relations, said the contradictions between the Pentagon and Trump are caused by the fact that many military officials shaping Syria policy are still figures appointed by former U.S. President Barack Obama.

"Trump is deemed to be an ineffective president at home and there is a political division within the U.S. administration, affecting the steps taken. This has a negative effect not only in relations with Turkey, but it also affects global politics, as well," Güney said.

In a separate statement released yesterday, the Turkish Foreign Ministry also said that the U.S. sharing information on the weapons provided to the YPG is "not sufficient" and that Ankara expects clarity from the U.S. administration on when the support to the group will end.

Güney added that Obama appointees in the Pentagon and the Defense Department are still strongly effective in shaping Syria policy. "However, the fact that Trump had a phone call with Erdoğan is noteworthy, and I think this is a result of the Sochi meeting between Russia, Turkey, and Iran," Güney said. She said the U.S. does not want to be sidelined completely and wants to remain in the equation.

Government spokesman, Deputy Prime Minister Bekir Bozdağ, said in a televised interview with Anadolu Agency (AA) that Ankara would monitor the process regarding the issue as Turkey was promised that Washington would not provide weapons to the YPG anymore.

"We should see the reflection of [Trump's] promise on the ground. Mr. Trump made this statement, and of course, we will follow it up in the field to see whether he provides weapons or not from now on."

On Nov. 24, Çavuşoğlu had said that Trump "clearly" stated that the U.S would not deliver weapons to the YPG anymore.

The Pentagon had issued a statement after the phone conversation between Erdoğan and Trump, which said: "The weapons provided to the Syrian Democratic Forces, to include its Kurdish elements, would be limited, mission-specific and provided incrementally to achieve military objectives."

"We speak to Mr. Trump, and Trump speaks to the Pentagon. The Pentagon is not our direct addressee," Bozdağ said.

Prime Minister Binali Yıldırım also said earlier in the week that Trump's word on the YPG is binding, not other actors' in the U.S.

Trump was the first person to say that providing weapons to the YPG was wrong, he added, "We see these as positive developments."

Erdoğan said on Tuesday he would talk to Trump again in the coming days.

If threatened, Turkey will enter Afrin without hesitation

Foreign Minister Mevlüt Çavuşoğlu made clear on Thursday that if Turkey is felt threatened in anyway, it will not hesitate to enter into Afrin.

The north Syrian city is currently under the control of groups affiliated with the PKK, which is listed as a terrorist organization by Turkey, the EU, and the U.S.

The PKK terrorist group's Syrian offshoot, the Democratic Union Party (PYD) and its armed wing the People's Protection Units (YPG) has been in control of Afrin since 2012. The city is now considered one of the major strongholds of the PKK.

"If Turkey faces any threats coming from Afrin or any other region, we will enter that area without any hesitation and rid it of terrorists," the foreign minister said.

He further added that Turkey could carry out operations similar the Operation Euphrates Shield, which was launched on Aug. 24, 2016, to drive Daesh away from Turkey's border after the terrorist group's presence threatened safety and security in southern provinces, including Kilis, Gaziantep, and Şanlıurfa.

"As the president [Recep Tayyip Erdoğan] has said, we would enter unexpectedly in one night," Çavuşoğlu said.

PYD terrorists in Afrin have occasionally carried out cross-border attacks against the Turkish military, despite the presence of American and Russian representatives and military experts in the area.

Bozdağ said any humanitarian or terror-related development in northern Syria directly affects Turkey's national security. He added that the country will take all necessary measures to eliminate any threats that could emerge from that area, establish a political solution and internal peace in Syria, and also block the possibility of terror groups crossing into Turkey to carry out attacks in the country.

"We have always said we will not turn a blind eye to the presence of the PKK-affiliated PYD/YPG's presence in Afrin and the threat they pose against Turkey," the deputy prime minister said, adding that Turkey will retaliate if there were any cross-border attacks.

He said Afrin was a top issue on Turkey's agenda and that Ankara has communicated its position on the PYD/YPG in Afrin with the U.S., Russia, and Iran.

During the meeting, the three leaders agreed to convene a congress of Syrian groups to advance a political solution for the war-torn country.