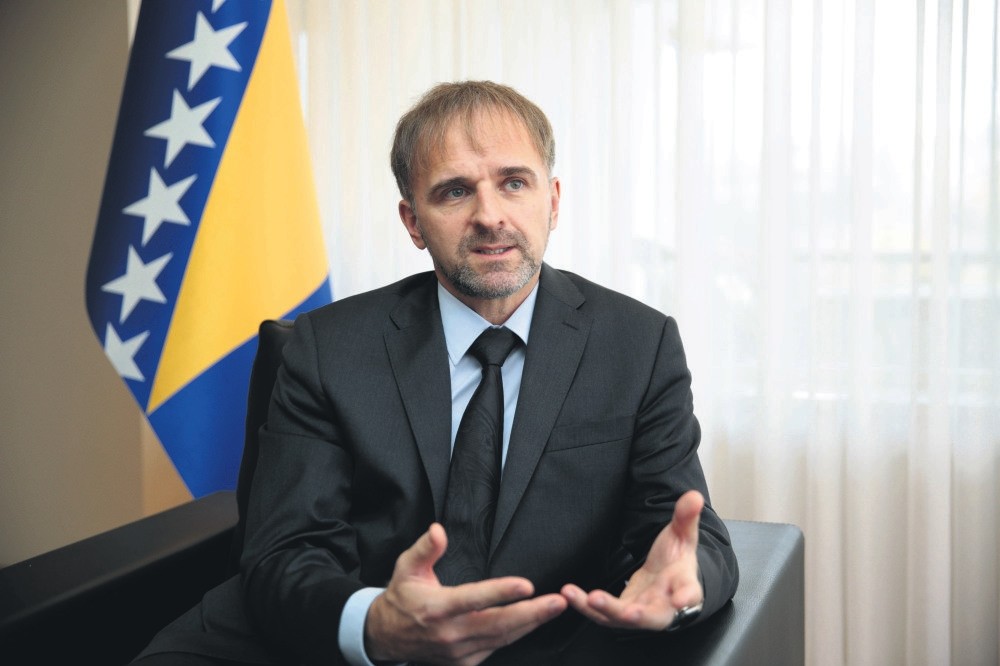 Ambassador Sadovic said that last year Turkey was among the top-10 biggest investors in Bosnia-Herzegovina.
by Özgenur Sevinç Dec 02, 2017 12:00 am

Bosnia's ambassador to Ankara Bakir Sadovic told to Daily Sabah in an exclusive interview that the two countries have excellent political, cultural and growing economic ties, adding that Ankara's inclusive role for all ethnic groups in the Western Balkans shows its significance in the region

Bosnia-Herzegovina's ambassador to Ankara, Bakir Sadovic, welcomed Turkey's role in the Balkans, stressing that all of the countries in the region consider Turkey a friend, which gives hope for building a better future.

Underlining Turkey's efforts to contribute to the reconciliation process in the region, Sadovic told Daily Sabah: "Turkey plays an important role in the Western Balkans and gives us hope for the future because it's not supporting one ethnic group but supporting all of the countries in the region."

As Turkey and Bosnia-Herzegovina continue to enjoy strong bilateral relations, the ambassador said that the two countries "have excellent political, cultural and growing economic ties that can be additionally improved."

Sadovic said Turkey has taken important steps for enhancing dialogue between the countries in the region, including Bosnia-Herzegovina, Serbia and Croatia. Commenting on the recent conviction of former Bosnian Serb military commander Ratko Mladic of genocide and crimes against humanity by the U.N. Criminal Tribunal for the Former Yugoslavia (ICTY), the ambassador said: "The decision is welcome, but unfortunately the victims and Bosnians have waited for this judgement for too long." He said that following the ICTY ruling, the countries in the region can now finally move on.

"We hope that investments from Turkey will come to the Balkans to help open a new chapter for economic prosperity and contribute to improving the quality of life in the region," Sadovic said. He added that visits from Turkey's highest state officials, as well as by companies interested in business investments, are welcome in Bosnia-Herzegovina as well as the region as a whole.

Sadovic also commented on Turkey's efforts in providing aid to Syrian refugees, saying that it is touching that "Turkish people opened their homes to the Syrian refugees." Sadovic said: "During the years of war, Bosnians felt deserted," and that the support given to refugees means a lot to them. He said his country will also provide aid to the Syrian refugees in an effort to show that they have not been forgotten.

As part of Turkey's efforts to contribute to development in the region, the Turkish Cooperation and Coordination Agency (TİKA) has been conducting various projects in Bosnia-Herzegovina. Underlining that for many years, TİKA has renovated cultural and historical monuments in Bosnia-Herzegovina and helped in the restoration of infrastructure, Sadovic said the newest TİKA programs are in agriculture. "Many projects aimed at helping farmers in the rural regions of our country contribute to the growth of agricultural and livestock capacities, as well as the sustainability of our local industries," Sadovic said, and added: "Helping to strengthen farms in Bosnia-Herzegovina is a step in the right direction, and I hope that TİKA will continue with this in the future."

Touching on the economic ties between Turkey and Bosnia-Herzegovina, Sadovic said: "The leaders of our two countries have set a goal to increase trade to $1 billion, which is challenging but achievable. The Turkish economy endures despite negative and tragic events in its environment and that encourages us to increase our efforts to strengthen economic ties between our two friendly countries."

Sadovic pointed out that last year Turkey placed 10th on the list of the biggest investors in Bosnia-Herzegovina. He said that there is room for further improvement and added, "Negotiations are under way between the Turkish Economy Ministry, the Turkish Ministry of Foreign Trade and Economic Relationships of Bosnia-Herzegovina to adjust the free trade agreement between the two countries." He said: "I hope that the change in the agreement will provide additional opportunities to deepen and expand the cooperation between our two countries, especially in the field of agriculture and livestock."

As Turkey continues its international fight against the Gülenist Terror Group (FETÖ), which orchestrated a failed coup attempt last year, Sadovic said: "The agencies and ministries in Bosnia-Herzegovina and Turkey tasked with the prevention and fight against terrorism are cooperating fully."

"In the name of the Bosnian-Herzegovinian presidency, President Bakir Izetbegovic was one of the first to strongly condemn last year's coup attempt and gave his full support to the democratically elected leadership of the Republic of Turkey," Sadovic said.

Referring to a Turkish TV series that tells the life story of Bosnian leader Alija Izetbegovic, the ambassador welcomed the project: "I had the honor of closely cooperating with the late President Alija Izetbegovic as his personal secretary from 1994 to 2000, and I was able to personally witness his wisdom, persistence and strength in finding solutions to seemingly hopeless situations."

Citing that Izetbegovic is also respected all over Turkey, Sadovic said: "He was and still is the bridge that joins our people and countries. He has earned the right to be remembered with respect for his endeavors, lifetime work and achievements."