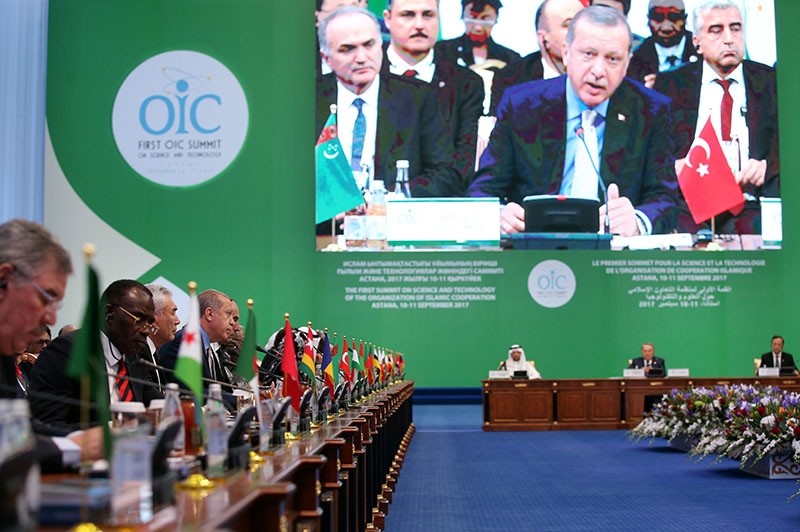 President Erdoğan has invited leaders of Organization of Islamic Cooperation (OIC) member states to convene for an extraordinary leaders summit in Istanbul on Wednesday, Dec. 13 over the issue of Jerusalem, Presidential Spokesperson İbrahim Kalın said Wednesday.

Speaking at a news conference in Ankara, Kalın said that Erdoğan has called on OIC member states to come together to display joint action and coordination among Muslim countries.

"Jerusalem is our honor, our common cause, and as Mr. President said yesterday, it is our red line," Kalın told reporters, noting that Erdoğan has discussed the matter with Palestinian President Mahmoud Abbas and leaders of other Muslim countries, including Malaysia, Tunisia, Iran, Qatar, Saudi Arabia, Pakistan, and Indonesia.

Kalın stressed that it would be a terrible mistake to change the status quo in Jerusalem, saying, "It would be a grave mistake for Jerusalem to be declared as the capital of Israel in terms of its historical, religious and legal status."

"Apart from the historical, religious and legal considerations it is true that there are steps to be taken in regard to the preservation of Jerusalem's current status quo and in order to prevent the mistaking of perceiving it as Israel's property," Kalın said, adding that the Turkish government calls on the Trump administration to immediately turn back from this mistake in such an already fragile region.

Prime Minister Binali Yıldırım said yesterday the U.S. plan for Jerusalem is "unlawful." Speaking at a joint press conference in Seoul with his South Korean counterpart Lee Nak-Yeon, Yıldırım said, "One way or another, both situations will be unlawful decisions and will make the existing problems in the region even more unsolvable."

President Erdoğan has held numerous phone calls ahead of the announcement of the decision, discussing the matter with world leaders, including Palestinian President Mahmoud Abbas, the heads of the governments of Malaysia, Tunisia, Iran, Qatar, Saudi Arabia, Pakistan, and Indonesia as of Wednesday.

Speaking in Brussels, Foreign Minister Mevlüt Çavuşğlu told journalists the move would "bring chaos to the region instead of stability and peace."

Çavuşoğlu, who spoke ahead of his meeting with U.S. Secretary of State Rex Tillerson on the sidelines of a NATO foreign ministers meeting, added: "Not only the Muslim world, but the whole world stands against this.

"I have spoken to U.S. Secretary of State Tillerson before [about this issue] and I will discuss it again when I meet him."

"It will pave the way for great turmoil, crisis, chaos and conflict in the region and foreshadows unseen negatives. In short, the declaration of Jerusalem as the capital will be a great disaster for all of us and everyone."

Speaking to Anadolu Agency (AA), Hasan Turan, the head of parliament's Turkey-Palestine parliamentary friendship group, called the decision by U.S. President Donald Trump "unacceptable." "This is just a decision by the Knesset with absolutely no legitimacy," said Turan, who is also an Istanbul deputy for the ruling Justice and Development Party (AK Party).

Erdal Aksünger, deputy chair of the main opposition Republican People's Party (CHP), called on the government to urge the U.S. against the move, using both diplomacy and "backdoor diplomacy."

"In Palestine's fight for freedom, in the determination of Palestinians' own destiny, and toward the international recognition of Palestine, the CHP will give endless support." CHP leader Kemal Kırıkçoğlu had also criticized the issue on Tuesday, saying the CHP stands by the Palestinian cause.

The opposition Nationalist Movement Party (MHP) slammed the possibility of the decision, saying it is a "ticking bomb that will serve to destroy the Middle East from A to Z."

Speaking to journalists in parliament yesterday, Peoples' Democratic Party (HDP) Diyarbakır Deputy Altan Tan also criticized the U.S. move. "The U.S. shouldn't play with fire," he said. Tan called on Israel to end its occupation of Jerusalem to instead give the city a status under which "members of the three main religions can easily express themselves." I

Turkey has strongly reacted against the decision and warned the U.S., while President Erdoğan said the country could cut diplomatic relations with Israel.