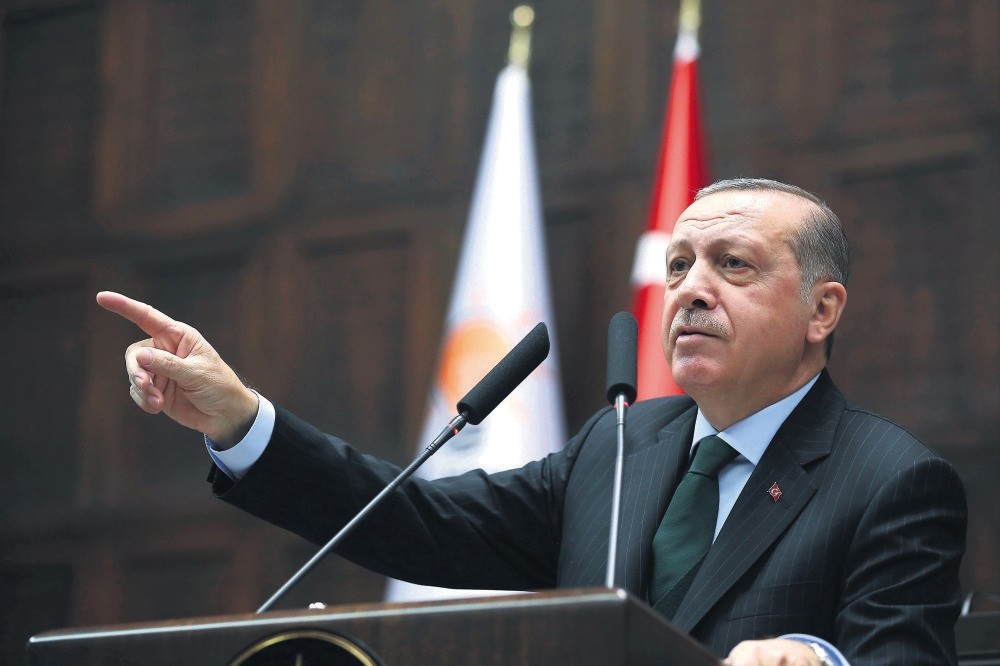 President Erdoğan urged the Trump administration to revisit the possibility of going ahead with a decision to relocate the U.S. Embassy in Tel Aviv to Jerusalem, as it may deepen the already existing Israel-Palestine conflict in the region, castigating the move, which controversial move has also received wide criticism from the international community

President Recep Tayyip Erdoğan criticized Tuesday a possible White House-decision to relocate the U.S. Embassy from Tel Aviv to Jerusalem and recognize the city as the Israeli capital, saying that Jerusalem is a "red line" for all Muslims, and that Turkey could go as far as severing all diplomatic ties with Israel if the U.S. moved ahead with the decision. "I want to express once again my sadness about the news that the U.S. is preparing to recognize Jerusalem as Israel's capital. Jerusalem, Mr. Trump, is a red line for Muslims," Erdoğan said and suggested that Turkey could even sever all diplomatic ties with Israel.

"If this goes too far we may cut off diplomatic relations with Israel. We once again warn the U.S. against a decision that would only deepen the problems in the region," he added. Erdoğan stressed that the decision would come as a heavy blow amid the human rights violations and oppression in the region. He said Turkey will follow the developments until the very end as the term president of the Organization of Islamic Cooperation (OIC). "If such a step is to be taken, we will gather the OIC leaders in Istanbul within five to 10 days."

Underscoring that this was no ordinary development, the president said, "We will certainly continue our struggle here until the very last moment."

U.S. policy for decades has been to reserve judgment on both claims until the parties agree on Jerusalem's status in a settlement of the Israeli-Palestinian conflict. However, as part of his election campaign, U.S. President Donald Trump pledged to relocate the country's embassy in Israel from Tel Aviv to Jerusalem.

While Israel considers Jerusalem its capital, the world opposes this, saying that the city's status should be determined in peace talks with Palestinians, who consider the eastern part of the city as their future capital.

The sensitivity of the Jerusalem site comes from the fact that it is to Jews known as the Temple Mount and to Muslims as Haram al-Sharif (Noble Sanctuary). The site includes the al-Aqsa Mosque, the third-holiest site in Islam, and the golden Dome of the Rock. It was also the site of an ancient Jewish temple, the holiest place in Judaism.

Israel began occupying East Jerusalem, which includes the holy area, during a 1967 war. However, the Waqf, a Muslim religious body, manages the Islamic sites within the compound.

Turkish Foreign Minister Mevlüt Çavuşoğlu said yesterday that moving the U.S. embassy to Jerusalem would bring chaos instead of peace to the region.

In the case of approval, "the peace process would be fully halted and such a step, first of all, is against international law and international treaties," Çavuşoğlu said during an event in Albania's Tirana.

Presidential Spokesperson İbrahim Kalın said yesterday that the U.S. move to recognize Jerusalem as Israel's capital was extremely alarming. He noted that such a decision would contradict international agreements and United Nations resolutions.

In a series of messages on his official Twitter account, Kalın said the decision was also against Jerusalem's historical and religious status. He highlighted that such a step would completely destroy the already fragile peace process in the Middle East and create new tensions and conflict.

"We hope that the U.S. administration does not make this calamitous mistake," Kalın said, adding that the protection of Jerusalem and the Haram al-Sharif was critical.

"Jerusalem is the keystone of the Middle East," Kemal Kılıçdaroğlu told a rally in the capital Ankara marking Women's Rights Day.

"If they [the U.S] make a wrong decision on Jerusalem, it will lead to more blood and tears in the Middle East," he added.

Kılıçdaroğlu also voiced his support for Turkey's "Palestinian brothers," saying, "no one can stop our support for them," he said.

Meanwhile, Israeli officials noted yesterday that Jerusalem has been the "capital of the Jewish people for 3,000 years and Israel's capital for 70 years, regardless of whether Erdoğan recognizes this or not."

They spoke on condition of anonymity because the government has not yet commented formally.

U.S. President Donald Trump's keenly awaited decision on whether to move the U.S. embassy in Israel from Tel Aviv to Jerusalem will not arrive by the Monday deadline, the White House said on Monday.

The formal deadline for the waiver was Dec. 1, however since that date coincided with a Friday this year, it was extended to Dec. 4. "The president has been clear on this issue from the get-go: It's not a matter of if, it's a matter of when," said White House spokesman Hogan Gidley hours before the administration's decision was due.

Trump was theoretically due Monday to decide whether to sign a legal waiver delaying by six months plans to move the U.S. embassy to Jerusalem, as successive administrations have done at regular intervals for more than two decades.

"No action though will be taken on the waiver today and we will declare a decision on the waiver in the coming days," Gidley said. Media reports had claimed that Trump would be announcing his decision today. American officials have said Trump may recognize Jerusalem as Israel's capital this week.

Without the waiver, by law, the embassy is supposed to move to Jerusalem. The White House said Monday that Trump was still deciding.

The implications of missing the deadline are unclear. Lawyers have said there's some flexibility in the exact timing. Congress could withhold State Department funding for overseas facilities but is unlikely to do so. The Trump administration has blown through many other congressional deadlines without consequence in the past.

US officials, world react to possibility of Trump relocating US Embassy

The possibility that the Trump administration may recognize Jerusalem as Israel's capital has stirred opposition from both U.S. and foreign officials who fear it could unleash violence.

Such a decision, which U.S. officials have said has not been finalized, would violate decades of U.S. policy of refusing to take a stance on the fate of Jerusalem, where it is held on that Israelis and Palestinians should negotiate and decide the issue.

A senior U.S. official told Reuters last week that Trump was likely to make the announcement on Jerusalem's being Israel's capital on Wednesday, though his adviser and son-in-law Jared Kushner on Sunday said no final decision had been made.

Kushner is leading Trump's efforts to restart the long-stalled Israeli-Palestinian peace talks, efforts that so far have shown little progress.

Trump is expected to sign the waiver, according to several U.S. officials. One U.S. official said Trump was likely to accompany the signing with an order for his aides to begin planning for an eventual embassy move, though it was unclear whether he would establish a strict timetable.

Two other U.S. officials said on condition of anonymity that news of the plan to recognize Jerusalem as Israel's capital had kicked up resistance from the State Department's Near Eastern Affairs bureau (NEA), which deals with the region.

"Senior [officials] in the NEA and a number of ambassadors from the region expressed their deep concern about doing this," said one official, saying that the concerns focused on "security."

The State Department referred questions to the White House, which did not immediately respond to requests for comment about the concerns of U.S. and foreign officials about the possibility of recognizing Jerusalem as Israel's capital.

A fourth U.S. official said the consensus the U.S. intelligence estimates on the U.S. recognition of Jerusalem as Israel's capital was that it would risk triggering a backlash against Israel, and also potentially against U.S. interests in the Middle East.

A fifth U.S. official said concerns of Palestinian and other Arab leaders about endorsing Israel's claim to Jerusalem were being taken into account but no final decisions had been made.

Daniel Benjamin, a former U.S. counterterrorism official now at Dartmouth University, had a simple message: "This is playing with fire."

The EU: The EU yesterday said a possible U.S. announcement on the status of Jerusalem "would undermine" peace efforts.

"The European Union was clear in its expectation that there should be reflection on the consequences that any decision or unilateral action affecting Jerusalem's status could have."

"It might have serious repercussions on public opinion in large parts of the world," Mogherini said.

She also said the focus "should therefore remain on the efforts to restart the peace process and avoid any action that would undermine such efforts."

Saudi Arabia: Riyadh has expressed hope the U.S. would not recognize Jerusalem as the capital of Israel and warned such a decision would have serious implications, state news agency SPA reported yesterday.

"The United States administration should take into account the negative implications of such a move and the Kingdom's hope is that they do not to take such a decision as this will affect U.S. ability to continue its attempt of reaching a just solution for the Palestinian cause," SPA said, quoting an unnamed official source at the Saudi Foreign Ministry.

On Monday, Saudi Arabia's Ambassador in Washington Prince Khalid bin Salman said any U.S. announcement on the status of Jerusalem before a final settlement is reached in the Israeli-Palestinian conflict would hurt the peace process and heighten regional tensions.

"The kingdom's policy, has been, and remains in support of the Palestinian people, and this has been communicated to the U.S. administration," Prince Khalid said in a statement.

Egypt: Al-Azhar, the highest seat of learning in the Sunni Muslim world, has warned against U.S. plans to relocate the U.S. embassy to Jerusalem and officially recognize the holy city as Israel's capital.

In a statement yesterday, the Cairo-based institution said the potential U.S. move would constitute "a threat to world peace." Such a move "would fuel sentiments of anger among Muslims, threaten world peace and deepen tension, division and hatred in the world," it warned.

France: French President Emmanuel Macron "expressed his concern over the possibility that the United States would unilaterally recognize Jerusalem as the capital of Israel" during a phone call with Trump Monday, Macron's office said after the two leaders spoke by telephone.

Jordan: In an unusually detailed statement published by Jordan's official news agency Petra, Jordanian Foreign Minister Ayman Safadi was quoted as having warned U.S. Secretary of State Rex Tillerson against the move in a call Sunday.

Safadi said such a move would "trigger anger across the Arab and Muslim world, fuel tension and jeopardize peace efforts," Petra reported.

Palestinian leaders: The Palestine Liberation Organization's chief representative in Washington, Husam Zomlot, said a formal U.S. recognition of Jerusalem as the capital of Israel would be the "kiss of death" to the two-state solution of the Israeli-Palestinian conflict.

"Should such a step be taken it would have catastrophic consequences," Zomlot told Reuters.

Abbas' aide Majdi Khaldi said yesterday the U.S. would lose credibility as a Middle East mediator if Trump goes ahead with the move.

Arab League: The chief of the Arab League is warning the U.S. not to take any measures that would change Jerusalem's current legal and political status.

Aboul-Gheit said the possible U.S. decision would be a "dangerous measure that would have repercussions" across the entire Middle East region.