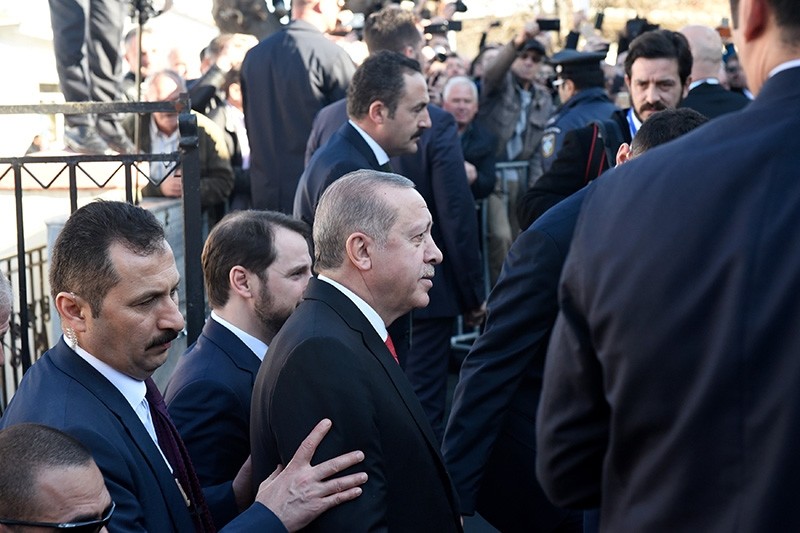 Turkish President Recep Tayyip Erdou011fan arrives at a mosque to attend Friday prayers in the city of Komotini, Greece Dec. 8, 2017. (Reuters Photo)
by Daily Sabah with Agencies Dec 08, 2017 12:00 am

Speaking in Komotini, Greece, in Western Thrace, Erdoğan expressed his desire to leave the problems between the two countries behind, and emphasized the minority rights of the Turkish-Greek population

Presıdent Recep Tayyip Erdoğan said Friday in Greece that his wish is to overcome the problems between Greece and Turkey. President Erdoğan arrived in the Western Thrace region of northeastern Greece to meet with members of the country's Muslim ethnic Turkish minority, where he joined Friday prayers at Kırmahalle Mosque in Komotini (Gümülcine).

"We have approximately 150,000 cognates in here. You are the bridge between Turkey and Greece. We see you as it is. Now, four deputies in the Greek parliament are representing you. These deputies should work really hard," Erdoğan said to the Turkish-originated population of Komotini, while adding that he also has no problem with the Greek-originated Turkish citizens in Turkey.

"We need to continue with this solidarity. We have supported Greece when it left NATO and they accepted again afterward. We need to improve this cooperation," Erdoğan added, while indicating that the unity of Turkish-origin citizens in Greece is very crucial.

Erdoğan said: "As good Greek citizens, you work for yourself as well as this country. In return for that, it is your right to expect an attitude in accordance with the Lausanne Treaty. You being citizens who can speak both Greek and Turkish fluently is also beneficial for Greece."

He also said the issue of clerics is one of the main problems in the region. He said: "There is the understanding of working with a mufti who was appointed here. Yet, this has no place in the Lausanne Treaty. Instead, there is a place for elected muftis," adding that this principle is applied to Christian clerics in Turkey, meaning that a patriarch in Turkey is not appointed but elected by the synod.

"We want you to benefit from all the advantages of the Lausanne Treaty in accordance with the principles of international human rights and European Union acquis. In this respect, we are waiting for the decision from the European Court of Human Rights to be implemented," Erdoğan added.

"Our demand is that the Greek government should not want our brothers to be assimilated."

Erdoğan was greeted by the elected muftis of İskece and Gümülcine as well as representatives of the Turkish community and Bursa Osmangazi Mayor Mustafa Dündar.

After prayers, he met with residents and local officials at the Chris and Eve Mansion Hotel in Komotini before returning to Turkey Friday afternoon.

His address to the Turkish community is expected to be closely followed by Greek officials as the Greek treatment and alleged discrimination against the minority there has been one of several contentious issues dividing the two NATO allies and neighbors.

Komotini became Ottoman territory in the second half of the 14th century, and after that it became a region with a high Turkish population, similar to other parts of the Balkan region.

Due to the compulsory migration that occurred after the 1877-1878 Ottoman-Russian War, the region turned into a temporary housing area, which led to an increase in the Muslim population. In the 1920s, the percentage of Turks, who initially constituted the majority of the Western Thrace population, fell from 85 percent to 30 percent.

Today, there are approximately 150,000 Muslim Turkish minorities that live in Western Thrace. Komotini's total population is 50,990 of which 40 percent is Turkish-originated.

During a publicly aired conversation with Greek officials Thursday, Erdoğan reiterated his call to revise the 1923 Treaty of Lausanne, which set the borders of modern Turkey, citing the conditions of ethnic Turks living in Western Thrace. "You cannot find any discrimination against Turkish citizens of Greek origin in Turkey. However, in Western Thrace, even writing the word 'Turkish' is not allowed."

"Muslims in [Greece's] Western Thrace have not even been allowed to choose their own mufti from their community," Erdoğan said, referring to Muslim scholars who interpret and expound Islamic law, as well as provide counsel for Muslim communities.

Noting that the average income of Turks in Western Thrace is $2,200, Erdoğan said, "Steps for investment and economic development have not been taken, and for this reason, the Lausanne Treaty should be updated."