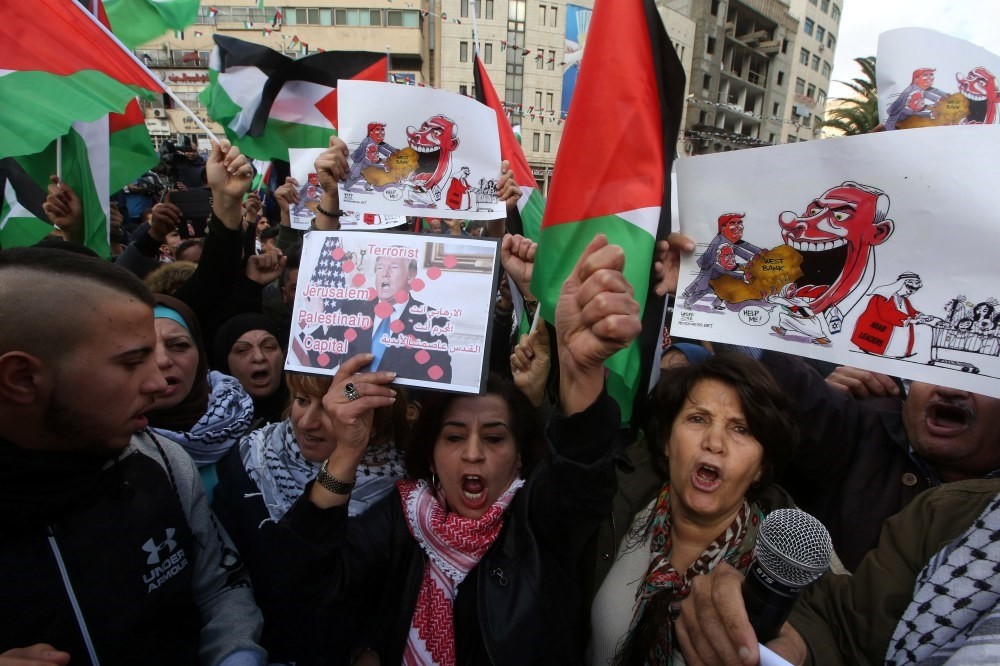 Palestinian protestors shout slogans against the U.S. during a protest in Nablus, West Bank, Dec. 7.
by Özgenur Sevinç Dec 08, 2017 12:00 am

According to experts, Trump's Jerusalem decision is only a step to strengthen his place in domestic politics out of personal concerns

Experts believe that U.S. President Donald Trump's move to recognize Jerusalem as the capital of Israel is to strength his own position in the face of growing challenges in domestic politics and that this announcement will stoke the flames of further conflicts in the region.

"Trump's decision to relocate the U.S. Embassy to Jerusalem is a step taken to protect his own position against the circles within the U.S. aiming to corner the Trump administration," Professor Yaşar Hacısalihoğlu of Istanbul Yeni Yüzyıl University contended. As part of his election campaign, Trump had previously promised to relocate the U.S. Embassy from Tel Aviv to Jerusalem in the run-up to the elections. While Trump has been struggling greatly in domestic politics after he assumed office, it is interpreted by many that by fulfilling his controversial promise and attempting to put an end to a long-standing dispute, Trump believes that this maneuver will play into his hand.

Considering Trump's decision as an attempt to strengthen his power, Muhittin Ataman from Ankara Social Sciences University told Daily Sabah that "this move is a personal one aiming to protect his own position as president."

"Following the elections, there have been attempts to corner the Trump administration, most recently with the Michael Flynn case, which might reach as far as Trump's close family," Hacısalihoğlu said. He added that in an effort to strengthen his position as president in the face of growing challenges in domestic politics and maintain the support of Israeli lobbies, Trump moved to announce the relocation of the U.S. Embassy.

Jerusalem sits at the heart of the conflict between Israel and Palestine as Palestinians hope that East Jerusalem, which is currently occupied by Israel, will become the capital of a future Palestinian state. Both Israelis and Palestinians claim Jerusalem as their capital and previous peace plans have failed over debates on whether and how to divide sovereignty or oversee holy sites. Israel captured East Jerusalem during the 1967 Six-Day War and continues its occupation in the West Bank despite the 1948 agreement.

Sneering at international efforts to resolve the ongoing dispute between Palestine and Israel, Trump asserted that efforts have failed and that new steps need to be taken. "After more than two decades of waivers, we are no closer to a lasting peace agreement between Israel and the Palestinians. It would be folly to assume that repeating the exact same formula would now produce a different or better result," Trump said on Dec. 6 from the White House's Diplomatic Reception Room.

While announcing the move, Trump cited the Jerusalem Embassy Act, which Congress overwhelmingly passed and became law in 1995 and called for moving the U.S. Embassy to Jerusalem during Democrat Bill Clinton's presidency. But Clinton and all of his successors until Trump signed a waiver every six months that suspended the law on the grounds that it would be detrimental to U.S. national security interests. During the announcement, Trump said he did not want to follow the previous U.S. president who refused to recognize Jerusalem as the Israeli capital. Before the announcement, most of the international community warned Trump against the move, insisting it would be obstructive to the fragile peace process. Leaders from Turkey, the EU, U.K., France and the Arab League called on Trump to stick to international law and numerous U.N. resolutions. However, Trump did not heed the warnings.The United Nations Security Council has so far issued 15 resolutions from 1967 to December 2016. Moreover, the U.N. General Assembly issued seven resolutions on the crisis, condemning the Israeli occupation in Jerusalem. The United Nations Educational, Scientific and Cultural Organisation also released six resolutions, citing "continuous [and] intrusive archeological demolitions, excavations and works in East Jerusalem."

While Trump claimed that the move will contribute to peace efforts, Hacısalihoğlu said Trump's decision would fan the flames of conflict in the region.

"The decision of a country to relocate its embassy to Jerusalem does not make Jerusalem the capital of Israel, as this would not be accepted by international law," Hacısalihoğlu said.

Commenting on the reactions to the decision, Ataman said Trump received a deluge of criticism from the international community on the grounds that the decision would further destabilize a region already in turmoil. "Trump's decision, which was made following the process initiated by his son-in-law Jared Kushner, has faced a common reaction from Arab states and, similarly, the decision was condemned in Turkish Parliament, uniting political parties to stand up against the unjust step," Ataman said.

Touching on the impact of Trump's decision on U.S. relations with Turkey, Hacısalihoğlu said the already strained relations would further be damaged with this step, while Turkey expected to strengthen ties when the new administration assumed office in the U.S., Ankara's hopes were dashed when the U.S. continued its relations with the terrorist Democratic Union Party (PYD) in Syria despite warnings from Ankara, and that Turkey is targeted with the recent Zarrab case.