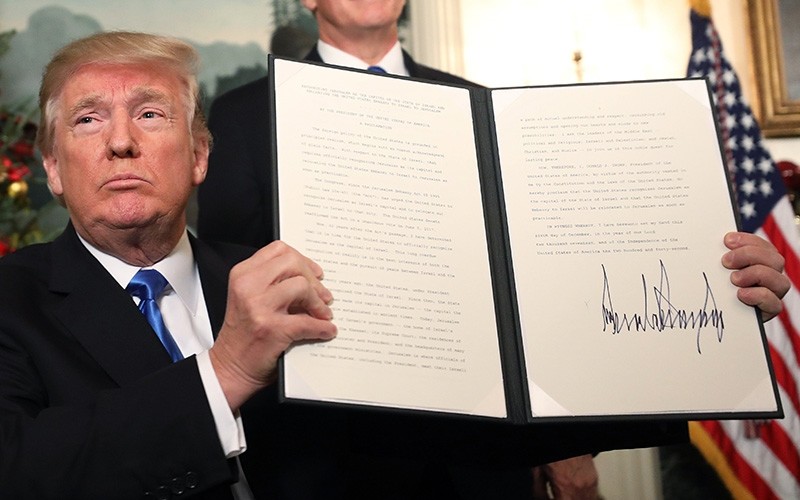 U.S. President Donald Trump signs a proclamantion about his controversial decision to formally recognize Jerusalem as the capital of Israel, and his plan to relocate the U.S. embassy to the city, Washington, D.C., U.S., Dec. 6, 2017. (EPA Photo)
by Daily Sabah Dec 09, 2017 12:00 am

Reactions and condemnations continue to pour since U.S. President Donald Trump officially recognized Jerusalem as the Israeli capital last week. While hundreds of Palestinians who protested Trump’s move faced violence by Israeli forces, many other protests were held around the world as an act of unity with Palestine

Criticism from the international community of U.S. President Donald Trump's decision to recognize Jerusalem as Israel's capital continue, warning that it threatens stability throughout the region.

French President Emmanuel Macron said on Friday that he is "launching an appeal for calm and responsibility."

"Today, in my opinion, the [U.N.] Security Council will meet on this topic. We hope that there our American counterparts will explain how and where they see future steps" in the wake of the decision, Sergey Lavrov was quoted as saying by Russia's official TASS news agency.

Lavrov's remarks came during a news conference at the OSCE foreign ministers meeting in the Austrian capital of Vienna.

He mentioned that U.S. Secretary of State Rex Tillerson told him on Thursday that the U.S. wants to conclude a "deal of the century" to solve the Palestinian-Israeli problem "in one stroke."

The European Union's foreign policy chief on Friday sounded the alarm on the U.S. decision to recognize Jerusalem as Israel's capital, warning of its "very worrying potential impact."

At a joint news conference with Jordanian Foreign Minister Ayman al-Safadi, Federica Mogherini said: "We were in close contact as always, but particularly in these last days during and after the announcement by Mr. Trump on the U.S. decision [on] Jerusalem.

"We both agree that it is a decision that has a very worrying potential impact in this very fragile context.

"No one can afford any further destabilization, and especially those living in the region. ... More violence and chaos are absolutely to be avoided. They are in no one's interest." Lebanese Prime Minister Saad Hariri also said the U.S. decision "will further complicate the peace process and pose an additional challenge to the stability of the whole region." Hariri's brief resignation last month sparked fears of a new proxy conflict in Lebanon. Indonesian President Joko Widodo on Friday called on Muslim countries to unite and reject Trump's move to recognize Jerusalem as the capital of Israel.

Latin American and Caribbean countries also voiced strong opposition Thursday. Eight out of 15 countries on the U.N. Security Council, including Bolivia and Uruguay, called for an urgent meeting of the council to discuss the issue.

The government of Uruguay stressed that the White House's decision, "does not help to improve the climate of peace and mutual respect needed to reach a complete, lasting and fair solution in the Middle East." Bolivian ambassador to the U.N. Sacha Llorenti said the "unilateral decision violates various [U.N.] Security Council and General Assembly resolutions, undermines any attempts to reach a peaceful resolution to the Israeli-Palestinian conflict and makes the already volatile region even more unstable." Mexico, through its Foreign Affairs secretary, said it will maintain its embassy in Tel Aviv. "Mexico will maintain its friendly bilateral relations with the state of Israel … and it will also support the historic claims of the Palestinian people," Mexico's foreign minister said. Venezuela, Ecuador, Argentina, Chile and Cuba are also among the Latin American countries that oppose the decision.

Tanzania on Friday said its embassy in Israel will also remain in Tel Aviv, despite concerted efforts to convince the East African country to move its embassy to Jerusalem.

Meanwhile, protests against the decision around the world continue. Thousands of people in the U.S. city of Chicago marched and protested through downtown on Thursday night, voicing their opposition to Trump's decision. Hundreds of Muslims protested in Indian-controlled Kashmir against Trump's decision concerning Jerusalem. Protesters marched in several places in the main city of Srinagar and other parts of the region after Friday prayers. They chanted slogans such as "Down with America" and "Down with Israel." Similar protests also took place in Jordan, Pakistan, Indonesia, Malaysia and Tunisia. Jordanians chanted "Jerusalem is Arab," as part of a protest against Trump's decision.

Hundreds of Iranians also rallied in the capital, Tehran, and chanted "Death to America" and "Death to Israel" in a show of anger over the decision.